2.What is a probability formula that uses factorials to find the number of possible combinations of all the outcomes in an experiment?

3.Suppose you play a game with two 4-sided dice with sides numbered 1 through 4. If you roll a sum of 8 (face down), you win $10. If you roll anything else, you lose $1. What can you expect to win or lose in this game?

4.Justin is conducting an experiment. He wants to know which type of pet is most preferred among 2nd graders. He asks them if they prefer dogs, cats, or hamsters. Is this a binomial experiment?

5.Suppose you play a game where you spin a spinner (see picture below) with areas of the colors on the spinner broken down as shown: 10% blue, 60% green, and 30% red. In addition, if the spinner lands on red you win 6 points, if it lands on blue you win 1 point, and if it lands on green you lose 5 points. If you keep spinning, how many points can you expect to win or lose per game? 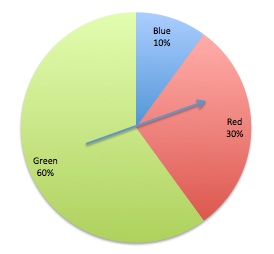