Physical properties of the group 7 elements

Group 7 contains non-metal elements placed in a vertical column on the right of the periodic table. The elements in group 7 are called the halogens.

Group 7 is on the right-hand side of the periodic table, next to group 0

The halogens show trends in their physical and chemical properties.

The table shows the colour and physical states of chlorine, bromine and iodine at room temperature and pressure.

The melting points and boiling points of the halogens increase going down group 7, and their colour gets darker.

The group 7 elements exist as diatomic molecules. Their chemical formulae are F2, Cl2, Br2 and I2.

The bond between the atoms in a molecule is very strong, but the forces of attraction between molecules are weak. This explains why group 7 elements have low boiling points.

From the table of physical properties it can be inferred that the depth of colour of the halogens increases in atomic number. Fluorine is pale yellow, chlorine is green, bromine is orange and iodine is grey. Thus the colour of the Astatine not included in the table can be deduced as being black. 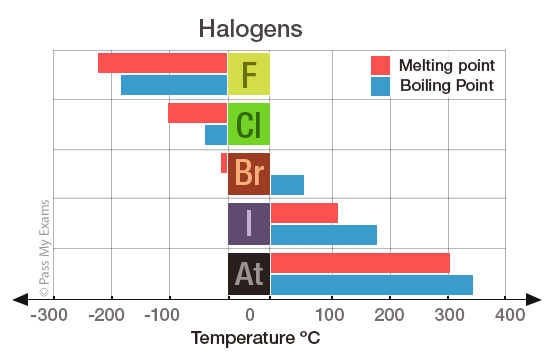 Reaction of halogens with other metals

You can see that the atomic radius increases as you go down the Group.

Explaining the increase in atomic radius

The radius of an atom is governed by

In each case, the outer electrons feel a net pull of 7+ from the nucleus. The positive charge on the nucleus is cut down by the negativeness of the inner electrons.

This is equally true for all the other atoms in Group 7. The outer electrons always feel a net pull of 7+ from the centre.

The only factor which is going to affect the size of the atom is therefore the number of layers of inner electrons which have to be fitted in around the atom. Obviously, the more layers of electrons you have, the more space they will take up – electrons repel each other. That means that the atoms are bound to get bigger as you go down the Group.

Notice that electronegativity falls as you go down the Group. The atoms become less good at attracting bonding pairs of electrons.

Explaining the decrease in electronegativity

The bonding pair of electrons between the hydrogen and the halogen feels the same net pull of 7+ from both the fluorine and the chlorine. (This is exactly the same sort of argument as you have seen in the atomic radius section above.) However, in the chlorine case, the nucleus is further away from that bonding pair. That means that it won’t be as strongly attracted as in the fluorine case.

The larger pull from the closer fluorine nucleus is why fluorine is more electronegative than chlorine is.

Summarising the trend down the Group

As the halogen atoms get bigger, any bonding pair gets further and further away from the halogen nucleus, and so is less strongly attracted towards it. In other words, as you go down the Group, the elements become less electronegative.

It is the energy released (per mole of X) when this change happens.

The first electron affinities of the Group 7 elements

Notice that the trend down the Group isn’t tidy. The tendency is for the electron affinities to decrease (in the sense that less heat is given out), but the fluorine value is out of line.

In the bigger atom, the attraction from the more positive nucleus is offset by the additional screening electrons, so each incoming electron feels the effect of a net 7+ charges from the centre – exactly as when you are thinking about atomic radius or electronegativity.

As the atom gets bigger, the incoming electron is further from the nucleus and so feels less attraction. The electron affinity therefore falls as you go down the Group.

But what about fluorine? That is a very small atom, with the incoming electron quite close to the nucleus. Why isn’t its electron affinity bigger than chlorine’s?

There is another effect operating. When the new electron comes into the atom, it is entering a region of space already very negatively charged because of the existing electrons. There is bound to be some repulsion, offsetting some of the attraction from the nucleus.

In the case of fluorine, because the atom is very small, the existing electron density is very high. That means that the extra repulsion is particularly great and lessens the attraction from the nucleus enough to lower the electron affinity below that of chlorine.

You will see that both melting points and boiling points rise as you go down the Group.

If you explore the graphs, you will find that fluorine and chlorine are gases at room temperature, bromine is a liquid and iodine a solid. Nothing very surprising there!

Explaining the trends in melting point and boiling point

All of the halogens exist as diatomic molecules – F2, Cl2, and so on. The intermolecular attractions between one molecule and its neighbours are van der Waals dispersion forces.

As the molecules get bigger there are obviously more electrons which can move around and set up the temporary dipoles which create these attractions.

The stronger intermolecular attractions as the molecules get bigger means that you have to supply more heat energy to turn them into either a liquid or a gas – and so their melting and boiling points rise.

Fluorine reacts violently with water to give hydrogen fluoride gas (or a solution of hydrofluoric acid) and a mixture of oxygen and ozone. So thinking about its solubility is pointless.

Chlorine, bromine and iodine all dissolve in water to some extent, but there is no pattern in this. The following table shows the solubility of the three elements in water at 25°C.

Chlorine reacts with water to some extent to give a mixture of hydrochloric acid and chloric(I) acid – also known as hypochlorous acid. The reaction is reversible, and at any one time only about a third of the chlorine molecules have actually reacted.

You will sometimes find the chloric(I) acid written as HOCl. That represents the way the atoms are actually joined together.

Bromine and iodine do something similar, but to a much lesser extent. In both cases, about 99.5% of the halogen remains as unreacted molecules.

The solubility of iodine in potassium iodide solution

Although iodine is only faintly soluble in water, it does dissolve freely in potassium iodide solution to give a dark red-brown solution. There is a reversible reaction between iodine molecules and iodide ions to give I3– ions. These are responsible for the colour.

In the lab, iodine is often produced by oxidation of a solution containing iodide ions, so this colour is actually quite familiar. As long as there are any excess iodide ions present, the iodine will react with them to make the I3– ions. Once the iodide ions have all reacted, the iodine is precipitated as a dark grey solid, because there isn’t anything left for it to react with to keep it in solution.

The halogens are much more soluble in organic solvents like hexane than they are in water. Both hexane and the halogens are non-polar molecules attracted to each other by van der Waals dispersion forces.

That means that the attractions broken (between hexane molecules and between halogen molecules) are similar to the new attractions made when the two substances mix.

The colours of the solutions formed are much what you would expect. Solutions of iodine in organic solvents tend to be pinky-purple colour.

Bond enthalpy is the heat needed to break one mole of a covalent bond to produce individual atoms, starting from the original substance in the gas state, and ending with gaseous atoms.

So for chlorine, Cl2(g), it is the heat energy needed to carry out this change per mole of bond:

For bromine, the reaction is still from gaseous bromine molecules to separate gaseous atoms.

Bond enthalpy in the halogens, X2(g)

A covalent bond works because the bonding pair is attracted to both the nuclei at either side of it. It is that attraction which holds the molecule together. The size of the attraction will depend, amongst other things, on the distance from the bonding pair to the two nuclei.

As with all halogens, the bonding pair will feel a net pull of 7+ from both ends of the bond – the charge on the nucleus offset by the inner electrons. That will still be the same whatever the size of the halogen atoms.

As the atoms get bigger, the bonding pair gets further from the nuclei and so you would expect the strength of the bond to fall.

So . . . are the actual bond enthalpies in line with this prediction?

The bond enthalpies of the Cl-Cl, Br-Br and I-I bonds fall just as you would expect, but the F-F bond is way out of line!

Because fluorine atoms are so small, you might expect a very strong bond – in fact, it is remarkably weak. There must be another factor at work as well.

In the case of fluorine, this repulsion is great enough to counteract quite a lot of the attraction between the bonding pair and the two nuclei. This obviously weakens the bond.

As the halogen atom gets bigger, the bonding pair gets more and more distant from the nucleus. The attraction is less, and the bond gets weaker – exactly what is shown by the data. There is nothing complicated happening in this case.

This is important in the thermal stability of the hydrogen halides – how easily they are broken up into hydrogen and the halogen on heating.

Hydrogen fluoride and hydrogen chloride are very stable to heat. They don’t split up into hydrogen and fluorine or chlorine again if heated to any normal lab temperature.

Hydrogen bromide splits slightly into hydrogen and bromine on heating, and hydrogen iodide splits to an even greater extent.

As the bonds get weaker, they are more easily broken.