Transistor is an active component and that is establishing in all over electronic circuits. They are used as amplifiers and switching apparatus. As the amplifiers, they are used in high and low level, frequency stages, oscillators, modulators, detectors and in any circuit need to perform a function. In digital circuits they are used as switches.

There are a huge number of manufacturers approximately the world who produces semiconductors (transistors are members of this family of apparatus), so there are exactly thousands of different types. There are low, medium and high power transistors, for functioning with high and low frequencies, for functioning with very high current and or high voltages. This article gives an overview of what is a transistor, different types of transistors and its applications.

Field Effect Transistors are made up of 3 regions, a gate, a source, and a drain. Different bipolar transistors, FETs are voltage-controlled devices. A voltage placed at the gate controls current flow from the source to the drain of the transistor. Field Effect transistors have a very high input impedance, from several mega ohms (MΩ) of resistance to much, much larger values. This high input impedance causes them to have very little current run through them. (According to ohm’s law, current is inversely affected by the value of the impedance of the circuit. If the impedance is high, the current is very low.) So FETs both draw very little current from a circuit’s power source.

Thus, this is ideal because they don’t disturb the original circuit power elements to which they are connected to. They won’t cause the power source to be loaded down. The drawback of FETs is that they won’t provide the same amplification that could be gotten from bipolar transistors. Bipolar transistors are superior in the fact that they provide greater amplification, even though FETs are better in that they cause less loading, are cheaper, and easier to manufacture. Field Effect Transistors come in 2 main types: JFETs and MOSFETs. JFETs and MOSFETs are very similar but MOSFETs have an even higher input impedance values than JFETs. This causes even less loading in a circuit.

A Darlington transistor sometimes called as a “Darlington pair” is a transistor circuit that is made from two transistors. Sidney Darlington invented it. It is like a transistor, but it has much higher ability to gain current. The circuit can be made from two discrete transistors or it can be inside an integrated circuit. The hfe parameter with a Darlington transistor is every transistors hfe multiplied mutually. The circuit is helpful in audio amplifiers or in a probe that measures very small current that goes through the water. It is so sensitive that it can pick up the current in the skin. If you connect it to a piece of metal, you can build a touch-sensitive button.

A Schottky transistor is a combination of a transistor and a Schottky diode that prevents the transistor from saturating by diverting the extreme input current. It is also called a Schottky-clamped transistor.

In this way, both gates influence the level of current flowing between the source and drain. In effect, the dual gate MOSFET operation can be considered the same as two MOSFET devices in series. Both gates affect the general MOSFET operation and therefore the output. The dual gate MOSFET can be used in a lot of applications including RF mixers /multipliers, RF amplifiers, amplifiers with gain control and the like.

The Junction Field Effect Transistor (JUGFET or JFET) has no PN-junctions but in its place has a narrow part of high resistivity semiconductor material forming a “Channel” of either N-type or P-type silicon for the majority carriers to flow through with two ohmic electrical connections at either end normally called the Drain and the Source respectively. There are a two basic configurations of junction field effect transistor, the N-channel JFET and the P-channel JFET. The N-channel JFET’s channel is doped with donor impurities meaning that the flow of current through the channel is negative (hence the term N-channel) in the form of electrons.

Transistors not particularly designed for the purpose can have reasonably consistent avalanche properties; for example 82% of samples of the 15V high-speed switch 2N2369, manufactured over a 12-year period, were capable of generating avalanche breakdown pulses with rise time of 350 ps or less, using a 90V power supply as Jim Williams writes.

The appropriate application of power semiconductors requires an understanding of their maximum ratings and electrical characteristics, information that is presented within the device data sheet. Good design practice employs data sheet limits and not information obtained from small sample lots. A rating is a maximum or minimum value that sets a limit on device’s ability. Act in excess of a rating can result in irreversible degradation or device failure. Maximum ratings signify extreme capabilities of a device. They are not to be used as design circumstances.

A characteristic is a measure of device performance under individual operating conditions expressed by minimum, characteristic, and/or maximum values, or revealed graphically.

Thus, this is all about what is a transistor and different types of transistors and its applications. We hope that you have got a better understanding of this concept or to implement electrical and electronics projects, please give your valuable suggestions by commenting in the comment section below. Here is a question for you, what is the main function of a transistor? 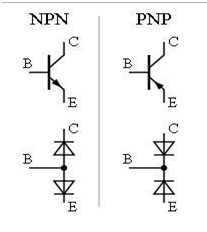 Transistors are the most important semiconductor active devices essential for almost all circuits. They are used as electronic switches, amplifiers etc in circuits. Transistors may be NPN, PNP, FET, JFET etc which have different functions in electronic circuits. For the proper working of the circuit, it is necessary to bias the transistor using resistor networks. Operating point is the point on the output characteristics that shows the Collector-Emitter voltage and the Collector current with no input signal. The Operating point is also known as the Bias point or Q-Point (Quiescent point).

For setting the correct Q-Point of the transistor, a collector resistor is used to set the collector current to a constant and steady value without any signal in its base. This steady DC operating point is set by the value of the supply voltage and the value of the base biasing resistor. Base bias resistors are used in all the three transistor configurations like common base, common collector and Common emitter configurations. 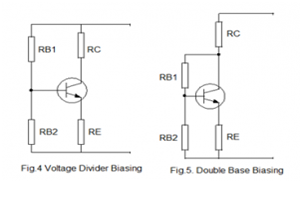 Following are the different modes of transistor base biasing:

As shown in the Fig.1, two resistors RC and RB are used to set the base bias. These resistors establish the initial operating region of the transistor with a fixed current bias.

The transistor forward biases with a positive base bias voltage through RB.  The forward base-Emitter voltage drop is 0.7 volts. Therefore the current through RB is IB = (Vcc – VBE ) / IB

By using two resistors RB1 and RB2 increases the stability with respect to the variations in Beta by increasing the current flow through the base bias resistors. In this configuration, the current in RB1 is equal to 10 % of the collector current.

Fig.4 shows the Voltage divider biasing in which two resistors RB1 and RB2 are connected to the base of the transistor forming a voltage divider network. The transistor gets biases by the voltage drop across RB2. This kind of biasing configuration is used widely in amplifier circuits.