This unit explains transfer of heat

Heat can be transferred by conduction, convection and radiation. It is only transferred from hotter things to cooler things.

In a hot solid, particles vibrate more. They collide with the particles next to them and set them vibrating. The kinetic energy is transferred from particle to particle. Metals are the best conductors. Solids are better than liquids. Gases are very poor conductors. They are insulators.

Atoms in a substance are always vibrating.If the substance gets hotter, the atoms vibrate more. The heat energy is given to the atoms, which makes them move about faster

Every time they collide with another atom, the heat energy is transferred. This is how heat travels through a solid

The video below shows how heat transfer occurs through conduction

In a hot fluid (gas or liquid) the particles have more kinetic energy so they move more. They spread out and the fluid becomes less dense. The hot fluid rises above the denser cold fluid forming a convection current.

When hot air rises, colder air has to move in to replace it. Convection cannot happen in solids, as the atoms aren’t able to move around 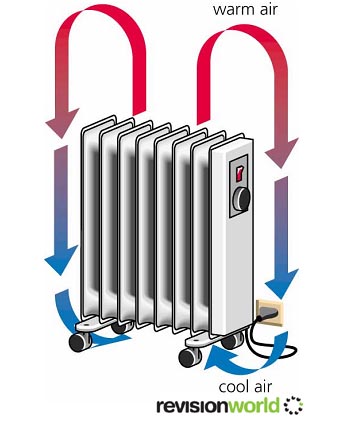 The video below explains how heat transfer occurs by convection

All objects emit and absorb infrared radiation. The higher the temperature the more they emit.

When objects absorb this energy their temperature increases.

Radiation will travel through a vacuum – it does not need a medium (material) to pass through:

The video below explains about how heat transfer occurs by Radiation

When we insulate our homes we reduce the heat lost, we use less fuel and it costs less. Still air is a good insulator, so materials with air trapped in them are often used:

All these improvements cost money to buy and install, but they save money on fuel costs. You can work out the payback timewhich is the time it takes before the money spent on improvements is balanced by the fuel savings, and you begin to save money:

If the price of the fuel increases, the payback time will be less. 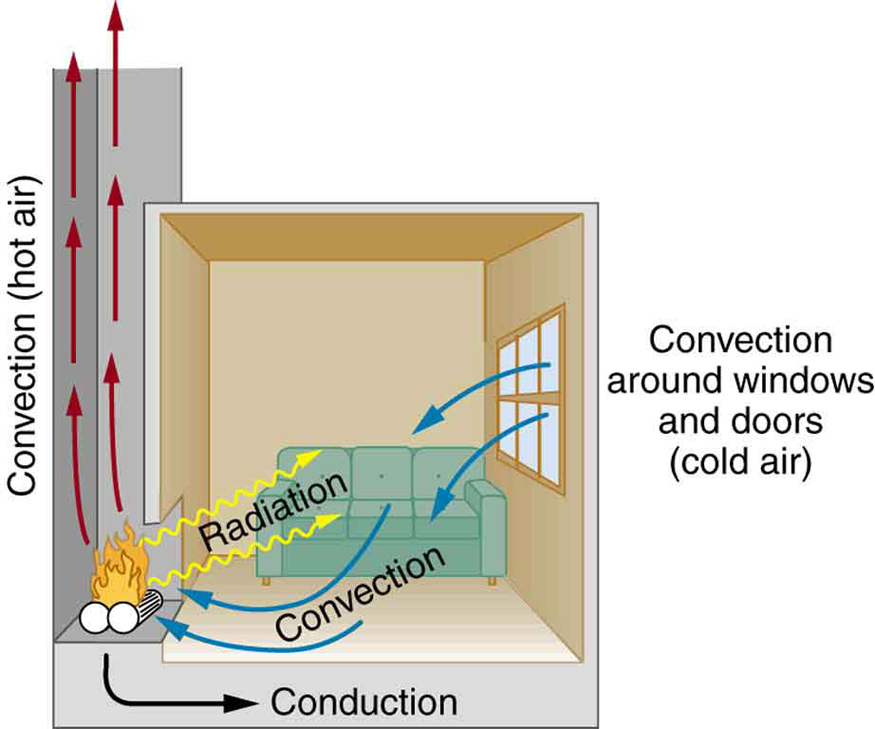 We examine these methods in some detail in the three following modules. Each method has unique and interesting characteristics, but all three do have one thing in common: they transfer heat solely because of a temperature difference.

What are the main methods of heat transfer from the hot core of Earth to its surface? From Earth’s surface to outer space?

When our bodies get too warm, they respond by sweating and increasing blood circulation to the surface to transfer thermal energy away from the core. What effect will this have on a person in a

shows a cut-away drawing of a thermos bottle (also known as a Dewar flask), which is a device designed specifically to slow down all forms of heat transfer. Explain the functions of the various parts, such as the vacuum, the silvering of the walls, the thin-walled long glass neck, the rubber support, the air layer, and the stopper.

The construction of a thermos bottle is designed to inhibit all methods of heat transfer. 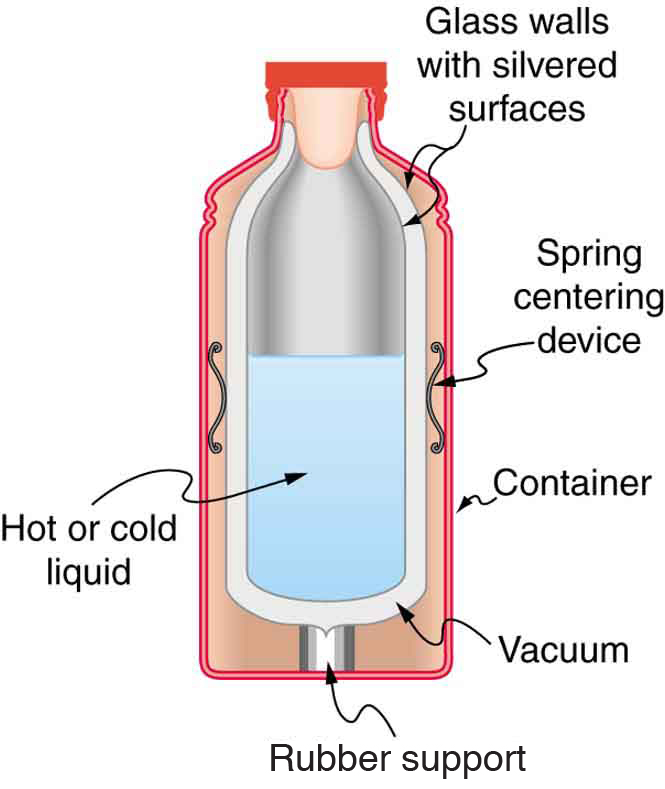 Calculating Heat Transfer by Convection: Convection of Air Through the Walls of a House.

Most houses are not airtight: air goes in and out around doors and windows, through cracks and crevices, following wiring to switches and outlets, and so on. The air in a typical house is completely replaced in less than an hour.

Suppose that a moderately-sized house has inside dimensions 12.0m×18.0m×3.00m high, and that all air is replaced in 30.0 min. Calculate the heat transfer per unit time in watts needed to warm the incoming cold air by 10.0 ºC, thus replacing the heat transferred by convection alone.

Q=mcΔT. The rate of heat transfer is then Q/t

t is the time for air turnover. We are given that ΔT

ΔT is 10.0ºC, but we must still find values for the mass of air and its specific heat before we can calculate Q

c=cp≅1000J/kg⋅C (note that the specific heat at constant pressure must be used for this process).

(1) Determine the mass of air from its density and the given volume of the house. The density is given from the density ρ

(2) Calculate the heat transferred from the change in air temperature: Q=mcΔT

(3) Calculate the heat transfer from the heat Q

Q and the turnover time t

This rate of heat transfer is equal to the power consumed by about forty-six 100-W light bulbs.

Newly constructed homes are designed for a turnover time of 2 hours or more, rather than 30 minutes for the house of this example. Weather stripping, caulking, and improved window seals are commonly employed. More extreme measures are sometimes taken in very cold (or hot) climates to achieve a tight standard of more than 6 hours for one air turnover. Still longer turnover times are unhealthy, because a minimum amount of fresh air is necessary to supply oxygen for breathing and to dilute household pollutants. The term used for the process by which outside air leaks into the house from cracks around windows, doors, and the foundation is called “air infiltration.”