Introduction to General Properties of the Transition Elements

The elements with incompletely filled d-subshell in their ground state or most stable oxidation state are named as D-block elements. They are additionally named as transition elements. The partially filled subshells incorporate the (n-1) d subshell. All the d-block elements have a similar number of electrons in the furthest shell. Consequently, they indicate comparable chemical properties.

Fig. 1: Position of d- block elements in the periodic table

The d-block incorporates three series each of ten elements. These series are portrayed by the totally filled 3d, 4d and 5d subshells and are named as 3d-(first series) Sc – Zn, 4d series (second series) Y-Cd and the 5d series (third series) La-Hg separately. There is a fragmented fourth series comprising of just three elements specifically Ac, Ku, and Ha. In these elements, the 6d subshell begins to fill at Ac. 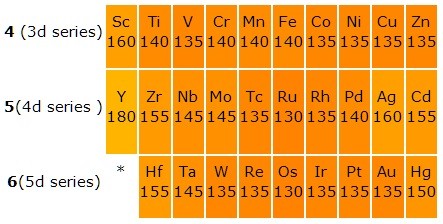 Fig. 4: Properties of the first transition series of Elements

​Since the number of electrons in the peripheral shell is less, all the transition elements are metals. They demonstrate the qualities of metals, for example, ductility and malleability in nature and shape alloys with a few different metals. They likewise serve as great conductors of electricity and heat. Aside from Mercury which is fluid and delicate like alkali metals all the transition elements are hard and fragile, not at all like the non-transition elements. The hard and fragile nature of these elements demonstrates the nearness of covalent bond which is because of the nearness of unfilled d-orbitals. Be that as it may, their property, for example, great conductivity is a sign for the existence of metallic bonding. Thus, they are said to frame covalent bonding and the metallic bonding.

They indicate high melting and boiling points. This can be credited to the nearness of solid metallic bonding because of the overlapping of (n-1)d orbitals and covalent bonding of the unpaired d orbital electrons. Since Zn, Cd and Hg have totally filled (n-1)d orbitals they are not anticipated that they would frame covalent bonds. Thus, they demonstrate lower melting point as compared to other d-block elements.

An extraordinary variation is found in the nuclear radii over every transition series. The nuclear radii of the d-block elements inside a given series decrease with increment in the nuclear number. This is because of the expansion in the atomic charge that attracts the electron cloud inwards bringing about a decrease in size. Notwithstanding, a uniform reduction in nuclear radius is not seen over a period. The abatement in nuclear radii is small as contrasted with the S and P block elements. This is because of the screening impactbrought about by the electrons of the (n-1)d subshell on the peripheral shell. Subsequently, the nucleus can’t pull the furthest electrons. Consequently, the size of the particle does not modify much in moving from Cr to Cu.

The nuclear radius increases as we move down the group. In a given series, the nuclear radius declines to the lowest value for the group VIII elements and after that, it increments towards the end of the series. This expansion in radius towards the finish of the series is because of the force of repulsion among the additional electrons. A close similitude is seen in the radii of the elements of the second and third transition series because of the filling of 4f subshells.

The nuclear size or ionic radii of tri-positive lanthanide particles demonstrate a stable and progressive decline with the expansion in nuclear number from La to Lu. In spite of the fact that they demonstrate a few anomalies, the ionic radii diminish relentlessly from La to Lu. This slow decrease in the size with expanding nuclear number is called lanthanide contraction. Fig. 5: Variation in atomic radius of transition metals as a function of the periodic table group number

The pattern of ionic radius is similar to the atomic radii pattern. Hence, for ions of a given charge the radius decreases gradually with an increment in atomic number.

The nuclear volume of transition elements is much lower than those of S and P block elements. This is a result of the filling of the (n-1)d orbitals that cause an expansion in the atomic charge and pulls the electrons internally. This leads to a diminishment in nuclear volume. With the decline in the nuclear volume, the nuclear thickness of these elements increments. Osmium consists of the highest density.

In a given transition series, the thickness increments in moving over the period and achieves the greatest value at group VIII.

Transition elements have high ionization energy because of their small size. Their ionization potentials lie between those of S and P block elements. Subsequently, they are less electropositive than the s-block elements. Henceforth, they don’t shape ionic compounds promptly as compared to the alkali and alkaline earth metals. They likewise have the capacity to frame covalent compounds.

The ionization potentials of d-block elements increment as we move over every series from left to right. Be that as it may, the expansion is not as much as in the occurrence of S and P blocks elements. This is because of the screening impact created by the new electrons that are included into the (n-1)d subshell.

The second ionization energies of the primary transition series additionally increment with the expansion in nuclear number. Be that as it may, Cr and Cu are adequately higher than those of their neighbors. This is because of their stable electronic configuration.

All the transition elements, aside from the first and last individuals from the series, display various oxidation states. They indicate variable valency in their compounds. Some fundamental oxidation conditions of the primary, second and third transition series elements are given beneath in tables. 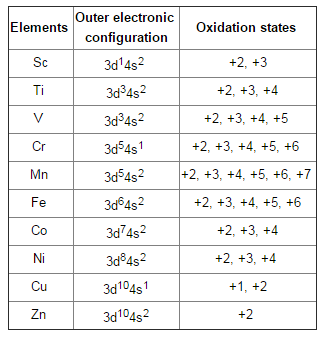 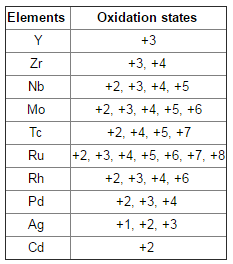 Cause for Variable Oxidation States

The valence electrons of the transition elements are in (n-1) d and ns orbitals which have a little distinction in energies. Both energy levels can be utilized as a part of bond development.

They demonstrate the +2 oxidation state because of the 2 electrons in ns orbitals when the electrons of (n-1) d stay unaffected.

The higher oxidation state from +3 to +7 is because of the utilization of all 4s and 3d electrons in the transition series of elements. In the excited state, the (n-1) d electrons get to be bonding and give the variable states to the iota. Subsequently, the variable oxidation state is because of the support of both ns and (n-1) d orbitals in bonding.

Some important features of oxidation state of transition metals are: The paramagnetic character emerges in view of the nearness ofunpaired electrons. Paramagnetic substances are the substances which are pulled in by the magnetic field.

Diamagnetic character emerges as a result of the nonappearance of unpaired electrons. Diamagnetic substances are the substances which are repulsed by the magnetic field.

where, n = number of unpaired electrons

Ti3+ – The number of unpaired electrons is 1.

Bigger the magnetic moment’s value, the more noteworthy is the paramagnetic character.

Notwithstanding paramagnetic and diamagnetic substance, there are a couple of substances, for example, iron which is exceedingly magnetic when contrasted with other metals.

These substances are known as Ferromagnetic Substances.

In the case of transition metal ions, under the influence of ligands, the degeneracy of the 5 d-orbitals is lost and they separate into two distinct energy levels.