This sub unit explains the regulation of glucose in human bodies

This is the process by which the levels of blood sugar, primarily glucose, are maintained by the body within a narrow range. This tight regulation is referred to as glucose homeostasis. Insulin, which lowers blood sugar, and glucagon, which raises it, are the most well-known of the hormones involved, but more recent discoveries of other glucoregulatory hormones have expanded the understanding of this process.

Insulin and glucagon are hormones secreted by islet cells within the pancreas. They are both secreted in response to blood sugar levels, but in opposite fashion!

As can be seen in the picture, insulin has an effect on a number of cells, including muscle, red blood cells, and fat cells.  In response to insulin, these cells absorb glucose out of the blood, having the net effect of lowering the high blood glucose levels into the normal range.

THIS VIDEO IS ABOUT REGULATION OF GLUCOSE

When blood glucose goes LOW, however, (such as between meals, and during exercise) more and more glucagon is secreted. Like insulin, glucagon has an effect on many cells of the body, but most notably the liver.

The role of Glucagon in blood Glucose control

The effect of glucagon is to make the liver release the glucose it has stored in its cells into the bloodstream, with the net effect of increasing blood glucose. Glucagon also induces the liver (and some other cells such as muscle) to make glucose out of building blocks obtained from other nutrients found in the body (eg, protein).

Our bodies desire blood glucose to be maintained between 70 mg/dl and 110 mg/dl (mg/dl means milligrams of glucose in 100 milliliters of blood). Below 70 is termed “hypoglycemia.” Above 110 can be normal if you have eaten within 2 to 3 hours.

That is why your doctor wants to measure your blood glucose while you are fasting…it should be between 70 and 110.  Even after you have eaten, however, your glucose should be below 180. Above 180 is termed “hyperglycemia” (which translates to mean “too much glucose in the blood”). If your 2 two blood sugar measurements above 200 after drinking a sugar-water drink (glucose tolerance test), then you are diagnosed with diabetes.

Anatomy of the pancreas 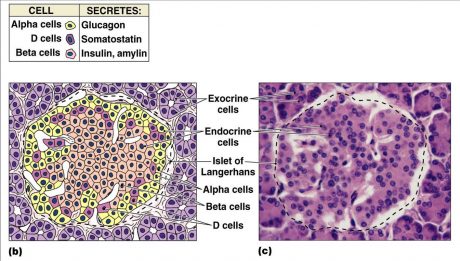 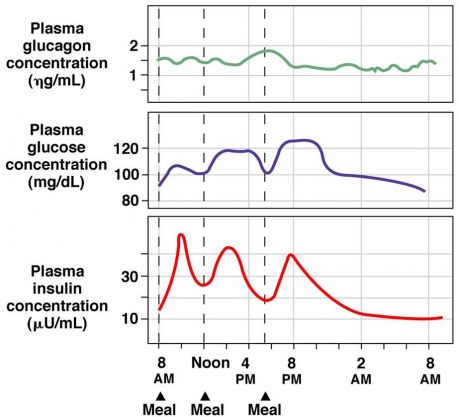 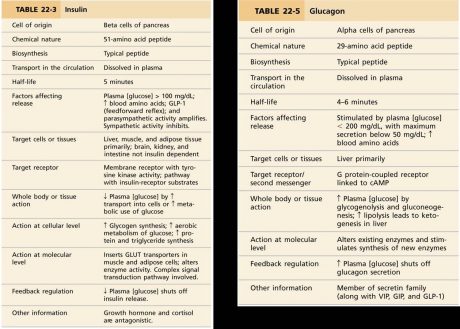 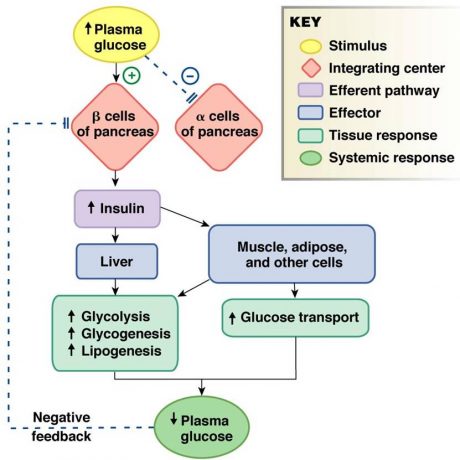 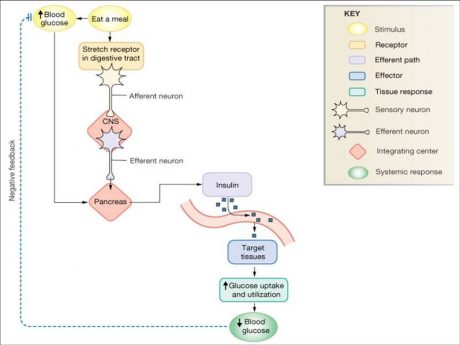 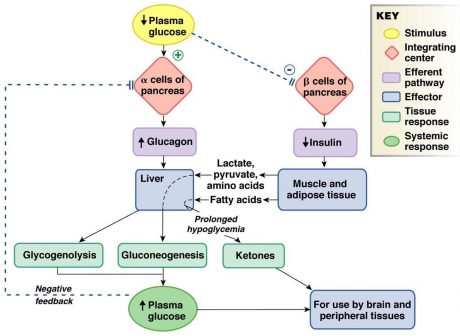 – Increases glucose transport into most, but not all, insulin-sensitive cells
– Enhances cellular utilization and storage of glucose
– Enhances utilization of amino acids
– Promotes fat synthesis

In the absence of insulin, glucose cannot enter the cell 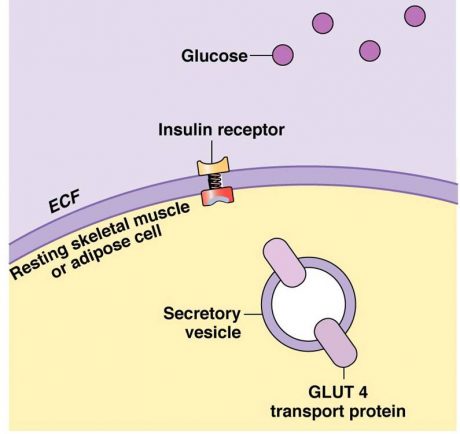 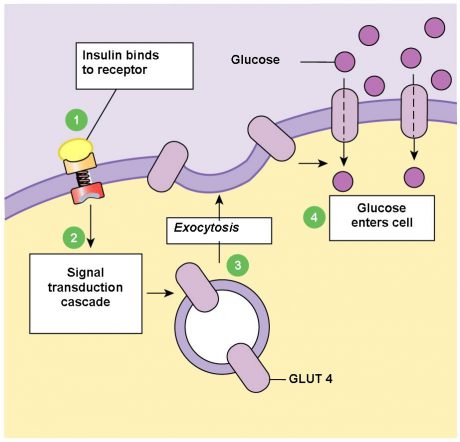 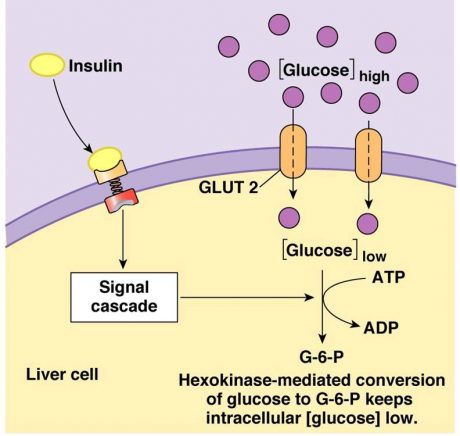 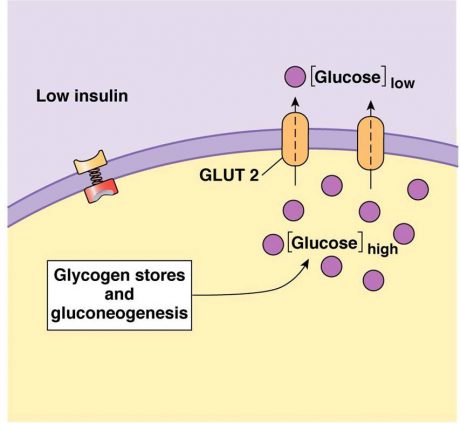 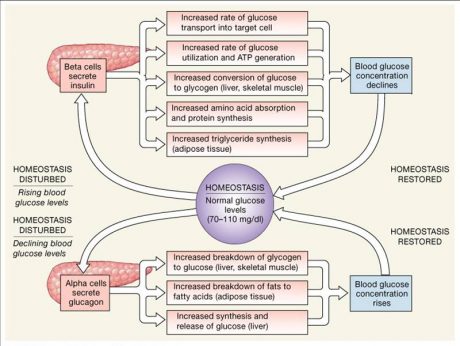 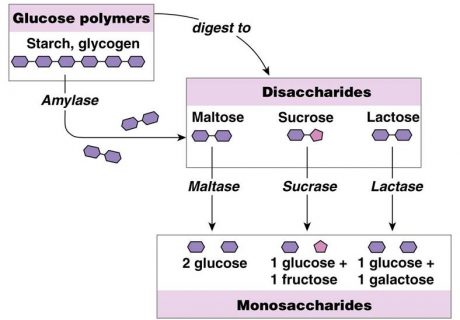 Carbohydrate Absorption in the Small Intestine:

Absorption: via cotransport with Na+, and facilitated diffusion
Enter the capillary bed in the villi
Transported to the liver via the hepatic portal vein 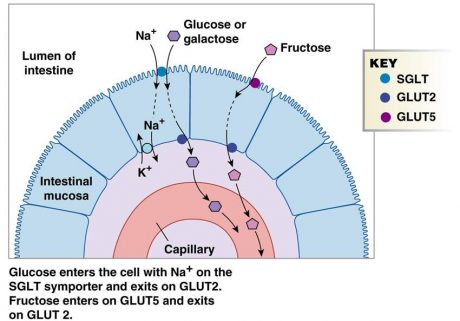 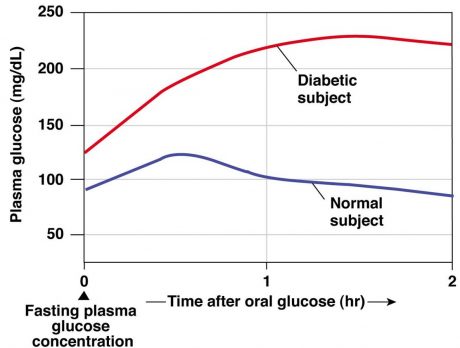 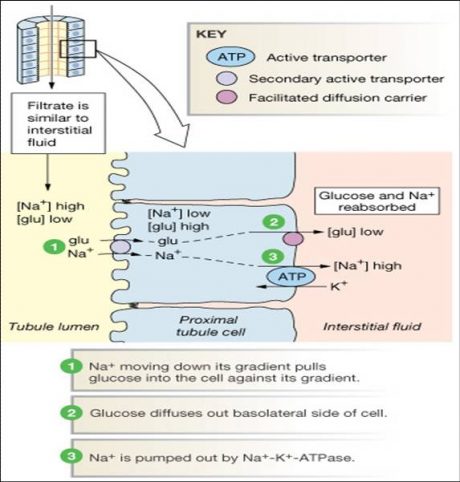 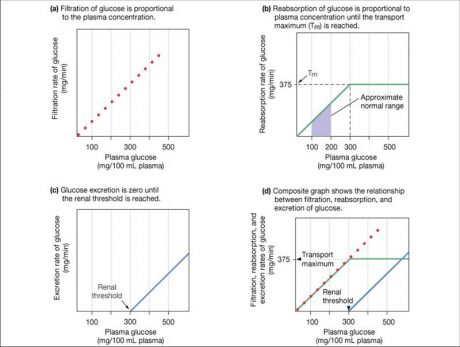 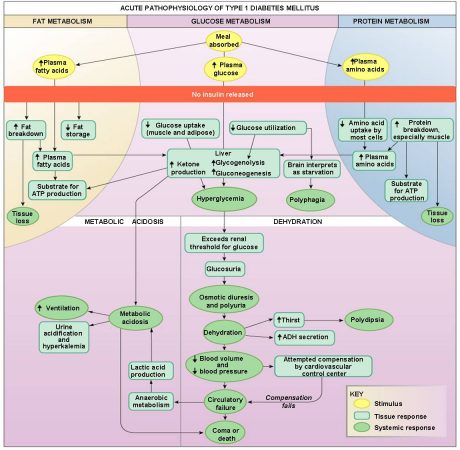 Type 2 diabetes mellitus is characterized differently and is due to insulin resistance or reduced insulin sensitivity, combined with relatively reduced insulin secretion which in some cases becomes absolute. The defective responsiveness of body tissues to insulin almost certainly involves the insulin receptor in cell membranes

– Accounts for 90% of all diabetics
– Complications include atherosclerosis, neurological changes, renal failure, and blindness
– Therapy

As intensity of exercise increases, so does the rate of catecholamine release for glycogenolysis
During endurance events the rate of glucose release very closely matches the muscles need
When glucose levels become depleted, glucagon and cortisol levels rise significantly to enhance gluconeogenesis.

Glucose must not only be delivered to the cells, it must also be taken up by them. That job relies on insulin.
Exercise may enhance insulin’s binding to receptors on the muscle fiber.
Up-regulation (receptors) occurs with insulin after 4 weeks of exercise to increase its sensitivity (diabetic importance).

The effects of exercise on glucose tolerance and insulin secretion 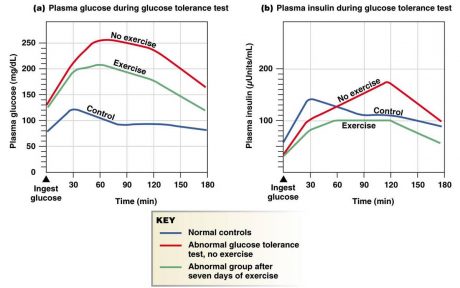