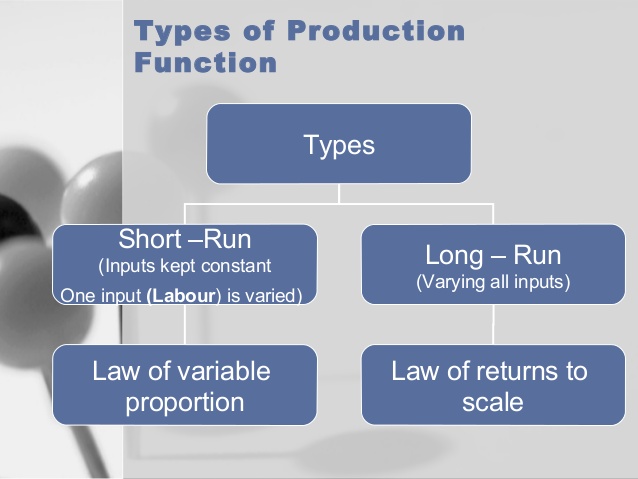 Definition: Production function is a technical and mathematical relationship describing the manner and extent to which a particular product depends upon the quantities of inputs or services of inputs, used at a given level of technology and in a given period of time. It shows the quantity of output that can be produced using different levels of inputs.

It refers to the relationship between the input of factor services and the output of the resultant product. The production function is based on the idea that the amount of output in a production process depends upon the amount of inputs used in the process

A production function can be expressed in different ways: in written form, enumerating and describing the inputs that have a bearing on the output; by listing inputs and the resulting outputs numerically in a table; depicting in the form of a graph or a diagram; and in the form of an algebraic equation. Symbolically, a production function can be written as

8. The exact nature of any production function is assumed to be determined by a set of technical decisions taken by the producer.

Several types of production functions used in agriculture are as follows:

y = a0 + bx where a0 is the intercept and b is the slope of the function. It is not commonly used in research because it violates the basic assumptions of characteristic functional analysis.

In production one or a combination of the following relationships are commonly observed: