This unit is about X-rays and how they work in physics.

X-rays are of short wave length (electromagnetic waves which are produced when cathode rays are stopped by heavy metals).

When the cathode rays [electrons] strike the Tungsten target, 99 % of the kinetic energy of electrons is dissipated into heat while 1% is turned into x-rays.  The heat generated at the target is cooled by means of cooper cooling fins mounted on the copper anode.

Heat is conducted from the target away from the tube by conduction and radiation.

The x – ray tube is covered by a lead shield with a small widow for the x – rays to prevent the leakages of the X rays.

Hard x rays have a high penetrating power. This because they have very short wave lengths. They are produced when a high p.d is applied across the tube. Soft x rays are produced by electrons moving at relatively lowers velocities than these produced by hard x rays. They have less energy; longer wave lengths, hence less penetration power compared to hard x rays. Hard x -rays can penetrate flesh but are absorbed by bones .Soft x-rays are used to show malignant growths since they only penetrate soft flesh. They are absorbed by such growth.

-They travel in a straight line at a speed of light.

-They are not deflected by both magnetic and electric fields. This indicates that they carry no charge.

-They penetrate all matter to extend. Penetration is least in materials with high destiny and atomic number e.g lead.

-They ionize gases through which they pass.

-They cause fluorescence in some materials.

-They cause photographic effect when they are illuminated on certain metal surfaces.

-They are different by crystals leading to an interference pattern.

2-Crystallography: orientation and identification of minerals by analysis of diffraction patterns using B rays law.

a) Analytical uses. These include location of fractures, cancer and tumor defective tissue absorbs x-rays differently from normal tissue.

b)Therapeutics use for destroying cancerous cells and tumors

-Cause Gene mutation (genetic charge in our bodies)

-Cause damage of our eye sight and blood.

As highly important to remember that each time you are exposed to x-rays ,your health is also at risk yet we cannot live cannot them.

-When exposure is necessary, keep it as short as possible.

-X-rays beams should only be restricted to the body part being investigated.

-A worker should wear a shielding jacket with a layer of lead.

-Exposure should be avoided for unborn babies and very young children.

It consists of an anode usually inform of a nickel cylinder which surrounds the cathode in an evacuated glass bulb. In the indirectly headed cathode type, the cathode is nickel tube with a tungsten filament (or heater) inside it. The heater is insulated electrically from the cathode by packing alumina inside the nickel tube. The outside of the tube is coated with a mixture of Barium and strontium oxides.

Symbol of a diode 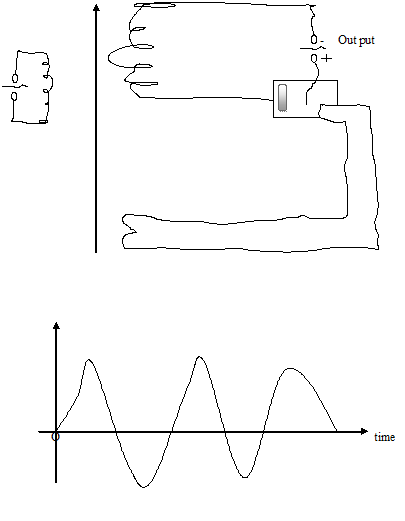 Region AB: Have Va is small. Only these electrons emitted with high speed will be able to reach the anode. The majorities of the electrons is emitted with low kinetic energies and are repelled back towards the cathode. The electron distribution around the cathode constitutes a negative space charge, the current la is small.

Region BC: As Va increases the attraction of the space charge by the anode increases. This result in a large anode current .This region is called space charge limited region.

Applications of the thermionic diode

Suppose a thermionic diode is connected in series with a source of alternating voltage V1 and a load R1. 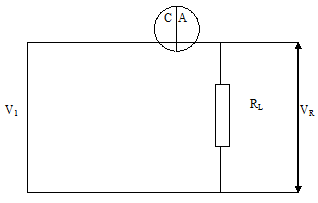 The input and output voltage ware forms are compared in the diagram below.

When p is at negative potential relative to q , diode D conducts whereas D2 doesn’t.

When p is at a positive potential relative to q, diode D2 conducts whereas D1 doesn’t. Current flows in the same direction through the load R1 during both positive and negative cycles of the input voltage V2.

The input and output voltage ware forms are compared in the diagram below. 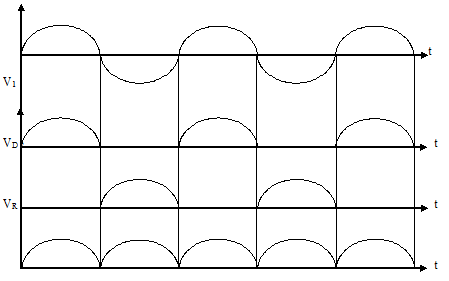 Vd1 and Vd2 is output pd due to conduction of diode D1 and D2 respectively.

Vr is the output voltage across load Rb.

The following rectifier symbols will be used.

During the half cycles when A is at positive potential relative to B , diodes D2 and D3 are forward biased hence they conduct and current flows through the resistor R in the direction p to Q. Diodes D2 and D4 are reverse biased and they do not conduct.

During the half cycles when B is at positive potential relative to A, diode Di and D4 are forward biased and they conduct. Currents flows through resister R in the direction p to q. Diodes D2 and D3 are reverse biased and do not conduct.

The voltage cross R will have the form;

THIS VIDEO SHOWS MORE ABOUT X-RAYS.