This Unit is about waves and sound as studied in physics.

A wave is a disturbance from an equilibrium position that travels with a velocity from one region to another.

Waves can be classified as either mechanical or electromagnetic

Are waves that require a medium for their propagation eg water, waves, sound wave and waves on stretched strings

These are waves which can travel in a vacuum e.g. radio waves, in fared visible light etc.

Wave motion can be classified into two types

Suppose a rape is moved and down in a direction perpendicular to its length, a wave if formed. Particles of the rape oscillate up and down and can be represented by the graph below;- 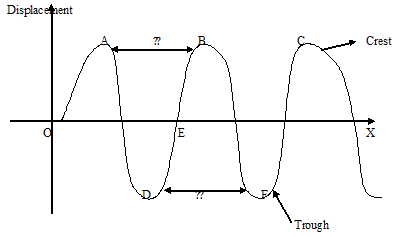 This is the maximum displacement of any particle from its equilibrium position.

This is the distance between two successive creates or troughs along the wave motion.

The unit of frequency is the hertz [Hz]. A hertz is defined as a cycle completed in one second

This is any line taken through an advancing wave in which all particles are in the same phase.

Velocity of a wave

The wave length is the distance a wave travels in the time T for one complete oscillation. Thus the velocity of the wave;-

Radio waves travel at a velocity of 3 x 108ms-1. Calculate the wave length in air of radio waves when transmitted at a frequency of 150MHZ. 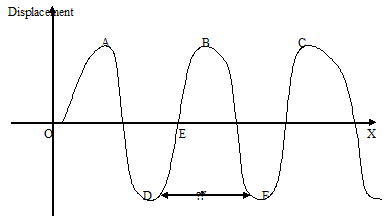 The wave length [λ] is also defined as the distance between two successive particles which are at exactly the same point in their paths and are moving in the same direction. Such pairs of particles are said to be in the same phase.

All the above properties can be investigated using water waves and a ripple tank. A

A ripple tank comprises of a shallow transparent tray of water with a light source above it and a white screen on the floor below;-

The following patterns will be produced with a straight reflector. 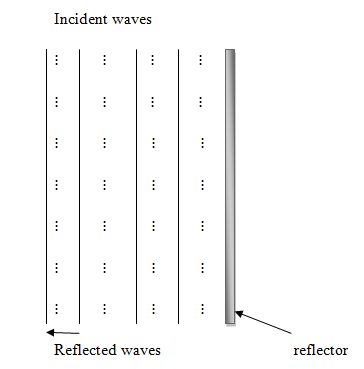 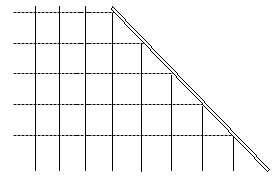 The waves are reflected as plane wave. Both incident and reflected wave fronts have equal spacing i.e. they have the same and wave length. 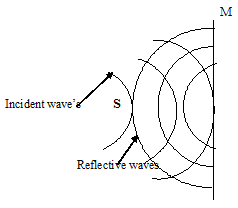 M is a metal that acts as a reflecting surface and 1 is the centre of reflected waves. All arcs have their centers of  curvature at the source S. the reflected waves are a set of circles whose common centre is a point 1 behind M, the same distance from the reflector as the source S in front. 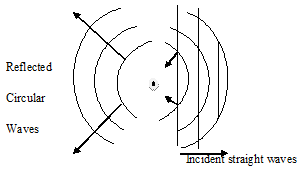 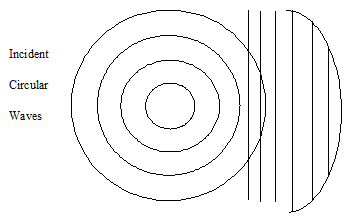 Uses of a stroboscope

A stroboscope helps to make the pattern formed by continuous waves appear stationary, so that it can be seen clearly.

It is a disc about 25cm in diameter with a number of radial slits cut in it. It is pivoted on a handle and rotated by a finger then the wave pattern is viewed through the silts.

When straight waves pass from deep to shallow waters, their wave length becomes shorter. The frequency of the waves remains constant from V= f λ, the velocity of the waves reduces since λ reduces.

A change in wave length and speed brings about a change in direction of travel of the waves when they cross the boundary i.e. refraction occurs. 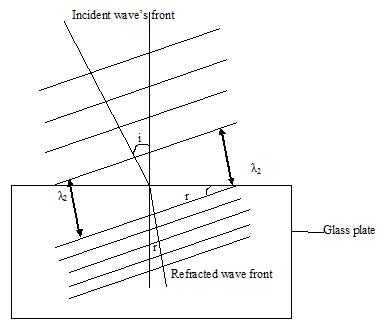 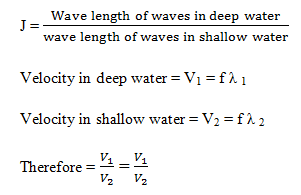 Diffraction at a wide opening 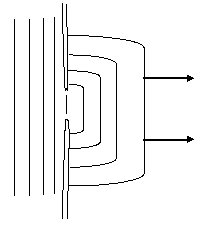 Waves will pass through a straight slight bond at the edges

Diffraction at a narrow opening 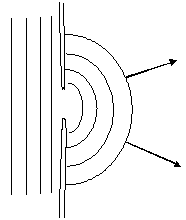 Waves spread out in all direction

If light passes through a very narrow slit, is spread out in a manner similar to wear waves

Inference is the superposition of two or more waves from coherent sources. Conditions necessary for interference to occur

Crest on crest we get lines of increased distance or constructive interference. There are called antinodes lines.

When crests of one wave are superposed on the troughs of the other we get zero resultant disturbance of the water surface.

Destructive interference Nodal lines are lines between the antinodes lines in which waves are exactly out of phase. 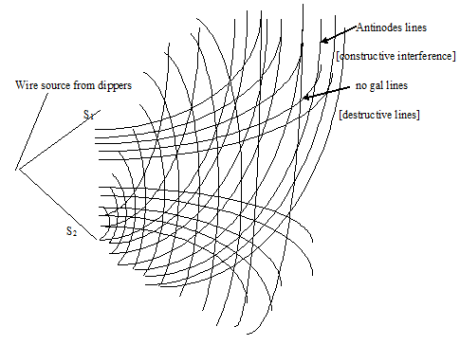 In the corresponding case for light waves antinodes lines are brought fringes and nodal lines are dark fringes.

Evidence for the wave theory of light

Light is a form of wave motion. His motion was discovered by Thomas young. In young’s experiment, the two water wave sources are replaced by point light sources. A series of bright and dark bonds or interference fringes are observed on a screen placed in the path of light.  This is evidence for the wave theory of light.

The figure above shows a modern version of young’s experiment. Two narrow and close slits S1 and S2 are illuminated by light from single fringes can be seen by setting up a translucent screen on the right hand side of the slits. Bright and dark bands will be formed on the screen. The number of fringes seen depends on the width of the slits.

The narrower the slits, the grater the number of fringes.

Electromagnetic waves are an oscillating electric force travelling through space accompanied by a similar oscillating magnetic force in a plane, at right angles to it. A scientist called their rich ttertz showed that electromagnetic waves underwent reflection, refraction, diffraction and interference i.e. they behave like light waves.

The table shows the whole range of electromagnetic waves in order of increasing wave lengths or decreasing frequency. Any particular range of wave lengths is referred to as a bond. The visible spectrum occupies a very small bond in the spectrum.

The s.1 unit of frequency is called the hertz. It’s the frequency of one cycle per second.  The term frequency is not restricted to wave frequencies only but is used also for frequency of a pendulum, an alternating current, a musical note etc.

The whole range of electromagnetic radiation pours onto the earth from the sun and other heavenly bodies in space.

Earthly source of electromagnetic waves are shown to table below;-

Radar equipment is used in ships, aircrafts and air field central towers to find the distance from the transmitter of radio waves to the object. This time taken for waves to travel twice the distance is found. The received pulse is displayed on a CRO.

It requires a material medium for propagation.

Experiment to demonstrate that sound waves require a material medium

A small electric bell is suspended inside a glass jar. The switch of the bell is operated from outside of the jar. The jar is connected to a vacuum pump and evacuated.

When the switch is pressed on, the hammer can be seen striking the going with no sound being heard.

This demonstrates that sound does not pass through a vacuum.

However the sound may not completely die out because the suspending wires transmit sound to the outside of the jar. 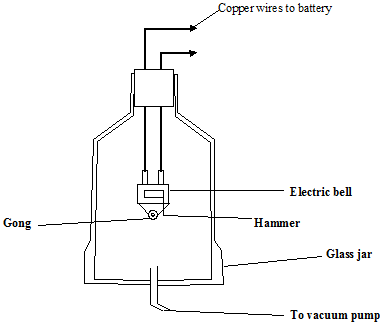 Sound can travel through solids

This shows that sound travels through solids and also demonstrate that travels faster in solids than in air.

Join the bottom of two empty cans with a string speak into one while a friend listens through the other when the string is taut. Sound will be heard.

Sound waves from a tuning fork

Musical sound may be made by turning forks.  A turning fork has two hard steel prongs. When struck on a hard surface, the prongs vibrate and a note of definite pitch is given out. Wave particles of sound waves oscillate in the same direction as the wave.

Wave of this type is called longitudinal waves. Sound waves consist of a series of compressions and rare factions. Air moves forward in a compression and backward in rare factions as the prongs move to the right and left respectively.

Velocity of sound in air

Sound travels at a speed of about 330ms-1 in air. Light travels much faster than sound since its speed is 3 x 108ms-1 in air. The velocity of sound in air can be determined experimentally.

Factors which affects the velocity of sound in air

The velocity of sound increased with increased in temperature

Sound waves can be reflected from the surface in the same manner a slight. The laws of reflection are obeyed by sound waves. To demonstrate reelections of sound, two metal or cardboard tubes are set up in dined. To one another in a horizontal plane and pointing towards a flat surface of a hard material e.g. a drawing board. 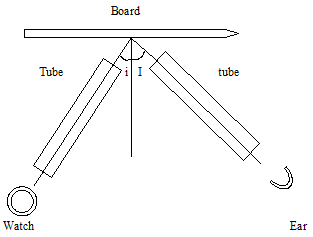 A ticking watch is placed near the end of one tube and the ear is placed at the end of the other tube sound waves pass down the first tube and are reflected from the board. The loudness of the sound heard through the second tube in a maximum when the board is adjusted so that the normal to it lies in the plane of the tube and makes equal angles with their axes.

THIS VIDEO IS ABOUT LONGITUDINAL AND TRANSVERSE WAVES.