This unit is about the hydrometer and how it works.

The hydrometer operates on the principle of flotation. It is used to measure the relative density of liquids. The figure below shows a modern form of hydrometer.

The lower bulb is weighted with mercury or lead shot to keep it upright, and the upper stem graduated to read the relative density of the liquid.

A hydrometer used to test relative density of milk is called a lactometer.

Another enclosed in a glass tube fitted with a rubber bulb is used for measuring causing the air pressure inside to decrease.

The atmospheric pressure on the outside becomes greater than the pressure on the inside and pushes the acid into the glass tube. The density can be read off from the floating hydrometer.

If fully charged the relative density should range from 1.25-1.30. A reading lower than 1.15 indicates that recharging is necessary.

Relative density of a solid

A solid object e.g. a piece of wood  is attached by a loop of thread to a uniform meter rule pivoted at its centre of gravity and is balanced by a known weight W hung on the opposite side.

The sample is the immersed in water in a beaker and the balance restored by moving W closer to the pivot. The distance d2 of W is measured and recorded.(see next diagram).

If W1 = weight of sample in air

W2 = weight of sample in water.

Then taking moments about F, 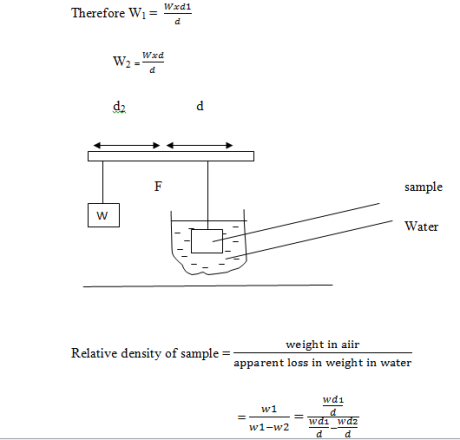 Relative density of a liquid

Two experiments are carried out exactly as described above. These are followed by a third experiment with the sinker immersed in the liquid whose relative density is required. 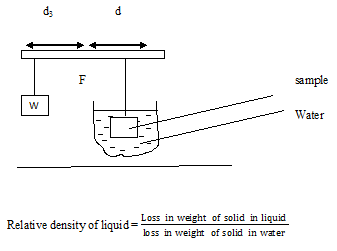 THIS VIDEO SHOWS HOW TO USE THE HYDROMETER