This unit is about Nuclear physics and this encompasses radioactivity, among other things.

Modern physics deals with the nuclear model of an atom which consists of three particles, the neutron, protons and electrons .The collection of protons and Newton’s together is called the nucleus.

An atom is made up of a control part called a nucleus around which a loud of electrons rotates.

Atomic mass number or mass number [A] is the total numbers of protons and neutrons in the nude us of an atom.

This is the number of proton or electrons in an electrically stable atom.

Lithium is a chemical symbol, this implies that the mass number is 7, atomic number is 4.

This is existence of the element with the some atomic number but different mass number.

Isotopes of an element

Are atoms of the some element having the same atomic number but different mass number?

Isotopes that are radioactive in nature are called Radio isotopes.

This is the spontaneous disintegration of un stable nuclei with the emission of Alpha,(a)-particles, Beta(B) – particles and Gamma (v)-10ys.

This is a Helium atom which has lost its 2 arbitral electrons; i.e. they have a net positive change .It has a mass number 4 and an atomic number 2.

Properties of a- particles:

-They are positively charged since they have lost 2 arbitral electrons.

-They have mass number 4 and atomic number 2.

-They are deflected by the electric and magnetic fields in a direction opposite to that of the particles.

-They cause ionization of gasses (most ionizing).

-They have short range of penetration (i.e. they penetrate air but are stopped by thin sheets).

-They cause a heating effect in metals.

-They cause fluorescence in fluorescent materials.

-They are easily absorbed by matter.

-They are emitted with speeds of the order 10ms.

When an alpha particle is emitted by a radioactive source, the mass number reduces by 2.

When an element disintegrates by emission of a – particle, it turns in an element with chemical properties similar to these of an element 2 places earlier in the periodic table.

A radioactive substance under goes decay and admits an alpha particles to substance Y find the mass number and atomic number Y.

These are high energy speed electrons .They have a mass number o and a negative charge.

-They have a mass number of o.

-They are fast moving electrons which are negatively charged.

-They have o much smaller fluorescent effect than a particle.

-They ionize gasses more readily than a particle.

-They penetrate power more easily than a- particles but are absorbed completely by about 1mm of aluminum or a few meters path of air .They don’t have a definite range like a- particles o wing to successive deflection cause by collision with the atom of the absorber.

-They are deflected by electric and magnetic fields much more than x particles because they are lighter.

When an element decays by emitting a B particles it loses an element hence the mass number remains the same but the atomic number increases by one.

When an element  disintegrates  by  emission  of a     -partiality  turns  in  an  element  with  properties  mailer to those of an element one  place later in the periodic table.

Carbon decays by emitting a beta particle.  Find the atomic number and mass number      of the new atom.

They are electromagnetic  radiation  with very  short  were  lengths    emission  of  rays have no  effects  on  the mass of the nucleus.

-They are   electromagnetic waves of very short wave length.

-They are not deflected by magnetic or electric fields.

-They carry no charge.

-They diffracted by light or X rays.

-They cause photoelectric effect i.e. they affect electrons when they fall on certain metals.

-They travel in vacuum with the speed of light.

-They have no effect on the mass number and atomic number of the emitting atom.

THIS VIDEO DEMONSTRATES ALL THE THREE TYPES OF RADIATION

The a-particles are straight and thick.

The B-particles are in an irregular pattern as they suffer frequent repulsions from the electrons nearby and make ionization less frequent.

The v rays produce cloud fount tracks along their own paths as interact with  atoms and give up either part or all the energy.

It’s not dear what causes a particular atom to disintegrate at a particular moment. This activity is purely random. Heating or cobbling has no effect on the rate of decay but experiments shows that every radioactive element has a definite rate of decay expressed by its half life period.

This is the time taken for a radioactive element to decay to half its original mass i.e. The half life of a radioactive nuclei present in the source to disinter grate.

What was the mass of the original sample that remains after?

The rate of disintegrations of a given sample at any time is directly proportional to the number of nuclide N, present at that time.

A graph of N against t is called the decay curve. 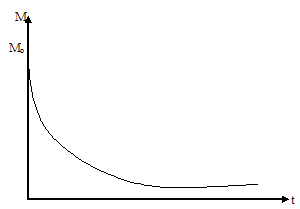 FINDING HALF LIFE FROM A GRAPH

Consider the decay curve of a radioactive source. 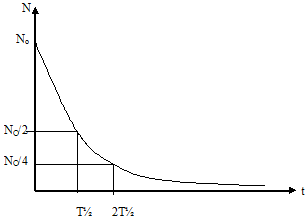 Plants take in CO2 and its 14C decays to 14N by B particle emission.

By measuring the activity of 14C in the remains, the tine when the plant died can be estimated.

Radio isotopes are nuclides which are unstable and undergo radioactive decay emitting  or B particles or  rays during return to a stable form.

The v rays from cobalt have greater energy than is available with standard X ray machines when properly shielded the  rays are employed in the treatment of cancer.

Small qualities of low activity radio isotope are administered by injection into patients and their passage through the body and absorption by diseased tissues studied.

In agriculture, tracers have been used to study how fertilizers, harmony, weed killers and particles perform their functions.

Radio isotopes have been used to induce plant mutations. This has led to improved seed varieties of crop like wheat, peas and beans with high yields and high resistance to crop disease.

Medical instruments and equipments are sterilized by exposure to  rays. Gamma ray as are so being used to sterilize and preserve some food products .the method is safe as no radioactivity in induced in the material irradiated by v rays.

Radiation has also been used to eliminate agricultural pests by sterilizing them and therefore serving the reproduction chains.

By measuring the residual activity of the quality 146C remaining after death of an organism, we can determine how long age the organisms died.

2. For investigation of flow of plaids in chemical plants or in underground water and sewerage pipeline. In the latter cases, a little radioactive solution is added to the liquid being pumped.

Temporary high activity around a leak is detected from the ground above. The rate of flow of liquids can also be measured.

For study of wear in machinery such as of piston rings in motor endings.

Automatic control of thickness paper, plastic or metal sheeting as it gives through the production plant .The thickness is controlled by measuring the transmission of radiation through the sheet.

Atomic energy research centre have developed a mechanism of converting radioactive nuclides into electricity so Nuclear is used as energy.

1. Cobalt and other v rays emitters are used as alternative to X rays set ups which are more elaborate to produce radiographs for examination of welded beans and metal castings.

This is the splitting up of a heavy nucleus into lighter nucleus, of higher binding energy per nucleon.

When U splits, it produces nucleus that are lighter and hence have higher binding energy.

In the above example when the emitted neutron encounter with other Uranium nuclides, they bombard the uranium and more splitting occurs with the ribose of once energy.

The neutrons each produce fission of another atom with the release of more neutrons and when this occurs, the reaction is called a chain reaction.

In a chain reaction, a lot of energy in produced and unless this energy is controlled, the reaction may cause on explosion. Chain reaction is applied in making nuclear bombs.

This is a nuclear reaction where two or more nucleus fuse to form a single heavy nucleus. A lot energy is released when the nucleus of lighter elements fuse together to form a heavy nucleus.

This is the energy gained by an electron of an atom to escape. When an electron escapes from the atom, it becomes an icon.

This is the process by which electrons are produced on a hot metal e.g. a filament made of Tungsten of a bulb.

The electrons remain around the hot metal forming an “electron dud”.