This Unit is about Latent Heat and specific latent heat.

Latent heat and the kinetic theory

Change of state from solid to liquid is called melting or liquefaction while from liquid to solid is called freezing or solidification.

During these changes of state, latent heat [hidden heat] is involved.

Kinetic theory suggest that when a solid changes to a liquid , heat energy must be used to free molecule from the tactic force that hold them together hence heat is used or absorbed.

During freezing heat energy is given out from the lattice bonds. A change from liquid to gases is called vaporization which from gassed to liquid is condensation.

During vaporization heat is used to break the bond between molecules white during condensation heat energy is releases or given out.

An experiment shows that when changes of state occurred the temperature of substances will always remain constant.

This is the quantity of heat required to convert a substance from solid to liquid without a change in temperatures.

This is the quantity of heat required to convert a substance from liquid to gases state without a change in temperature.

These changes of state can be demonstrated by using the cooling process of liquid naphthalene.

This naphthalene is heated to 100oc in a water bath and then left to cool. The temperature is recorded every minute and a cooling curve of temperature against time is then drawn as follows;- 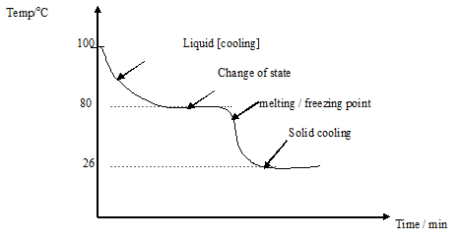 This is the quality of heat required to convert one kilogram of a substance from solid to the liquid state without change of temperature. S.1 unit is Joule per kilogram [Jkg-1].

The quantity [Q]of heat used on given out is the product of the mass and specific latent heat of fusion.

This is the quantity of heat required to convert 1 kg of a substance from a liquid stat to a gases change without change in temperature.

An ice making machines removed from heat from water at a rate of 20 Js-1. How long will it take to convert 0.5 kg of water at 200c to ice at OOc

THIS VIDEO EXPLAINS THE SPECIFIC LATENT HEAT OF FUSION 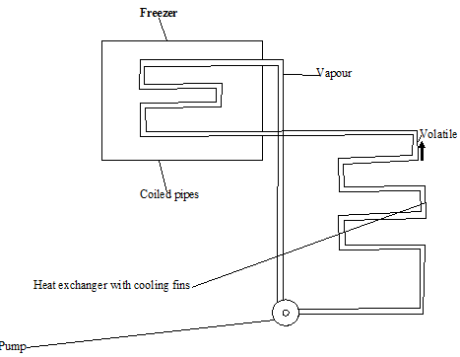 How it works (Principles)

A refrigerator works on the principle that heat is taken into one point and given out at another point by the refrigerating substance as it is pumped around the circuit.

The coiled pipes in the freezer contain a volatile liquid which takes latent heat from its surrounding causing it to cool.

The latent heat taken from the surrounding enable the volatile liquid to change into vapour.

The vapour formed is removed by the pump. This reduced the pressure resulting into the lowering of the boiling point of the volatile liquid.

The pump then forces the vapour into the heat exchanger where it is compressed and liquefies giving out the latent heat of vaporization.

Functions of the main parts of refrigerator

The cooling fins give out latent heat of vaporization to the surrounding air.

The cooling fins are pointed black so that they can quickly give out the latent heat during liquefying because black surface are good emitters of heat radiations.

THE VIDEO BELOW EXPLAINS MORE ABOUT LATENT HEAT