This unit is about Electro-magnetism and where it applies.

This refers to the number of magnetic field lines crossing a given area.

When an electric current flows in a wire a magnetic field is created around the wire .The field pattern created can be plotted by means of a plotting compass or iron fillings and the results shows that the magnetic field lines are concentric circles with the wire at the centre.

The low of currents 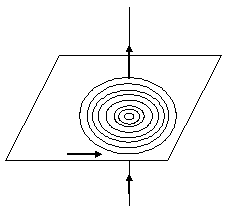 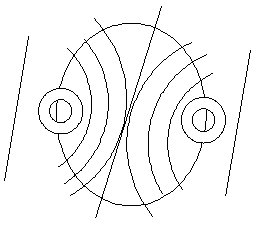 The direction of the magnetic field lines is always the same the centre of the coil.

Magnetic flux due to current in the solenoid

The direction of the magnetic field lines produced when a warrant flows through a solenoid is the same as that of a bar magnet one end acts as a north pole and the other as the South Pole;

When the coil is viewed from one and the current appears to be flowing in the clockwise direction that end of the solenoid is a south pole .If on the other hand the direction is clockwise the directions a north pole.

The magnetic field of a solenoid is the same as that of a bar magnet.

This is the production of electricity from magnetism.

The experiment uses a cylindrical coil of weapon wire would round a paper tube whose ends are connected to a sensitive galvanometer.

When a magnet is plunged into a coil its noted  that the galvanize   pointer gives  deflection showing  that  current  has  been  induced  in  the coil.

Induced current makes and when the magnet is plunged Ba North Pole. Into the coil.

When the magnet is plunged out of the coil, the galvanometer gives another deflection this time in the opposite direction to the one before.

When the magnet is plunged out of the coil, induced current makes end Ba south pole.

This effect of production of current is called electromagnet induction.

The strength of the induced current depends on;-

-The number of turns in the coil.

– The strength of magnet.

-The speed with which the magnet is plunged in the coil.

A similar observation is obtained when two coils are placed side by side with one connected a coil and a switch while the other is connector a sensitive galvanometer. 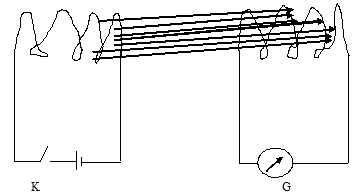 When a witch K is closed, induced current flows in one direction and the galvanometer gives a deflection in the opposite direction. This phenomenon is summarized into two laws called the laws of electromagnetic induction.

This states that whenever there is a change in the magnetic flux linked with a circuit on e.m.f is induced the strength of which is proportional to the rate of change of the flux linked with the circuit.

This state that “The induced current always flows in such a direction as to oppose the change producing it.

An electromagnet is the basis of a soft iron rod with several turns of insulated wire wrapped around it. 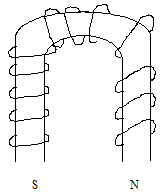 When a current is passed through the wire the soft iron get to magnetize and behaves like a magnet with one end having a north pole and the other a south pole. However when the current is switched off the soft iron loses the magnetism.

This property of soft iron is utilized whenever strong magnetism is required for a short time (temporarily).

On the other hand, when steel is used instead of soft iron a relatively weaker magnet is obtained. But a switching off the steel does not lose all its magnetism.

The strength of electromagnet can be increased by;

A strong electromagnet can be made by using a U-shaped soft iron core. This has an advantage that both poles may be used.

The principal of the electromagnet can be used in making an electric bell. 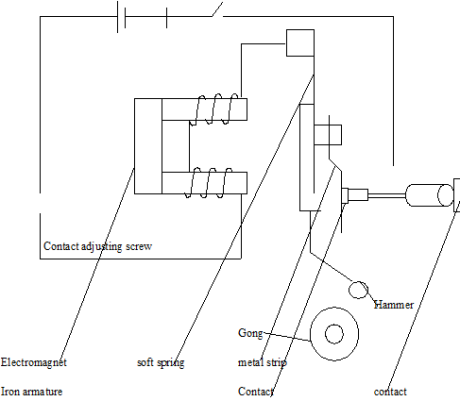 When the switch closed current flows in the coils of the electromagnet which becomes magnetized and attracts the soft iron armature. The hammer hits the gong and the circuit is broken at the armature. The sparingly metal strip is then able to pull the armature back, remarking contact and so completing the circuit again .This cycle is repeated and the bell rings continually.

The a.c generator consists of are rectangular PQRS coil between two poles of strong permanent magnet.

The coil is connected to two slip rings which are in sliding contact with carbon brushes to which a load is connected. 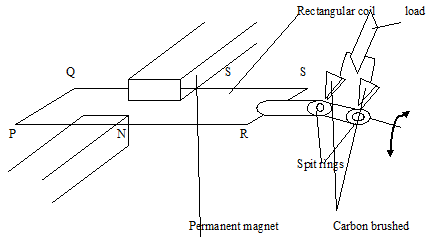 The voltage generated by the generator varies with time from zero to maximum.

The magnitude of the induced e.m.f depends on the following factors;

-Number of turns in the coil.

-Speed of rotation of the coil.

-Area of the coil.

-Winding the coil on a soft iron armature so as to concentrate the magnetic flux.

Power losses in the generator are due to;

-Heat losses, I R due to resistance of the coil windings. This is minimized by using a coil made of low resistance copper wires.

-Eddy current losses (also inform of heat) .This is minimized by using a laminated iron core.

-Work done against friction in the bearings. Minimized by lubrication.

Venation of induced e.m.f with time 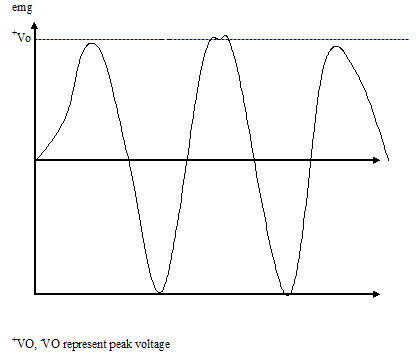 When current is switched on by closing switch K side PS experience a down ward force while CB experiences an upward force. The two forces form a couple which rotates a coil until it is vertical. In this position, the brushes are then in line with the gaps in the split ring commentators, and the current stops.

Inertia causes the coil to overshoot its contact from one brush to another .This reverses the current through the coil and also the directions of the forces on its sides. The coil thus rotates in the some direction in this case anti-clockwise.

If Vis the supply p.d applied to run the motor from the battery .In the armature current, as the motor runs an e.m.f called the back e.m.f Eb, is induced in the motor windings opposite direction to the applied p.d v.

It consists of a rectangular coil is PQRS between the pole of a permanent magnet .The coil connected to a split ring commuter which is in sliding contact with carbon brushes.

The carbons are connected to a load. 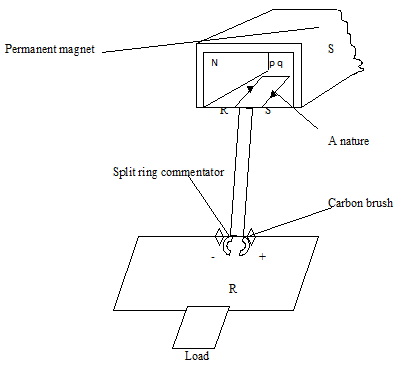 When the coil is the magnetic field, the magnetic flux linked with it changes. An e.m.f is induced in the coil. The brushes are arranged so that when the coil is passing the vertical position, the two halves of the split ring one just on the point of changing contact from one brush to another.

Starting with the coil in the vertical position, the e.m.f generated during the first half rotation rises from zero to a maximum and then falls to zero again.

As for as the external resistance R is concerned, the right hand brush is positive and the left hand brush is negative. When the coil passes the vertical position, the correct in the coil changes as the brushes change contact but the polarities of the brush remain the same.

A graph showing the variation of induced e.m.f against time is as shown below.

It is a device for stepping up or down, on alternating voltage .It works on the principle of mutual induction.

A transformer consists of two coils, the primary coil and the secondary coil would on a soft iron core. The transformer works on the principle of mutual inductance.

If the number of turns in the primary exceeds that in the secondary ie if Ns  Np the transformer is stop down.

Energy losses in a transformer

1 -Heating affect the core due to eddy current. This is minimized by using A laminated core.

3 -loss of energy due to the continually changing direction of the molecular magnetism in the core. (Hysteresis loss).This induced by using a magnetically soft iron core.

4 -Energy loss due to resistance of the wires (coils) in form of heat (1 R).This is minimized by using low resistance copper wires.

Conversation of a millimeter to an ammeter

A millimeter is a device for measuring very small current (of order 10-3 A).It can be converted into an a ammeter cable of measuring large current (up 10A) by connecting a small current called a shunt in parallel to the main resistance of coil .The shunts serves the purpose of directing the most of the current in order to protect the coil.

A millimeter has a coil resistance of 20 and bashful scale deflection for a current of 5mA.Explain how this millimeter can be converted into an ammeter which can measure a current up to 5A.

Rs = Resistance of the shunt, Is = current through the shunt

Thus a resistance of 0.02 should be connected in parallel to the main coil resistance in order to convert this millimeter of f.s.d 5mA to an ammeter measuring up to 5A.

Conversion of a millimeter in to a voltage

A millimeter used to measure up 5mA and having a coil resistance of 20 can also be used as a millimeter measuring up to (0.005×20)=0.1v .It can be converted into a voltmeter measuring p.d up to say 10v by connecting a resister called a multiplier.

The motor effects are where by a wire carrying a current in a magnetic field experiences a force. The direction of the force is determined by Flemings left hand rule (the motor rule).