This unit is about cells in electricity both primary and secondary.

A cell is a device that converts chemical energy into electrical energy. A group of cells is called a battery.

There are two types of cells;

It is one in which current is produced as a result of a non reversible chemical change taking place within its components. A primary cell cannot be recharged after its voltage has dropped but is thrown away.

Examples of primary cells are;

It’s one that can be recharged when its voltage has dropped by passing a current through it from another source of current.

A simple cell consists of copper and zinc plates joined with a conductor and placed in an electrolyte of dilute sulphuric acid. 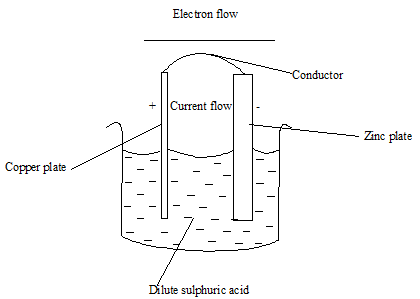 When the plates are joined by the conductor as shown above the zinc plate begins to dissolve in the acid and bubbles of hydrogen are formed on the copper plate.

Current of electrons flows through the wire from zinc to the copper plate.

When pure acid is added to water, the sulphate [SO42-] group of atoms separates from the two hydrogen atoms taking two electrons with them. One from each hydrogen atom. The hydrogen atoms therefore a net positive charge.

Zinc toms go into solution to form zinc ions leaving two electrons for each atom on the plate.

The conventional direction of an electric current is from the positive terminal towards the negative terminal and these represented by an arrow in current diagram.

The electromotive force of a cell is the potential difference across its terminal on an open circuit. 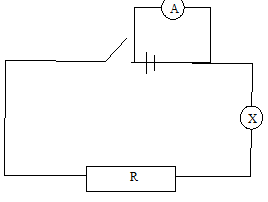 Defects/ disadvantages of a simple cell

This is the formation of layer of hydrogen bubbles on the copper plate. This layers weakens the current hence current flow reduces i.e. the gas partially insulates the plate and hence increase internal resistance of the cell.

The hydrogen layer sets up a reverse voltage in the cell in opposition to that did to the copper and zinc.

This is coming off of hydrogen bubbles from the zinc plate. It is caused by the presence of impurities in the plate

The zinc plate should be cleaned in sulphuric acid then rubbed with a small globule of mercury over the surface with a piece of cotton. The amalgam all over the surface and the impurities are covered and can no longer come into contact with the acid. 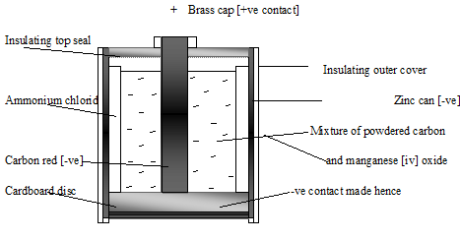 In this cell both terminals are made of lead. Red lead oxide [Pb3 O4] as the positive plate and lead [11] oxide [PbO] as the negative plates. If both plates have large surface area and are close together the internal resistance will be low and hence a large current will be produced. The electrolyte used is dilute H2SO4 [aq]. Car battery may consist of six lead – acid cells.

The positive plate is made of nickel hydroxide. The negative plate is made of cadinium or iron. Caustic potash [potassium hydroxide] is the electrolyte. They are more expensive than lead acid cells and have a much longer life span. They can be left in a discharged condition for a long time without harm.

-they are not affected by large current.