This unit is about Electric power as understood in Electricity.

Filament lamps in use today are gas filled. Normally, argon is the gas used.

This reduces evaporation of the tungsten which would otherwise condense on the bulb and blacken it.

The filament is a small coiled coil of tungsten wire which becomes white hot when current flows through it. Tungsten has a high melting point of 3400° C.

They consist of gas at low pressure in a tube fitted with metal electrodes at each end. The gas glows with a particular colour when a high voltage is applied to the electrodes. The electric field set up inside the tube causes ions present in the gas to move with high speed. The ions collide with gas molecules and light is emitted whose colour depends on the nature of gas in the tube.

Fluorescence is the phenomenon in which certain minerals glow brilliantly with various colours when ultraviolet light falls on them.

When the lamp is switched on, the mercury vapour emits ultraviolet radiation which makes the powder on the inside of the tube florescence hence light is emitted. Different powders give different colours.

They are long lasting and use less energy compared with filament lamps. e.g. 20W compact fluorescent is equivalent to a 100W filament lamp.

(i)They are more efficient than filament lamps.(Filament lamps transfer only 10% of electrical energy supplied to light.)

(ii)They are cheaper to run.

(i) They are expensive.

Energy in an electric circuit

When an electric current passes through a wire it gets heated up because the wire
contains free electrons which begin to move when a p.d is applied across its ends. As
they (electrons) move they collide with each other and with atoms vibrating about their mean positions. When the amplitude of vibration of the atoms increases the temperature of the metal increases hence heat is produced.

Work done by an electric current

Electric Power is the rate at which electric energy is transferred into other forms of energy.

Power is the ratio of work done to the time taken to do the work. 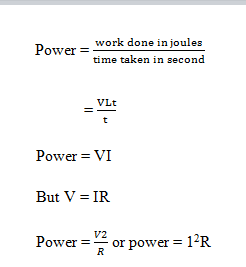 One watt is the rate of working of one joule per second.

An electric appliance may be marked 240V, 60W. This means that when the appliance is connected to a 240V a.c supply 60 joules are dissipated (converted into other forms of
energy) every second.

The Kilowatt hour is the commercial unit of electrical energy.

The Kilowatt hour is the electrical energy supplied by a rate of working of 1w for 1 hour.

How electricity bills are calculated

Electricity comes to our homes by a cable containing two wires, the live (L) and the neutral (N). The neutral is earthed at the local substation so there is no p.d between it and the earth.

The supply is alternating current (a.c). The service cable enters a sealed box where the
live is joined to the electricity board’s fuse. The supply is controlled by the main switch which has fuses for different circuits.

Every circuit is connected in parallel with the supply i.e across the live and neutral and receives the full mains p.d of 240 V.

These are always in the live wire.

FUSES
A fuse is a device containing a short length of thin wire which melts and breaks the circuit when the current exceeds a certain value.

A fuse protects the appliance if there is a fault.

Symbol for a fuse:

Earthing
The ring main circuit has a third wire that goes to the top sockets on all power points and is earthed by being connected either to a metal water pipe in the house or to an earth connection on the supply cable.

Earthing is a safety precaution to prevent electric shock should an appliance develop a fault. The earth pin on a three pin plug is connected to the metal case of the appliance which is thus joined to the earth by a path of almost zero resistance. It develops a fault and a live wire touches the case, large current flows to earth and flows the fuse.

A circuit breaker is a device that contains an electromagnet which when current exceeds the rated value, becomes strong enough to separate a pair of contacts and breaks the circuit. They are used in consumer units instead of fuses. They operate much faster than fuses and are reset by pressing a button.

Direct current is flow of current in one direction only. (d.c)

Alternating current is current that flows in both directions at high frequency (a.c). Direct current may be steady or varying.

Graphs to show variation of current with time for d.c 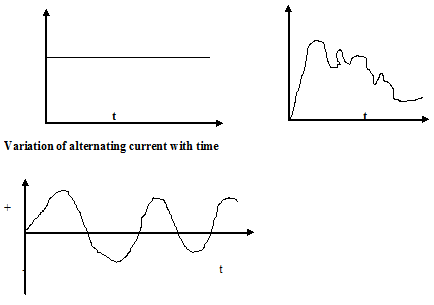