This Unit is about the Cathode Ray Oscilloscope and how it operates.

Cathode rays are highly energetic electrons emitted by metal surfaces when heated to very high temperatures. They more from the cathode to the anode. 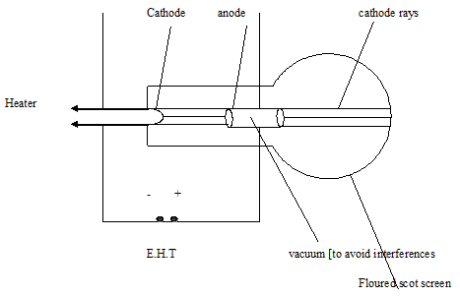 The tube is evacuated to avoid electrons interacting with any particle before they reach the screen .When the cathode rays hit the fluorescent screen, the screen glows. This shows that electrons posses momentum and therefore have mass.

Iii) They are deflected by both magnetic and electric fields (this proves they carry change).

Verification that electrons travel in a straight line 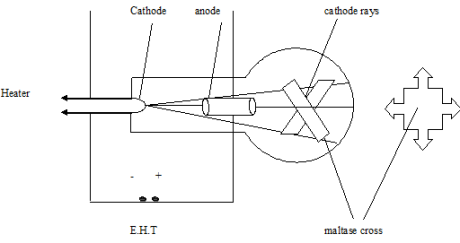 If an opaque object (Maltese cross) is placed in the path of the cathode rays, a sharp shadow of the Maltese cross is cost on the screen.

This is an instrument  used  for  studying  the  current and voltage wave  forms  in  various  circuits .the  the  chief  feature  of the  oscilloscope is the vacuum  containing three  main parts.

Uses of the parts

This consists of a heater    G, a cathode a control Grid and the cylindrical [Ring-like] anodes.

The glass tube is evacuated to prevent scattering of the electron beam when electrons collide with air molecules.

It consists of hollow metal cylinder with small hole at the end. it is held  at variable  negative  potential  to the cathode  by means of the potential  divider   R1 .The  Grid  serves two  purposes  namely

-It determines   the brightness of the spot on the screen.

-It refocuses the electron beam so that the beam emerges from the hole as a narrow beam.

Anodes A and A2; – These are held at a positive potential relative to the cathode. The  anode accelerates  the electron  beam  along  the tube  and  also focuses  the electron beam into fine  beam  by means  of the  potential divider  R2.

X-plates, X and X these are vertical plates but they deflect the beam horizontally when a p.d is applied across them.

This is coated with fluorescent material such as zinc supplied. It enters light when struck by electron beam.

Enables light to be seen only on the screen as the graphite coating absorbs the electron’s kinetic energy.

This is a smoothened rectified a.c fed through a chain of resisters.

The brightness of the spot depends on the rate at which the electron strikes the screen. The number of electron will increase if there is increase in the heater current and the grid is less negative.

Operation of the CRO

Suppose the x-plates where shunted and a.d.c. voltage was applied to the y-plates. The electron spot would be deflected vertically.

If the x-plates are shunted and an a.c voltage is applied to y – plates, the electron beam is drawn into a vertical line.

When no signal is applied to the y – plates, the voltage v, causes the electron beam to sweep horizontally to and from on the screen as shown.

Uses of a CRO

An unknown voltage is applied across the y-plates. If the time base is switched off, a vertically line is obtained on the screen.

Comparison of CRO with a moving coil voltmeter

When some metals held at a negative potential are illuminated by electromagnetic radiations electrons are emitted. This called photoelectric emission. 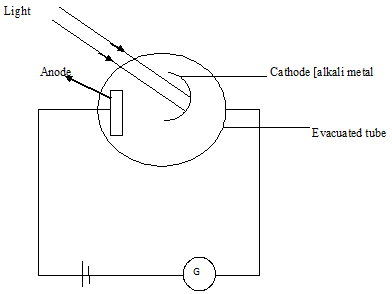 When light falls on a metal cathode, a galvanometer shows a deflection, indicating flow of current. However when the plates are covered, more current flows. Energy of the incident light is absorbed by the electrons and instantly an electron jumps out. Such effected electrons are called photoelectrons.