This unit is about the Achimede's principle and how it works most.

When a body is wholly or partially immersed in a fluid, it experiences an up trust equal to the weight of the fluid displaced.

Place a displacement can on a table fill it with water to the brim. Place a beaker under the spout when no water drops from the can. Tie a solid body such as a stone to a string and suspend it on a spring balance.

Determine the weight of the body in air, Wa.

Carefully lower it in the can and determine the weight when completely immersed, Ww. the displaced water will pour in the beaker. Pour the water in a measuring cylinder and determine its volume.

If up trust = weight of displaced water then Archimedes’s principle is verified. 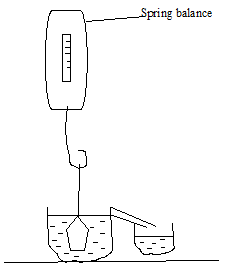 Relative density of a liquid by using Archimedes’ principle

Wa, – weight of solid in spirit or other liquid used

Ww – weight of solid in water

The total weight of the fabric and hydrogen is much less than the weight of air it displaces.

Bodies which are much less dense than water, those denser. A piece of solid steel sinks but a ship made of steel floats because a ship is hollow and contains air ,its average density is less than that of water.

The buoyancy of a submarine depends on the quantity of water in its tanks. When it’s required to dive water is admitted to special tanks. When the water is ejected from the tanks the submarine rises to the surface and floats.

A piece of wood or other material sinks until its weight is equal to the weight of water displaced.

In this state the body then floats.

A balloon containing hydrogen gas may raise in air at a steady rate but it can be made to float if the gas it contains is adjusted so that the average density of the balloon is equal to the density of the surrounding air.

A floating body displaces its own weight of the fluid in which it floats. This is Archimedes’s principle applied to a special case.

EXPERIMENT TO VERIFY LAW OF FLOTATION

The test tube together with lead shot in it is then suspended on the spring balance and its weight, Wa determined.

It’s noted that weight of test tube and contents in air = weight of displaced water.

Hence the law of flotation is verified.

THIS VIDEO EXPLAINS MORE ABOUT THE ARCHIMEDES’ PRINCIPLE