This unit is about Vapor and it's pressure.

They are due to evaporation of liquids. Liquid molecules that have high kinetic energy escape from the attraction of their neighborhood and eventually live the liquid surface. The rate of evaporation can be increased by increased temperature.

If a liquid is placed in a bottle which is corked the space above the liquid begins to fill with vapour due to evaporation. These molecules move randomly in the space and hit the sides of the bottle causing pressure which is called vapour pressure.

The space above the liquid is said to be saturated with vapour and this exerts pressure called the saturated vapour pressure [s.v.p]

Before this dynamic equilibrium, vapour is said to be unsaturated for a given temperature, the saturated vapour pressure of a liquid is always the same.

Effects of temperature on s.v.p

Investigations to show that the s.v.p of water increases with increases in pressure. This can be represented of a graph as follows;- 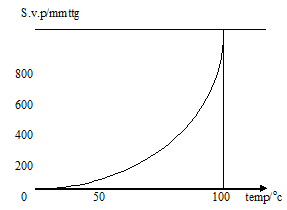 At low temperatures, s.v.p is low but increases highly as temperature rises to 100oc.

Saturated vapour pressure [s.v.p] at any given temperature does not depend on volume of the vapour provided there is same free liquid present to ensure saturated conditions

The boiling point the substance is defined as temperature at which its s.v.p becomes equal o the external atmosphere.

Since boiling point depends on S.V.P and external atmospheric pressure any variation in the pressure of atoms will cause a change in the boiling point of the substance i.e. at lower atmosphere[ e.g. at great heights].

Liquids tend to boil at lower temperature hence the boiling point is low. Food cooked at such heights will take larger to get ready since boiling point of the liquid is reduced.