This unit is about temperature and also talks about the gas laws.

Temperature describes the extent to which heat is concentrated in an object.  It is defined as the measure of the degree of coldness or hotness of an object. 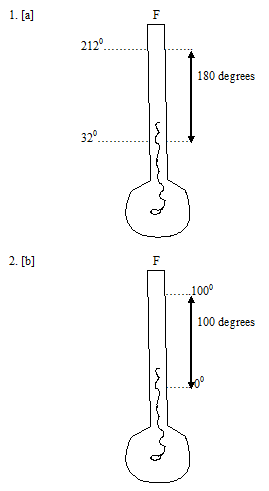 The temperature using this thermometer depends on the rise or fall of the liquid length inside a thermometer when temp rises or falls. These are called liquid – in – glass thermometers.

This scale uses two fixed points. These are;-

This is the temp of pure melting ice and is taken to be O0c. Impurities in ice would lower its melting point.

The ufp is the temperature of the stream above water boiling at normal atmospheric pressure of 760 mm ttg and is taken to be 100oc. 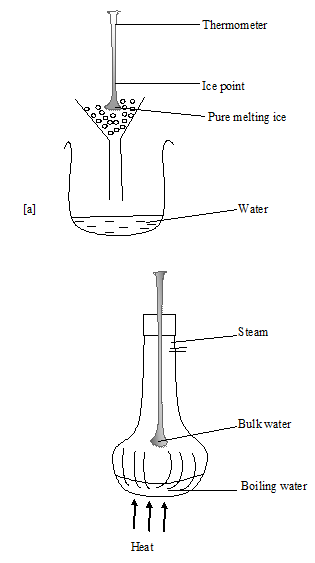 The level of mercury in the thermometer when placed in pure melting ice and in stream above boiling water are marked by using a scratches. The level in [a] shows the lower fixed point while that in [b] is the upper fixed point.

A student found out that the distance between the lower and the upper fixed points on her designer thermometer is 15cm. If she divides this interval into 100 equal parts what is the temp in oc if the reading of the mercury is 5cm above the lower fixed point when the thermometer is placed on another body. 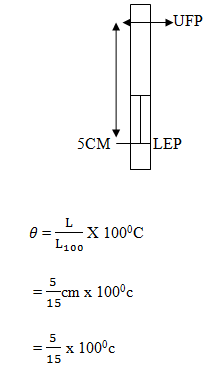 This is a liquid metal which expands significantly when exposed to heat. If the bore of the tube in which this mercury is kept is constant then the volume that expands is proportional to the length.

A very sensitive thermometer must therefore have a very small or narrow bore of the tube. Mercury is opaque hence it can be easily seen. It has a high boiling point of 6300c. However, mercury freezes at a temperature of 410c thus providing a good range 4 temp measurement.

Mercury vapour is, however, poisonous and mercury frizzes at slightly a high temperature of – 41oc. Hence such a thermometer is better for measuring temperatures of better bodies.

Alcohol has one advantage over mercury it has a very low freezing point of – 1150c however, alcohol boils at only 780c. Hence alcohol – in – glass thermometers are better for taking measurements in cooler regions.

Alcohol is not easily seen because it’s clear but can be coloured to make it visible. Alcohol wets the glass tube thus the readings taken may not be accurate.

But the commonly used value of absolute zero ok is -273oC ice point of water is therefore;-

The gas laws are concerned with the behaviors of gases in relation to 3 varying quantities;-

Temperature [T] for a fixed mass of gas to study how the changes in one quality affect the other. The 3rd quantity must be kept constant.

Boyle investigated the relationship between variations of pressure between a gas with its volume when the temperature of the system is kept constant.

Boyle’s low, therefore, states that the volume of a fixed mass of gas is inversely proportional to the pressure provided the temperature remains constant. 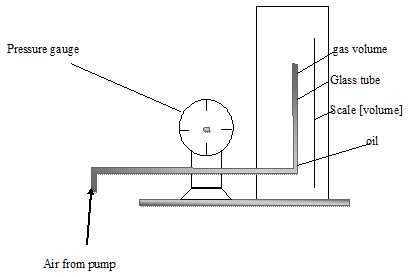 Pressure from the pump is measured from the pressure gauge while the corresponding variation of volume is read from the volume scale. A graph of pressure plotted against volume is a smooth curve as shown below.

A graph of pressure against volume 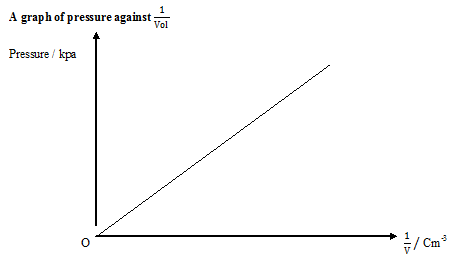 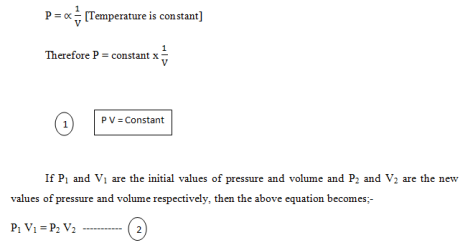 Although air was used to carry this investigation Boyle’s law is true for all gases over a wide range of pressures. 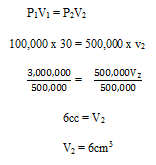 The following apparatus is used to investigate Charles’ law for gases 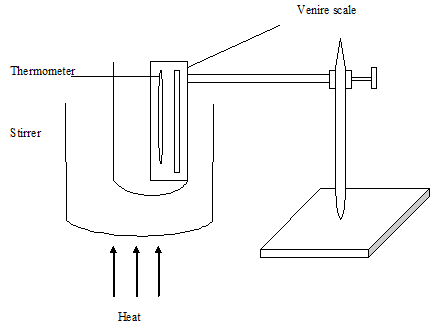 During the investigation, the atmospheric pressure is kept constant. This is done by adjusting the mercury thread level such that every time the reading is taken the level is at the same position.

A graph of volume against absolute temperature is then plotted and a straight line that cuts the volume axis at an intercept is obtained.

When this graph is extrapolated [extended] backward, it meets the obsolete temperature axis at absolute zero, [ok] i.e. at –273oc. 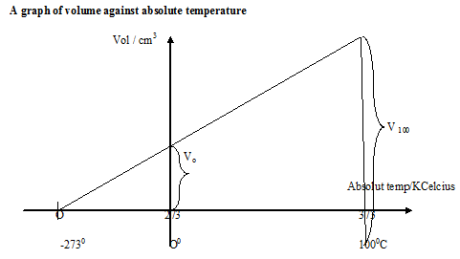 Using the kinetic theory of gases, the rise in temperature causes the particles of the gas to travel faster and hence exert a larger force on the wall of the container.

If the pressure remains constant, then the volume must increase. For Boylle’s law a reduction volume without change in temp of system that the particles become closer together to collide with the wall of the container more frequently leading to an increase in pressure 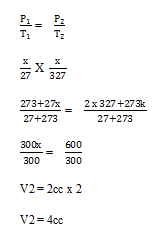 The following apparatus may be used to investigate the pressure law. 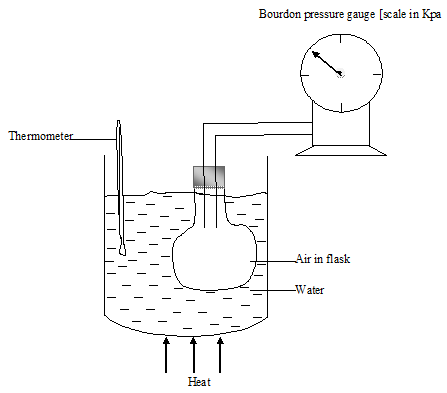 During the experiment the volume of air in the flask is kept constant as the temp of water is changed by heating, the corresponding change in pressure can be monitored and recorded from the pressure gauge.

A graph of pressure against absolute is then platted and a straight line that cuts his pressure axis at an intercept is obtained. If this line is further extrapolated it will cut the absolute temperature axis at absolute zero [10k

A graph of pressure against absolute temperature 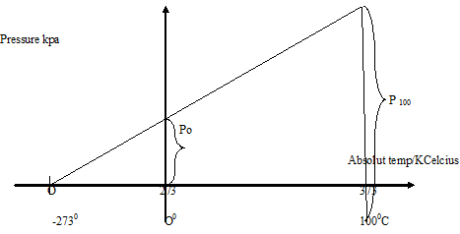 The straight line shows that pressure varies/ directly proportional to the absolute temperature provided the volume is constant. 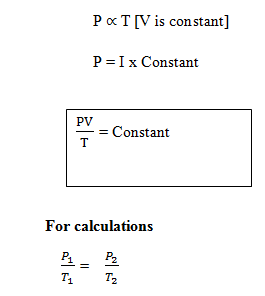 The gas equation [equation of state]

The gas equation represents the summary of three equations of Boyle’s Charles and pressure laws i.e; 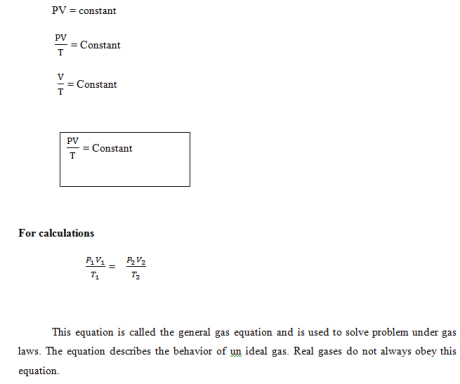 The standard temperature and pressure [s.t.p]

The s.t.p represents the volume a gas will occupy at a temperature of Ooc and 760mmtty thus 760mmtty and O0 are called s.t.p

Cycle/ bicycle pump contain 50cm3 of air at 170c and pressure of 1.0 atmosphere. Find the pressure when the air is compressed to 10cm3 and its temperature rises to 270c 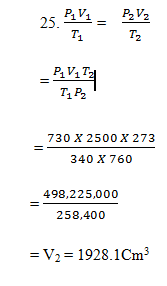