This unit is about mirror dynamics and refraction.

The formulae states that

For concave mirror, F is in front of the mirror and hence F is real and positive, the object is real image hence V is positive. If image is behind the mirror, it is virtual hence V is negative.

This method is less accurate 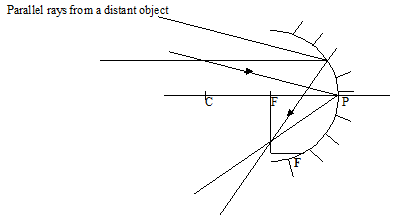 The object at a distance [e.g. a free or a plant outside a lab] can be used to estimate the focal length of a concave mirror. Light rays from this object are parallel and from an inverted, diminished and real image of the object at the principle focus.

The image can be seen of a movable screen. The distance between the screen and mirror is measured and is approximately equal to the focal length of the mirror

Using a pin placed at c 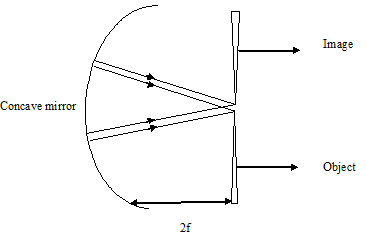 The pin is fixed in cork such that its tip is at the same horizontal level as the centre of the mirror. Position is formed by moving the pin to or from the mirror for which these number parallax between the pin and its real image formed the distance between the pin, its image , the mirror is equal to r where; r = 2f hence f = ½r 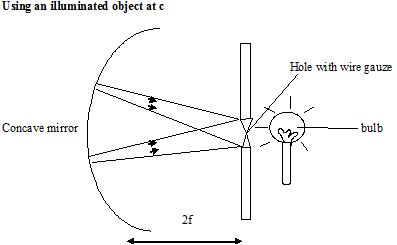 A concave mirror is set up in a mirror holder. In front of the object the object used is a hole and cross wire in a white screen illuminated by a light bulb. Light from the object [cross wire] is passed onto the covered mirror and is reflected back onto the screen. This may give a faint [blurred] image of the crosswire on the screen. The position of the mirror is adjusted [sometimes the position of screen may be adjusted] until a sharp clear image of the object is formed on the screen alongside the object. The distance between the mirror and screen is equal to radius of curvature r or 2f

The following are some effects that are attributed to refraction 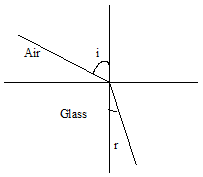 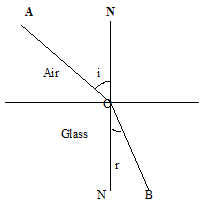 AO is called the incident ray

OB is the refracted ray

NN is the normal

The laws of refraction;

States that the incident ray and the refracted ray are on opposite sides of the normal at the point of incidence and all the three are in the same plane.

An experiment to investigated smell’s law 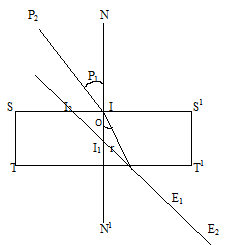 -Looking through the blocks from the other side fix the sighting pins E1 and E2 such that they appear to be in line with the image I1 and I2 of pins p1 and p2.

-Make the positions of all the pins then remove the glass block and join the pins E1 and E2 to the line TT1. Also join point O to where line E1 and E2 meet with.

-Measure the angles i and r and record

The ratio  sin i/sin r should be practically constant

THE VIDEO BELOW EXPLAINS MORE ABOUT REFRACTION

If a ray posses from air to another medium then we talk of refractive index of the second medium. However, strictly speaking ‘absoluter refractive index’ is when the first medium is a vacuum.

If a ray posses from air to water then the refractive index of water is written as;-

Appearance of a straight rod/rule in water 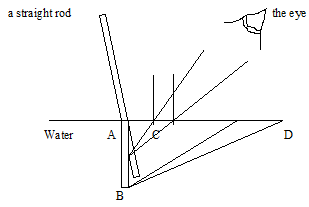 Rays of straight light from B on a straight line pass through water to air. They are bent away from the normal at the boundary D. as the rays enter the eye they appear to be coming from point C which is above point B under the surface of water. Thus the rod appear bent at a due to this change in direction of light [refraction]. 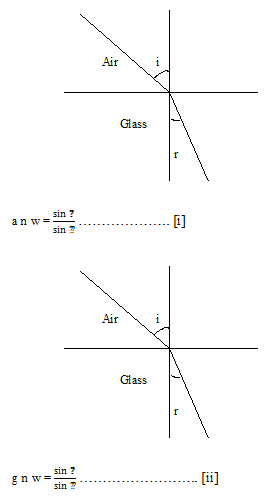 Water in a pond appears shallower than it is. When a glass blocks is put on a page, the letter appear to be displaced upwards, these observation are  a result of reflection of light as it moves from one medium to another. This can be shown as follows;-

When a ray passes from one medium to another which is more optically dense, there will always be reflection and refraction for all angles.

However, when light passes in small angles of incidence from a more optically dense to a less optically dense medium. These is a strong refracted ray and a weak ray that is reflected back into the denser medium and If the angles of incidence in the denser medium is increased. The angle of refraction also increased in the less dense medium. This continuous until an angle called the critical angles is reached.

Critical angle [c] is the angle of incidence in the cleanser medium of which the angle of reflection in the less dense medium is 900 . 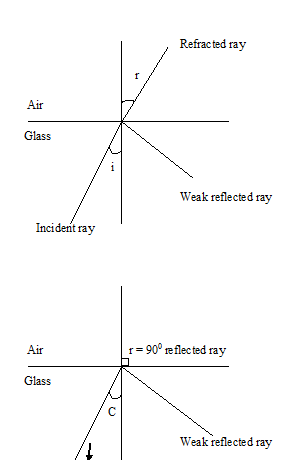 When the angle of incidence in the denser medium exceeds the critical angles the refracted ray disappears and all the incident light is reflected back inside the denser medium. This is called total internal refraction 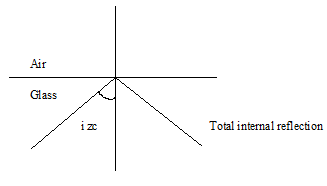 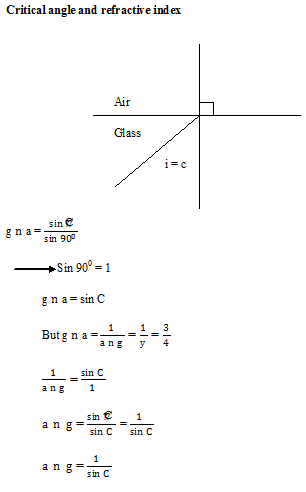 Total internal reflection is used in the following ways;- 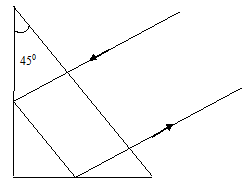 The critical angle for glass is 420 hence a ray that is incident on the interference at 450 is totally internally refracted.

Such prisms are used to replace mirrors in binoculars, microscopes, telescopes or periscopes. 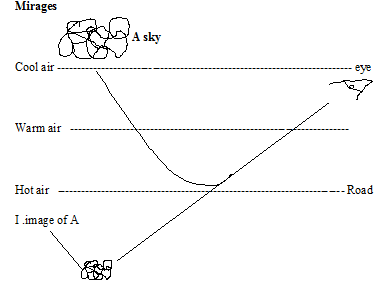 A mirage is often seen as a pool of water on the road some distance a head during a hot day. As the ray moves through cool, wrong and hot air towards the earth. It is continuously refracted away from the normal until such a point when it totally reflected at a point close to the surface of the sun. The image of the sky then appears like a pool of water on the road surface to observe as shown in the diagram above. 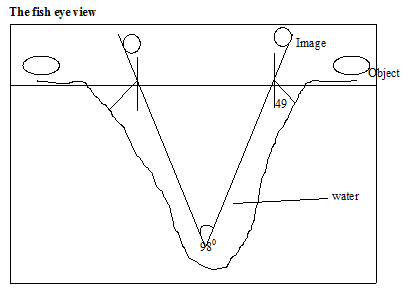 Due to total internal reflection that happens at the surface of water, a fish can fee object above and below the water surface.

The angle of clarity is 980 i.e. twice the critical angle. The fish can see all objects with in a cone of angle of 980 clearly if the water is clean and calm.

Optical fibers’ consist of plastic or glass fibers’, light or laser beam that is shown into and optical fiber. An optical fiber is bounces from one ego to another by total internal reflection. This transports the beam over large distances with very little loss in intensity.

Optical fibers’ allow the beam to be carried along bends. Doctors use the fibers’ in order to see inside the human body that is otherwise inaccessible to direct light. The instrument is called an endoscope.

Total internal reflection of radio waves by the ionosphere 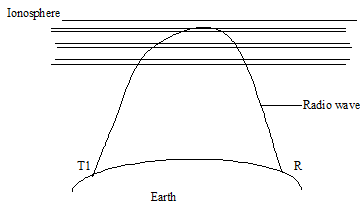 Both light waves and radio waves are electromagnetic that contain electric and magnetic fields. Radio waves are reflected just like light rays. Radio waves from station T on the earth surface are beamed towards the ionosphere i.e. the region of ionized gases found at very large attitudes. As the practical density of the ionosphere decreases the waves are gradually refracted away from the normal until such a height when the waves are totally internally refracted. In this way the radio Wace can be received at location R on the other side of the earth.

Refraction of monochromatic light by a glass prism 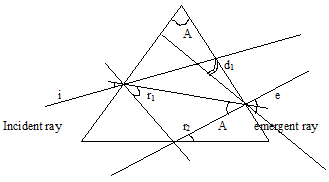 A is angle of prism

i is angle of incidence

r1 and r2 are angles of refractions

d is the angle of deviation

NB: The refracted ray always directed the base of the prism. 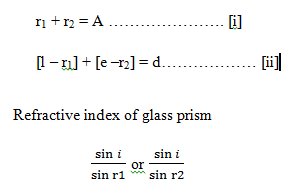