This unit is the introduction of light and has sub topics like rays and beams, shadows and the eclipse.

Light is a form of energy.  Light consists of streams of tiny wave like packets of energy called photons. Which travel at a speed of 3 x 108 meters per second?

Objects that provide their own light include those above, are called luminous objects.

We only see light enters our eyes. Most objects do not produce light. They are called non luminous objects. Such objects can only be seen if they reflect that falls on their own eyes. These include; – the moon, pen, people and objects that we see around us.

An experiment to investigate how light travels

A string or thread

When the middle card is in place light can be seen all the holes when distanced.

THIS VIDEO GIVES A BRIEF INTRODUCTION OF LIGHT

It refers to a narrow stream of light energy that is coming through a small hole in the screen. A ray is the path direction a path of light takes. It represented by a line with an arrow.

This is a stream of light energy and is represented by a number of rays. A beam can be parallel, divergent or convergent. 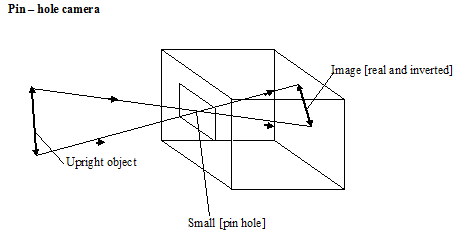 The pin-hole camera consists of a blackened box with a small hole at 1 one and a screen of trashing paper/frost glass at the other end. An image is seen on the screen and it is upside down. This is due to light passing from the object through the pin to the screen.

A blurred image [unclear image] when the hole is large. This is so because of multiple production of images from these small holes that are close together causing over lapping images.

Those for a bigger image the distance of the object from the pinhole must be small compared to the distance between the pin hole and screen.

A VIDEO ABOUT RAYS AND BEAMS

These are formed when the path of light is blocked by an obstacle. The edges of shadows are usually sharp indicating that light travels in straight lines.

There are two types of shadows;-

Umbra is total darkness and penumbra is partial darkness.

Shadow from a point source 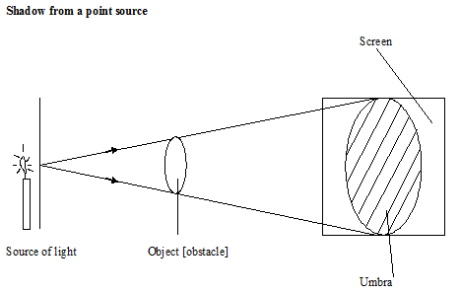 Shadow from an extended source 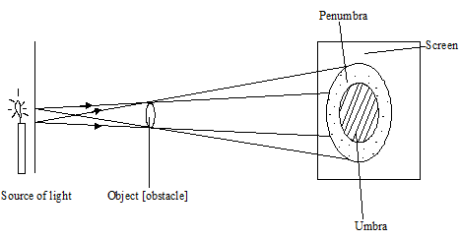 An extended hole /source give rise to both partial complete shadows.

THIS VIDEO IS ABOUT SHADOWS AS IN PHYSICS

An ellipse occurs when the path of light from the sun is blocked by a planet.

This is an eclipse of the son. It occurs when the moon passes between the earth and sun and all three are in the straight line.

How umbra and penumbra are formed on the earth. 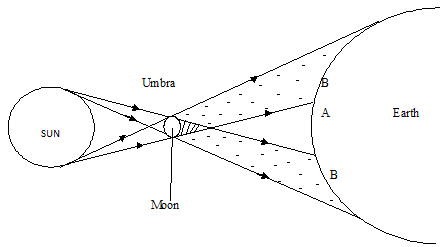 A – Sun appears as a ring of light

This eclipse occurs when the earth passes between the moon and the sun hence the eclipse is experienced by the moon. 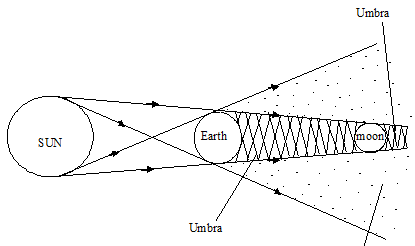 THIS VIDEO SHOWS THE DIFFERENCE BETWEEN THE LUNAR AND SOLAR ECLIPSE.