This unit is about lenses as understood in Physics. It has all the equipment's that use lenses including the eye.

A lens is a transparent device that is shared so that it converges or divergs light that passes through it. Different shaped lenses refract light in different ways. Lenses are commonly used as magnifying glasses, in microscopes, telescopes, slides, movie projectors or spectacles to correct eye defect.

These are normally thin in the middle and wider at the ends. When in use they produce a diminished, upright and virtual images. 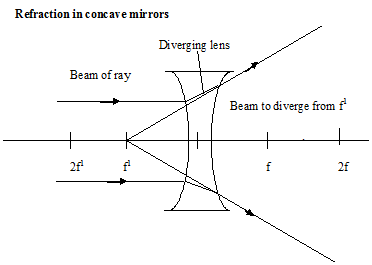 Parallel beam is converging to F after refraction.

This is the line that joins the centers of curvature or the surface of lens.

This is the centre of the lens of the rays that pass through the optical centre and not displaced during refraction.

A convex lens can be used to produce both real and virtual images depending on the position of the object in front of the lens.

Images formed by a diverging lens

For all positions of the object to the images formed are virtual, upright, and small than the object [diminished] and are usually situated between the object and the lens. 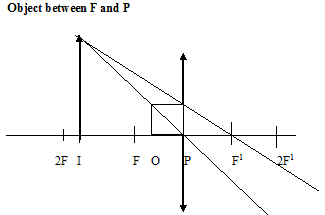 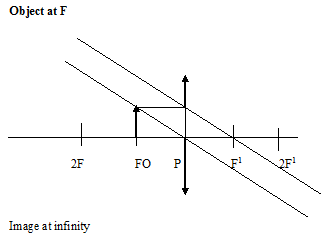 Object between F and 2f 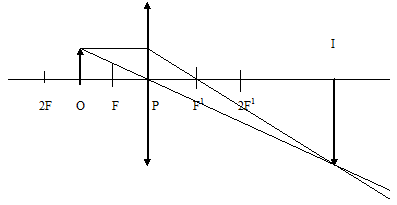 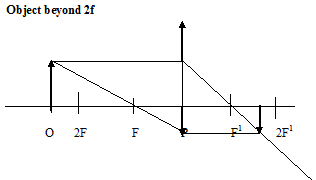 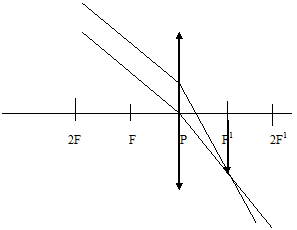 A ray diagram for a concave lens

Between F and P

Where f is the focal length

U is the object distance from pole of the lens

V is the image distance from pole of the lens.

An experiment to measure the focal length of a converging lens 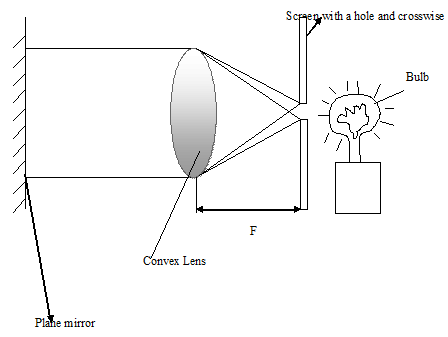 A lens is set up in a holder in front of a plane mirror. The object used is a hole and cross wire in a white screen illuminated by a bulb. This sets up light that is reflected back by the mirror.

The position of the lens or screen is adjusted until a sharp image of the object is formed on the screen alongside the object. 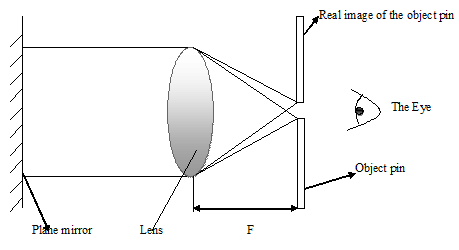 The screen is replaced by a pin as an object. The pin is fixed in a cork such that its tip is at the same horizontal level as the lens.

Applications of the lens 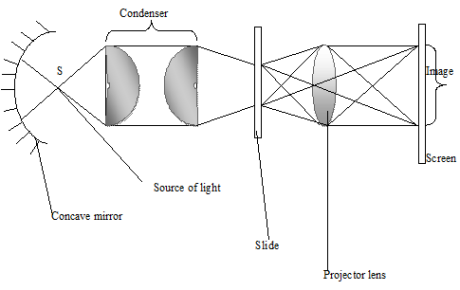 A carbon electric are [or a quartz iodine lamp] is used to give a small but high intensity source of light. This is situated at the centre of curvature of a small concave mirror which reflects back all the light that would otherwise have been wasted.

A condenser consisting of two Plano – convex lens collects light which spreads out and converges it through the slide onto the projection lens to obtain a brilliant magnified picture onto the screen. The projection lens is mounted in a sliding tube so that it may be moved to and from so as to focus a sharp image on the screen. 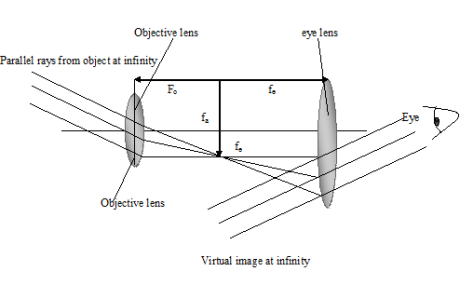 This position coincides with the focal plane of the eye lens hence the image eye acts as an object for the eye lens giving a final virtual and greatly magnified image at infinity.

Power for telescope is given by;- 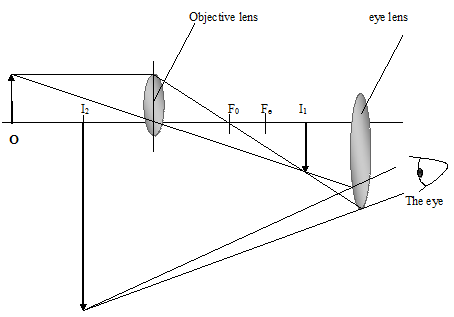 The compound microscope uses two lens; the objective and eye lens. The objective lens produces an enlarged, real and inverted image I, of a small object O. the image I, which is formed between the eye lens and its principles focus i.e. then acts as an object for the eye lens which gives a virtual image I2 that is highly magnified. 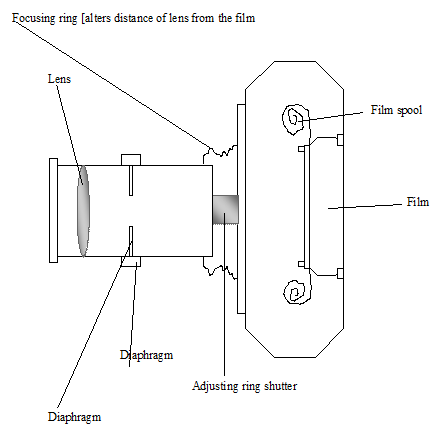 A camera consists of a lens and a sensitive film mounted in a light – tight box. The focusing ring is used to adjust the distance between the lens and the film.

A shelter of variable speed and a diaphragm of variable aperture [opening] are used to regulate the amount of light – energy admitted through the lens. A sharp image is obtained by turning the screw mount on the lens. 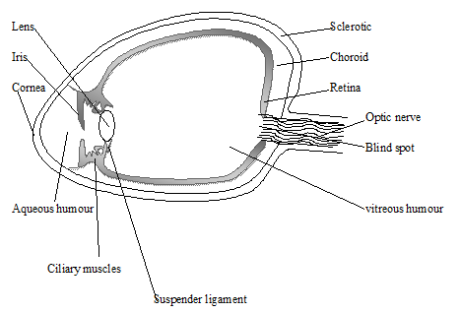 The eye is similar to the camera. The eye has a tough white will called the sclerotic. The camera is the transport from that allows light to pass through. This light passes thru water like aqueous humor behind the connection.

This iris is a coloured part of the eye which automatically adjusts the size of the opening of the eye called the pupil; – according to intensity of light that falls on it.

The lens is convex who shapes can be altered to focus light. This variation of the thickness of the eye lens is called accommodation and is done by the culinary muscles. The light is then transmitted through the vitreous humors to form a real but inverted image on the retina.

This image is then transmitted to the brain by a nerve called the optic nerve. This optic nerve is connected to the retina at the blind spot. This sport is not sensitive to light.

The camera differs from the eye in that the focal length of the lens in a camera is varied by adjusting the distance of the lens from the film while the eye. The thickness of the lens changes.

Defects of vision and their corrections

Normal eye can accommodate clear vision of object arm infinity where [infinity means from point] to about 25cm from the eye.

It caused by the eye ball being too small [short] thus the image of objects at near point is formed behind the retina.

It can be corrected by using convex lens which refracts the rays from the object at near point as though they were from the far point and thus the final image after the refraction is formed on the retina.

A short sighted person can see clearly objects that are near but these objects that are distant appear blurred. The image of such an object is formed in front of the rating because the eye ball is or big or long.

These defects could also be because of variation in thickness of the length i.e. for short sightedness the lens of the eye is too thick. We can correct the object by using concave lens that refracts light rays from a far point as though they were coming from the near point. 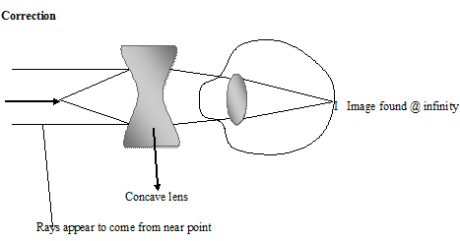 THIS VIDEO EXPLAIN MORE ABOUT THE EYE

Dispersion is the phenomenon where white light is separated out into different colours due to the difference in the refractive index of each colour of light in a given medium. The medium that is often used is a transparent glass prism.

The refractive index of each colour of light varies and depends on the length of the colour. White light consists of seven colours which are red, orange, yellow, green, blue, indigo and violet.

Dispersion of light by a glass prism 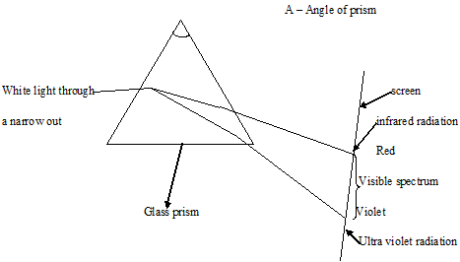 Which of the radiation is harmful to the body, filtered by the ozone layer?

The spectrum of colour formed during such dispersion by the prism is impure because the images of the colour are not distinct but over lap at their ages.

Production of a fairly pure spectrum

A pure spectrum is one in which different coloured image are monochromatic [they contain only one colour of light. 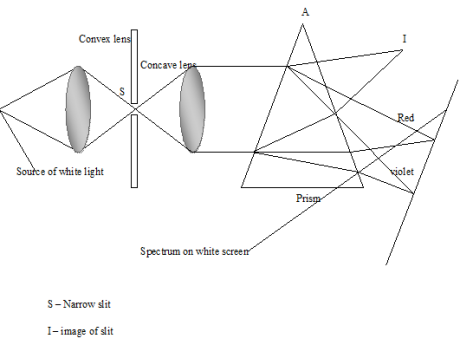 The first convex lens after the source white light is used to focus light onto the narrow slit[s]. The second convex lens forms the image eye of the slit. The prism produces a spectrum of seven colours on the white screen.

The spectrum consists of a series of coloured images of the slit all touching one another. If the slit is made narrower over lapping of colours is reduced to a minimum and the resulting spectrum is fairly poor.

Production of a pure spectrum 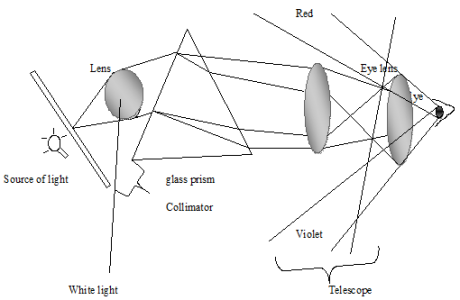 This forms the collimator. This light is refracted by a glass prism which disperses the different colours of light beginning each colour to its own focus in the focal plane of a second converging lens.

The spectrum is finally formed on a white screen which is placed at the principal focus of the second lens. The second lenses with cross wires in its focal plane together with the eye piece [lens] form the telescope.

Recombination of the colours of the spectrum 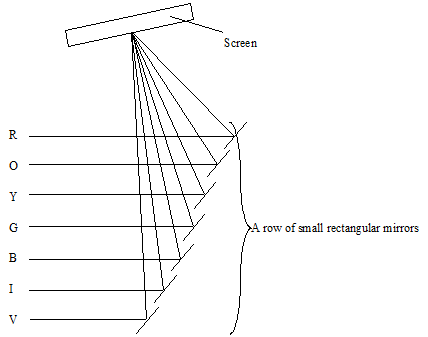 A similar result can be obtained if a disc painted with sectors of colours of spectrum is rotated at a high speed.

When all the colours in white light are reflected by a body, then the object appears white.

However, when all the colours of white light are observed, the object appears black i.e. blackness is due to absence of light of any colour.

Conversely some colours may be observed while others are reflected by an object, hence the object appears e.g. leaves of a plant appears green because they have absorbed all the other colours of light and reflect green colour only.

Conversely, yellow petals appear black only in blue and violet light, they appear yellow in only yellow and yellow in white in red light they look red and in green light looks green

These are colours of light that cannot be obtained by mixing colours. They are red, green and blue.

These are colours that are obtained by mixing two other colours. These include;

A mixture of three primary colours gives white colour. These lead to the following expectations;-

Two colours such as these that give white light when added together are known as complementary colour. The above results can be summarized by three over lapping circular patches of green, red and blue light as shown below. 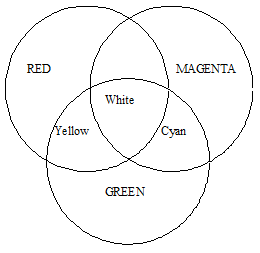 White light shown on coloured filter and monochromatic light on a secondary colour can be illustrated using the following diagrams;- 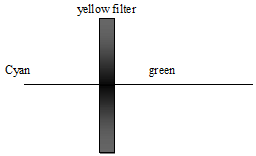 When a secondary coloured light is shown on coloured object , only the colour common to both the light and the object is reflected [ or transmitted ] while the rest are absorbed.