This unit is about Adhesion and Crystallization as you see above.

This is the force of attraction between molecules of the same substances.

This is the force of attraction between molecules of different substances

The adhesion of water to glass is stronger than cohesion in water e.g. spilling water on a glass surface; it spreads out and wets the glass.

This is the rising of liquids in narrow tubes

If a glass of Narrow bore is dipped into water, the water rises in the tube to a height of a few centimeters. The narrower the tube, the greater the height.

This is because the Adhesion between water and glass is greater than the cohesion is water molecules. The surface of the water comes upwards forming a meniscus as it rises

In mercury, since cohesion is greater than Adhesion between mercury and glass molecules, the level of mercury falls below the tube. The narrower the tube, the lower the level. 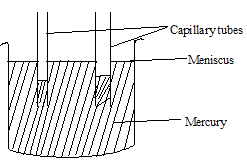 The mercury surface, curved down wards

Copper [11] sulphate is dissolved in water in a beaker, the solution is warmed up and more solute is added until an excess of solid is present.

The liquid is decanted into a crystallization dish. The solution is left to cool in a place sheltered from droughts of air

Crystals of copper [11] sulphate are observed after a few days.

This is the process through which crystalline phase is separated from a fluid e.g. a solution

This is the regular and repeated three dimension arrangement of atoms in a crystal.

This is the tendency to split along flamer determined by the crystal structures.

Water is poured into a clean waxed tray to the brim like lycopodium powder is sprinkled lightly on the surface a drop of deice acid is put on the water; it spreads in the form of a circular film with molecules standing upright.

To determine the volume of one drop, a solution of oleic are closely parked leaving no space for air, molecules] drops are realized into a measuring cylinder.

The volume [V] of 100 drops is determined, therefore the volume of one drop. 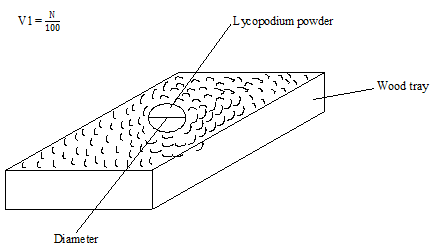 The diameter of the film is obtained by measuring the length as shown in the diagram. This can be done three times to obtain average.

In an oil film experiment, 25 drops of oleic and solution where found to have a volume of 12.5cm3. A drop is obtained and put over water surface and a fill of radius = 3.5cm is formed. Determine the size of the molecule.