This unit is about Radiation as a form of heat transfer followed by the Kinetic theory of Matter.

Both conduction and convection are ways of conveying heat from one place to another which require prescience of a material substance that is either a solid, liquid or gas.

The 3rd process of heat transmission which does not require a material medium is called radiation.

Radiant energy consists of invisible electromagnetic waves that are able to pass through a vacuum. 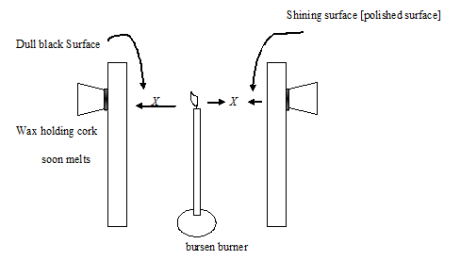 The absorbing power of dull black and shiny surface are compared using two sheets of bin plates one shiny and the each plate. A cork is fixed by means of little melted paraffin wax.

The plates are set up vertically, a short distance apart with a Bunsen burner midway between.

When the burner is lit, both surfaces receive equal amounts of radiation. In a very short time, wax on the dull black plate melts and the cork slides off.

The wax on the shiny plate however, remains un melted. This shows that the dull black surface is a much better absorber of radiation than the shiny surface.

The shiny surface is therefore, a good reflector of radiation.

COMPARISONS OF RADIATION FROM DIFFERENT SURFACES

The rate at which a body radiates energy depends on its temperature and the nature of its surface.

This can be tested using Leslies’ cube. The sides of the cube have a variety of furnishes e.g. dull black, dull white highly polished.

The hotter cube is filled with hot water and the radiation from each surface is detected by a thermopile.

The cube is filled with hot water and a thermopile is placed at the same distance from each face in turn.

In each case, the steady deflection obtained on the galvanometer is recorded.

The results show that the dull black surface produces the largest deflection and that the highly polished surfaces produce a smallest deflection.

A vacuum flask is used to maintain temperatures of substances.

The liquid can be kept hot or cold because the heat loss by convection and conduction are reduced by the vacuum space between the double walled glass vessels.

Heat loss radiation is reduced by the vacuum silver glass walls; any heat that tries to escape is reflected back 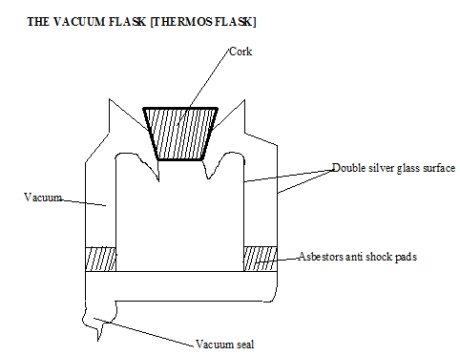 Heat radiation from the sun are trapped and reflected by a highly polished silvered converging container as below. The heat converges at a desired point to serve the purpose of heating.

THIS VIDEO EXPLAINS MORE ABOUT RADIATION

Differences between liquids solids and gases

The molecules of solids vibrate in one position. 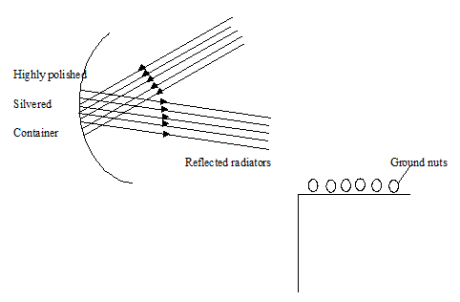 Matter is made up of small particles called atoms or molecules. The molecules are in can star rapid motion or vibration. The higher the temperature the faster the motion of the molecule. 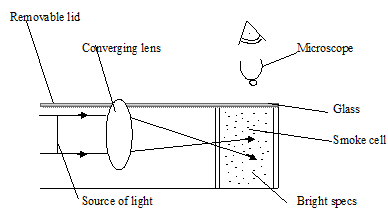 Bright specs of light moving random only and very fast are observed through the microscopes.

These are small particles which are strongly illuminated by the source of light. Particles are in constant motion because they are call finding with fast moving air particles.

The above experience proves that matter is made up of particles that are in constant motion.

THE KINETIC THEORY OF MATTER IS EXPLAINED BETTER IN THIS VIDEO