Muscle is a soft tissue found in most animals. Muscle cells contain protein filaments of actin and myosin that slide past one another, producing a contraction that changes both the length and the shape of the cell. Muscles function to produce force and motion. They are primarily responsible for maintaining and changing posture, locomotion, as well as movement of internal organs, such as the contraction of the heart and the movement of food through the digestive system via peristalsis. A human body have more than 600 muscles.

Muscles are all made of the same material, a type of elastic tissue (sort of like the material in a rubber band). Thousands, or even tens of thousands, of small fibers make up each muscle.

There are three different types of muscles in human body and these includes smooth muscle, cardiac muscle, and skeletal muscle. 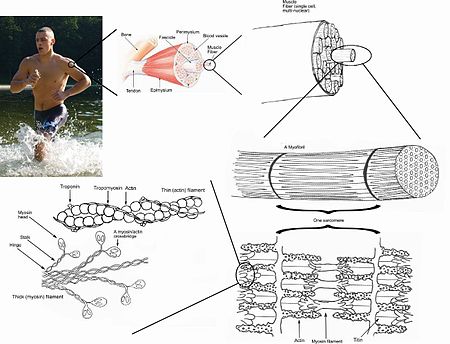 Smooth muscles sometimes also called involuntary muscles  are usually in sheets, or layers, with one layer of muscle behind the other. You can’t control this type of muscle. Your brain and body tell these muscles what to do without you even thinking about it. You can’t use your smooth muscles to make a muscle in your arm or jump into the air.

But smooth muscles are at work all over your body. In your stomach and digestive system, they contract (tighten up) and relax to allow food to make its journey through the body. Your smooth muscles come in handy if you’re sick and you need to throw up. The muscles push the food back out of the stomach so it comes up through the esophagus and out of the mouth.

Smooth muscles are also found in your bladder. When they’re relaxed, they allow you to hold in urine (pee) until you can get to the bathroom. Then they contract so that you can push the urine out. These muscles are also in a woman’s uterus, which is where a baby develops. There they help to push the baby out of the mother’s body when it’s time to be born.

You’ll find smooth muscles at work behind the scenes in your eyes, too. These muscles keep the eyes focused.

THIS VIDEO EXPLAINS HOW MUSCLES ARE NAMED

The muscle that makes up the heart is called cardiac muscle. It is also known as the myocardium. The thick muscles of the heart contract to pump blood out and then relax to let blood back in after it has circulated through the body.

Just like smooth muscle, cardiac muscle works all by itself with no help from you. A special group of cells within the heart are known as the pacemaker of the heart because it controls the heartbeat.

Now, let’s talk about the kind of muscle you think of when we say “muscle” the ones that show how strong you are and let you boot a soccer ball into the goal. These are your skeletal muscles sometimes called striated muscle because the light and dark parts of the muscle fibers make them look striped.

Skeletal muscles are voluntary muscles, which means you can control what they do. Your leg won’t bend to kick the soccer ball unless you want it to. These muscles help to make up the musculoskeletal system the combination of your muscles and your skeleton, or bones.

Together, the skeletal muscles work with your bones to give your body power and strength. In most cases, a skeletal muscle is attached to one end of a bone. It stretches all the way across a joint (the place where two bones meet) and then attaches again to another bone.

Skeletal muscles are held to the bones with the help of tendons. Tendons are cords made of tough tissue, and they work as special connector pieces between bone and muscle. The tendons are attached so well that when you contract one of your muscles, the tendon and bone move along with it.

Skeletal muscles come in many different sizes and shapes to allow them to do many types of jobs. Some of your biggest and most powerful muscles are in your back, near your spine. These muscles help keep you upright and standing tall.

They also give your body the power it needs to lift and push things. Muscles in your neck and the top part of your back aren’t as large, but they are capable of some pretty amazing things: Try rotating your head around, back and forth, and up and down to feel the power of the muscles in your neck. These muscles also hold your head high.

You may not think of it as a muscular body part, but your face has plenty of muscles. You can check them out next time you look in the mirror. Facial muscles don’t all attach directly to bone like they do in the rest of the body. Instead, many of them attach under the skin. This allows you to contract your facial muscles just a tiny bit and make dozens of different kinds of faces. Even the smallest movement can turn a smile into a frown. You can raise your eyebrow to look surprised or wiggle your nose.

And while you’re looking at your face, don’t pass over your tongue a muscle that’s attached only at one end! Your tongue is actually made of a group of muscles that work together to allow you to talk and help you chew food. Stick out your tongue and wiggle it around to see those muscles at work.

Because there are so many skeletal muscles in your body, we can’t list them all here. But here are a few of the major ones:

The muscular system consists of all the muscles present in a single body. There are approximately 650 skeletal muscles in the human body, but an exact number is difficult to define. The difficulty lies partly in the fact that different sources group the muscles differently and partly in that some muscles, such as palmaris longus, are not always present.

A muscular slip is a narrow length of muscle that acts to augment a larger muscle or muscles.

The muscular system is one component of the musculoskeletal system, which includes not only the muscles but also the bones, joints, tendons, and other structures that permit movement called sarcomeres. The striated appearance of both skeletal and cardiac muscle results from the regular pattern of sarcomeres within their cells. Although both of these types of muscle contain sarcomeres, the fibers in cardiac muscle are typically branched to form a network. Cardiac muscle fibers are interconnected by intercalated discs, giving that tissue the appearance of a syncytium.

The filaments in a sarcomere are composed of actin and myosin.

All muscles are derived from paraxial mesoderm. The paraxial mesoderm is divided along the embryo’s length into somites, corresponding to the segmentation of the body (most obviously seen in the vertebral column. Each somite has 3 divisions, sclerotome (which forms vertebrae), dermatome (which forms skin), and myotome (which forms muscle). The myotome is divided into two sections, the epimere and hypomere, which form epaxial and hypaxial muscles, respectively. The only epaxial muscles in humans are the erector spinae and small intervertebral muscles, and are innervated by the dorsal rami of the spinal nerves. All other muscles, including those of the limbs are hypaxial, and inervated by the ventral rami of the spinal nerves.

During development, myoblasts (muscle progenitor cells) either remain in the somite to form muscles associated with the vertebral column or migrate out into the body to form all other muscles. Myoblast migration is preceded by the formation of connective tissue frameworks, usually formed from the somatic lateral plate mesoderm. Myoblasts follow chemical signals to the appropriate locations, where they fuse into elongate skeletal muscle cells.

Movement is when the living organism moves a body part or parts to bring without a change in the position of the organisms. Locomotion is when the movement of a part of the body leads to change in the position and location of the organism. Both of these are brought about by the joint efforts of the skeletal and muscular systems. Movement is seen in both vertebrates and invertebrates.

When we talk about locomotion and movement, there are three types of movements:

Muscles found in higher vertebrates are of three types:

These muscles are voluntary in nature which means their movement is under the control of our will. They are mainly responsible for bringing about the movement of posture and location of the organism. They are called striated muscles due to the presence of striations present on them when seen under the microscope.

These muscles are involuntary in nature which means their movement is not under the control of our will. When seen under the microscope, they do not have any striations on them. These muscles are found in the digestive tract and reproductive system.

These muscles are specialized muscles that are found only in the heart. They are involuntary muscles which have striations on them. They have the property to contract and relax in a rhythmic manner.

The skeletal system is made up of bones and cartilages. There are a total of 206 bones in the body. They are divided into the Axial skeleton and the appendicular skeleton.

They form an integral portion of the locomotive apparatus. A joint is a name given to two or more bones that articulate with each other to bring about a movement. Depending on the type of movement they allow, joints can be of three types: Fixed, slightly moveable and moveable joints.

THIS VIDEO EXPLAINS MOVEMENT AND LOCOMOTION