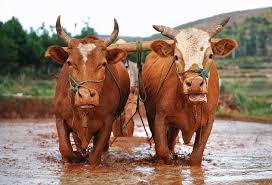 Use of animal power generally enables farmers in sub-Saharan Africa to increase agricultural production and improve the quality of life. Effective use of working animals depends on an understanding of the capabilities of the animals for work, their husbandry requirements and the factors which can influence their performance.

These issues are reviewed in this paper in the context of the use of animal power in agriculture in sub-Saharan Africa. The type of animal used for work determines power available to the farmer. The performance of donkeys, horses and cattle have been compared in work tests.

Equids are more suited to rapid low draught activities where their faster speed can be used to advantage. At higher draught forces, where speed is less important, the additional weight and power of cattle are an advantage. Use of heart rate recovery after work gives a reasonable indication of fatigue and fitness of equids, when test conditions are standardized.

Although feed requirements for work are generally low, feed quality can be so poor that animals are unable to eat enough to meet energy needs for work, and so lose weight during the work season.

However, improvements in work performance are not always seen following supplementary feeding in the dry season and the economics need to be considered in each case. Food availability, diseases and heat stress, the major constraints to performance of draught cattle and donkeys working in sub-Saharan Africa, are discussed.

The contribution of working animals to livelihoods: the example of working equids

The importance of domestic livestock, such as sheep, goats and cattle, to the livelihoods of the poor is clear, however, less evidence is available on the contributions of working animals to livelihoods. Working equids include donkeys, horses and mules. It is estimated, through informal research by the Brooke in nine countries, that between five and 20 people depend on every working equid . Results from a recent study in Ethiopia revealed the important
political, economic and social contribution that equine ownership makes to households , but, unlike livestock,
the economic value of working equids is more difficult to quantify, particularly regarding their use in subsistence
farming systems.

Working equids support an estimated 300 million people globally, often in the most marginalised communities.
In rural communities they are used in subsistence farming systems to carry water, manure, firewood and animal
fodder and, in the case of pastoral people, to transport Rev. sci. tech. Off. int. Epiz., 33 (1) 199 whole households. Equids are used throughout the range of agricultural activities, from ploughing and sowing to harvesting and threshing, and for the transport of agricultural produce.

In both rural and urban areas working equids are a major means of transport, both as ridden and pack animals and
through pulling carts. They transport goods to and from markets, farm inputs to farmsteads, children to school, and
the sick and women in labour to clinics and hospitals. In the export of high-value products such as coffee and chocolate, working animals, including equids, are often the first link in the transport chain, moving goods to district and regional hubs for onward motorised transport. In Guatemala, for example, 85% to 90% of all coffee produced is transported on the back of a pack animal before export (Sapon, 2011 personal communication).

Commercially, these animals may be used as taxis or rented out to small businesses. Some businesses, such as building companies and brick manufacturers, may own or rent large numbers of working equids. For example, hotels in Cairo have been built with bricks that were transported by donkey cart 20 km from the brick kilns of Helwan (5).

A recent study on the contributions of working donkeys, horses and mules to human livelihoods in Ethiopia found
that 56% of households surveyed kept donkeys mainly for pack services (to generate income and for homestead
use), 26% for cart use (to generate income), and 14% for pack use but exclusively for homesteads (4). Many working
equids are used in the tourist trade, where they transport food and drinks to hotels and provide riding or carriage
services for tourists and pilgrims. 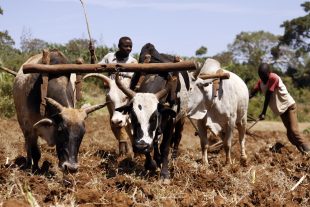 An ox-plough is a single mouldboard plough that is hulled mainly by oxen, although camels, donkeys and mules can also be deployed. Ox-ploughing has been used for centuries, dating back to olden times in Asia and later spreading to Africa.

The ox-plough remains the single most important primary tillage tool in Sub-Saharan Africa.

In Uganda, ox-traction is largely used in the eastern and north-eastern parts due to the fairly flat terrain, light soils and hardened breeds of animals that can handle the heavy workload of ploughing.

Understanding the ox-plough and its parts

For primary tillage operations, ox-ploughs are usually charged between UGX 80,000 and UGX 150,000  per acre, depending on nature of the field (wetland/low land or not), assumed moisture content (dryness) of the soil and seasonal demand for ploughing services.

Ox-plough operators usually start their works as early as 5:00 am and stretch to 9:00 or 10:00 am because the strength and output of the oxen are affected by the rising  temperatures.

The desirable plough depth is 8 inch (20 cm) though 10 to15 centimetre deep furrows are the most common.

A cleared acre piece of land can be ox-ploughed in 2 consecutive operations using two pairs of oxen whereas a low land with heavy or sticky soils can even take four operations to complete.

Although two pairs of oxen are desirable for primary tillage operations, single pair use has gained prominence in the countryside due to dwindling numbers of oxen.

Where conservation agriculture has been promoted and practised, ox-plough use is one of the most favourable practices since it leaves unploughed land between the farrows and offers minimum depth.

There has been massive forest and wetlands reclamations for farming. Reclaimed forest lands with tree stumps, anthills, uneven surfaces, and heavy or soggy wetland soils are unfavourable for tractor ploughing but favourable for ox-ploughing.

Landholding as small as half an acre makes ox-ploughs economically more favourable than  tractor ploughing.

The ease of assembly, repair and availability of spare parts for ox-ploughs has made their continued use unchallenged.

There are many local shops and artisans that deal in ox traction products as compared to tractors that require more specialised inputs and skills.

The initial cost of ox-ploughs is quite affordable to individual farmer as compared to tractor machinery.

In inaccessible and hard-to reach terrains, ox-ploughs can be easily deployed

Whereas tractors and hand-hoes are disposed of as scrap and other rejects, oxen are sold to generate cash at the expiry of their ox traction use.

There are no costs associated with servicing oxen just like it is the case with tractor use.

Oxen can be used for other purposes including transport, recreation, animal breeding, sale for cash, among other purposes as compared to tractors or hand-hoes.

The process of using ox-ploughs in the fields is very easy and simple to be handled by youth and women.

What to consider when choosing oxen and ploughs

Local breeds with short legs and strong, muscular bodies are desirable because they can withstand the local environment and resist diseases.

Though not a must, horned oxen are preferred so as to hold and support the yokes (the wooden component that transmits the animals’ force to the hulled implements) in position during operations.

To benefit from a longer working life of the oxen, moderately aged oxen should be considered. Animals that have shed off all their milk teeth and have not fully developed their centre teeth are desirable.

Oxen should be castrated to avoid getting distracted by females and to remain docile and manageable.

The yoke (the wooden component that transmits the animals’ force to the hulled implements), should be strong, durable, light in weight and made from locally available materials.

To achieve desired yoke durability and strength, the wood should be seasoned by placing it in water or burying it underground for at least one week.

The chosen yoke material should have its outer coating peeled off. It should be straight, free from swellings or knots, and should be dried upon seasoning. The materials should be longer than the required yoke length so as to account for a reduction in length upon season and drying.

The yoke should be strong enough to avoid breakage or damaged during operations. However, it should not be too heavy to add excessive weight to the animals as this would affect their ploughing output.

The trek chain that connects the oxen to the ploughs should be long and strong enough not to inflict any injuries on the working animals.

The animals should be lively – feeding, seeing, hearing and moving normally with no impairments.

The causes of poor welfare outcomes frequently identified for working animals include poor nutrition, poor harness
design and use, overwork and inappropriate management practices, such as beating and working animals at too
young an age. Additional related problems include wounds, lameness, colic in equids and preventable infectious disease.

Initiating factors are usually multi-layered. They include traditional or cultural beliefs and economic constraints.
Cultural factors can include traditional beliefs in harmful practices such as nostril-slitting and firing (burning part of
the animal’s body with red-hot metal in the belief that it has medical benefits). Economic factors commonly constrain marginalised communities from accessing resources such as feed and water, good harnessing and carts, quality farriery, appropriate shelter, and health care for their working animals, which all have a direct impact on animal welfare.

Inadequate knowledge and inappropriate attitudes and practices in the management and welfare of working
animals can also contribute to welfare problems. This is especially so where new communities who do not have a
tradition of working with draught animals, begin to do so.

Current expansion of donkey ownership, for example, may be to areas where equine management is not part of the
traditional culture. The association of working animals with low socio-economic conditions and underdevelopment
does not help the poor status of donkeys in particular.

Understanding such underlying factors can guide the selection and use of both animal-based and resource-based
indicators of welfare status for assessing the welfare benefits of corrective initiatives.

As evidenced above, the challenges to good welfare in working animals are numerous. However, it is important to
be aware of the wider welfare frameworks that do not just encompass physical health. A framework commonly used,
which includes both physical and mental aspects, involves the management recommendations that are allied to the Five

Freedoms developed by the Farm Animal Welfare Council. The management of animal welfare first requires the
means to assess it. Thus, objective welfare assessment has remained an area of concern and considerable interest,
and ways to develop practical assessment tools, even in conventional farming systems, are increasingly being
explored.

Of course, animal welfare assessment usually references welfare standards, and it would be beneficial to develop
such standards for working animals. Importantly, these standards should leave scope for further modifications
and improvement based on research and field experience.

The Brooke has developed a tool for working equids based on these principles (5). The tool aims to provide a baseline
data at population level using a collection of animal-based indicators and to measure the impact of targeted
interventions on welfare.

Situation-specific indicators, both animal-based and resource-input-based, are commonly
used and the participation of animal-owning communities is encouraged to empower their members to identify and
measure changes in their animals’ welfare themselves (10).