Law of diminishing returns & the three stages of production

The law of diminishing returns describes the relationship between output and the variable input when other inputs are held constant.

Definition: If increasing amounts of one input are added to a production process while all other inputs are held constant, the amount of output added per unit of variable input will eventually decrease. It is also known as law of diminishing productivity or the law of variable proportions. 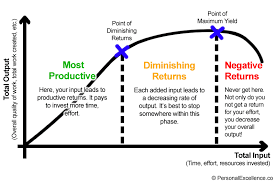 The classical production function can be divided into three regions or stages, each being important from the standpoint of efficient resources use.

Stage-I occurs when marginal physical product (MPP) > average physical product (APP). APP  is increasing throughout this stage, indicating that the average rate at which X is transformed into Y, increases until APP reaches its maximum at the end of Stage-I.

Stage-III occurs when MPP is negative. Stage III occurs when excessive quantities of variable input are combined with the fixed input, so much, that total physical product (TPP) begins to decrease.

–II is reached. That is because physical efficiency of variable resources, measured by APP, increases throughout stage –I.

A.   Relationship between TPP & MPP

B.   Relationship between MPP & APP

is based on exact MPPs

The point of diminishing returns can be defined to occur when MPP =APP that is Ep= 1 (lower boundary of stage II) & this is the minimum amount of variable input that will be used & it occurs when the efficiency of variable input is at its maximum. At the other end, MPP is zero, therefore Ep= 0. Thus the relevant production zone is when O ≤ Ep ≤ 1.

The optimum level of variable input is given by: