INTRODUCTION TO BENZENE AND ITS PHYSICAL PROPERTIES

ne, as shown on the left, is an organic aromatic compound with many interesting properties. Unlike aliphatic (straight chain carbons) or other cyclic organic compounds, the structure of benzene (3 conjugated π bonds) allows benzene and its derived products to be useful in fields such as health, laboratory synthesis, and other applications such as rubber synthesis. Benzene is unique because we can write a condensed formula for its ringed structure, C6H6.

Benzene derived products are well known to be pleasantly fragrant. For this reason, organic compounds containing benzene rings were classified as being “aromatic“ (sweet smelling) amongst scientists in the early 19th century when a relation was established between benzene derived compounds and sweet/spicy fragrances. There is a misconception amongst the scientific community, however, that all aromatics are sweet smelling and that all sweet smelling compounds would have a benzene ring in its structure. This is false, since non-aromatic compounds, such as camphor, extracted from the camphor laurel tree, release a strong, minty aroma, yet it lacks the benzene ring in its structure (See figure 1). On the other hand, benzene itself gives off a rather strong and unpleasant smell that would otherwise invalidate the definition of an aromatic (sweet-smelling) compound. Despite this inconsistency, however, the term aromatic continues to be used today in order to designate molecules with benzene-like rings in their structures. For a modern, chemical definition of aromaticity, refer to sections Aromaticity and Hückel’s Rule.

Figure 1. Top-view of camphor, along with its monoterpene unit. Notice how camphor lacks the benzene ring to be “aromatic”.

Many aromatic compounds are however, sweet/pleasant smelling. Eugenol, for example, is extracted from essential oils of cloves and it releases a spicy, clove-like aroma used in perfumes. In addition, it is also used in dentistry as an analgesic. Figure 2. Eugenol, an aromatic compound extracted from clove essential oils. Used in perfumes and as an analgesic.
The benzene ring is labeled in red in the eugenol molecule.

Is it cyclohexane or is it benzene?

Due to the similarity between benzene and cyclohexane, the two is often confused with each other in beginning organic chemistry students.

If you were to count the number of carbons and hydrogens in cyclohexane, you will notice that its molecular formula is C6H12. Since the carbons in the cyclohexane ring is fully saturated with hydrogens (carbon is bound to 2 hydrogens and 2 adjacent carbons), no double bonds are formed in the cyclic ring. In contrast, benzene is only saturated with one hydrogen per carbon, leading to its molecular formula of C6H6. In order to stabilize this structure, 3 conjugated π (double) bonds are formed in the benzene ring in order for carbon to have four adjacent bonds.

In other words, cyclohexane is not the same as benzene! These two compounds have different molecular formulas and their chemical and physical properties are not the same. The hydrogenation technique can be used by chemists to convert from benzene to cyclohexane by saturating the benzene ring with missing hydrogens.

Benzene can be drawn a number of different ways. This is because benzene’s conjugated pi electrons freely resonate within the cyclic ring, thus resulting in its two resonance forms.

As the electrons in the benzene ring can resonate within the ring at a fairly high rate, a simplified notation is often used to designate the two different resonance forms. This notation is shown above, with the initial three pi bonds (#1, #2) replaced with an inner ring circle (#3). Alternatively, the circle within the benzene ring can also be dashed to show the same resonance forms (#4).

The Phenyl Group (The Foundation of Benzene Derivatives)

Figure 5. Figure demonstrating the removal of hydrogen to form the phenyl group.

Different R groups on the phenyl group allows different benzene derivatives to be formed. Phenol, Ph-OH, or C6H5OH, for example, is formed when an alcohol (-OH) group displaces a hydrogen atom on the benzene ring. Benzene, for this very same reason, can be formed from the phenyl group by reattaching the hydrogen back its place of removal. Thus benzene, similar to phenol, can be abbreviated Ph-H, or C6H6. Figure 6. Epigallocatechin gallate (EGCG), an antioxidant found in green teas and its extracts, is famous for its potential health benefits. The molecule is a type of catechin, which is composed of multiple phenol (labeled in red) units (polyphenols -see polycyclic aromatics). Since catechins are usually found in plant extracts, they are often referred as plant polyphenolic antioxidants.

As you can see above, these are only some of the many possibilities of the benzene derived products that have special uses in human health and other industrial fields.

Unlike aliphatic organics, nomenclature of benzene-derived compounds can be confusing because a single aromatic compound can have multiple possible names (such as common and systematic names) be associated with its structure. In these sections, we will analyze some of the ways these compounds can be named.

For example, chlorine (Cl) attached to a phenyl group would be named chlorobenzene (chloro + benzene). Since there is only one substituent on the benzene ring, we do not have to indicate its position on the benzene ring (as it can freely rotate around and you would end up getting the same compound.) Figure 7. Example of simple benzene naming with chlorine and NO2 as substituents.

Instead of using numbers to indicate substituents on a benzene ring, ortho- (o-), meta- (m-), or para (p-) can be used in place of positional markers when there are two substituents on the benzene ring (disubstituted benzenes). They are defined as the following:

Continuing with the example above in figure 8 (1,3-dichlorobenzene), we can use the ortho-, meta-, para- nomenclature to transform the chemical name into m-dichlorobenzene, as shown in the figure below.

Here are some other examples of ortho-, meta-, para- nomenclature used in context:

However, the substituents used in ortho-, meta-, para- nomenclature do not have to be the same. For example, we can use chlorine and a nitro group as substituents in the benzene ring.

In conclusion, these can be pieced together into a summary diagram, as shown below:

In addition to simple benzene naming and OMP nomenclature, benzene derivtives are also sometimes used as the “parent” in the name of a larger compound. name. Figure 14. An example showing phenol as a base in its chemical name. Note how benzene no longer serves as a base when an OH group is added to the benzene ring.

Below is a list of commonly seen benzene-derived compounds. Some of these mono-substituted compounds (labeled in red and green), such as phenol or toluene, can be used in place of benzene for the chemical’s base name.

According to the indexing preferences of the Chemical Abstracts, phenol, benzaldehyde, and benzoic acid (labeled in red in Figure 16) are some of the common names that are retained in the IUPAC (systematic) nomenclature. Other names such as toluene, styrene, naphthalene, or phenanthrene can also be seen in the IUPAC system in the same way. While the use of other common names are usually acceptable inIUPAC, their use are discouraged in the nomenclature of compounds. Nomenclature for compounds which has such discouraged names will be named by the simple benzene naming system. An example of this would include toluene derivatives like TNT. (Note that toluene by itself is retained by the IUPAC nomenclature, but its derivatives, which contains additional substituents on the benzene ring, might be excluded from the convention). For this reason, the common chemical name 2,4,6-trinitrotoluene, or TNT, as shown in figure 17, would not be advisable under the IUPAC (systematic) nomenclature.

In order to correctly name TNT under the IUPAC system, the simple benzene naming system should be used:

Figure 18. Systematic (IUPAC) name of 2,4,6-trinitrotoluene (common name), or TNT.
Note that the methyl group is individually named due to the exclusion of toluene from the IUPAC nomenclature.

Figure 19. The common name 2,4-dibromophenol, is shared by the IUPAC systematic nomenclature. Only substituents phenol, benzoic acid, and benzaldehyde share this commonality.

Since the IUPAC nomenclature primarily rely on the simple benzene naming system for the nomenclature of different benzene derived compounds, the OMP (ortho-, meta-, para-) system is not accepted in the IUPAC nomenclature. For this reason, the OMP system will yield common names that can be converted to systematic names by using the same method as above. For example, o-Xylene from the OMP system can be named 1,2-dimethylbenzene by using simple benzene naming (IUPAC standard).

The Phenyl and Benzyl Groups While compounds like these are usually named by simple benzene type naming (chlorobenzene and bromobenzene), the phenyl group naming is usually applied to benzene rings where a substituent with six or more carbons is attached, such as in the diagram below.

Although the diagram above might be a little daunting to understand at first, it is not as difficult as it seems after careful analysis of the structure is made. By looking for the longest chain in the compound, it should be clear that the longest chain is eight (8) carbons long (octane, as shown in green) and that a benzene ring is attached to the second position of this longest chain (labeled in red). As this rule suggests that the benzene ring will act as a function group (a substituent) whenever a substituent of more than six (6) carbons is attached to it, the name “benzene” is changed to phenyl and is used the same way as any other substituents, such as methyl, ethyl, or bromo. Putting it all together, the name can be derived as: 2-phenyloctane (phenyl is attached at the second position of the longest carbon chain, octane). Additionally, other substituents can attach on the benzene ring in the presence of the benzyl group. An example of this can be seen in the figure below:

Similar to the base name nomenclature system, the carbon in which the base substituent is attached on the benzene ring is given the first priority and the rest of the substituents are given the lowest number order possible. Under this consideration, the above compound can be named: 2,4-difluorobenzyl chloride. To demonstrate how this flowchart can be used to name TNT in its common and systematic (IUPAC) name, a replica of the flowchart with the appropriate flow paths are shown below: 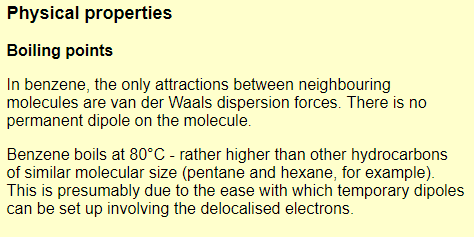 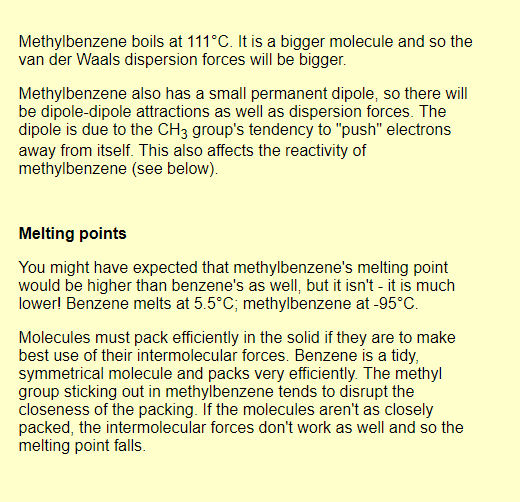 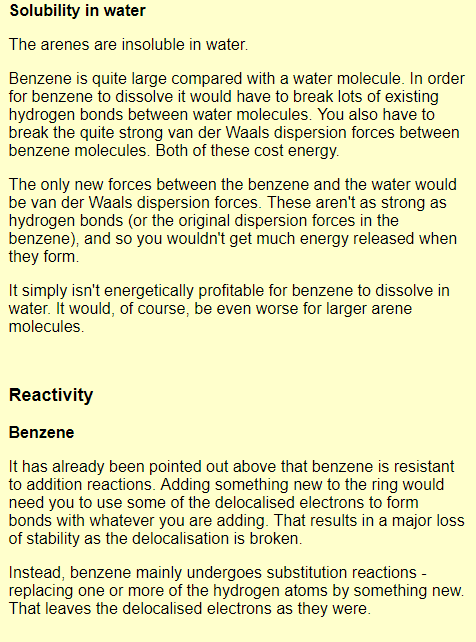 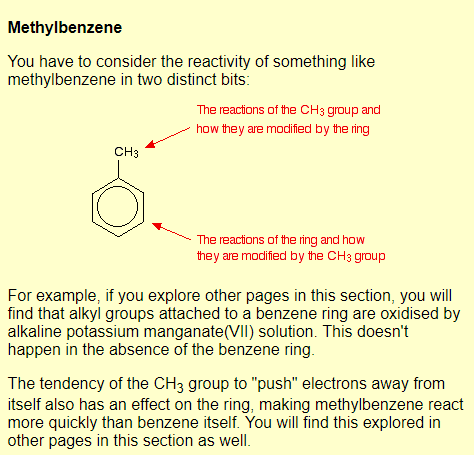