INTRODUCTION TO ALCOHOL AND THEIR PHYSICAL PROPERTIES 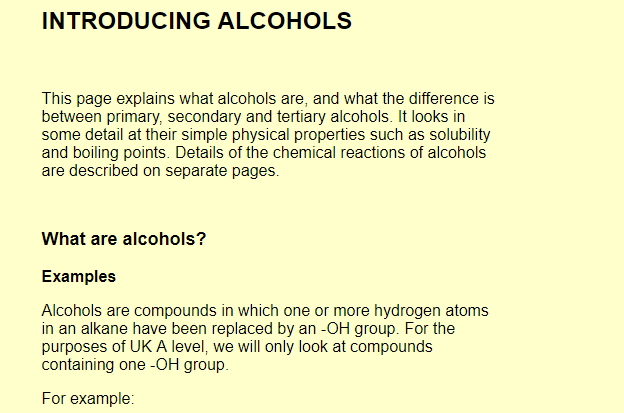 The different kinds of alcohols

Alcohols fall into different classes depending on how the -OH group is positioned on the chain of carbon atoms. There are some chemical differences between the various types.

In a primary (1°) alcohol, the carbon which carries the -OH group is only attached to one alkyl group.

Some examples of primary alcohols include:

Notice that it doesn’t matter how complicated the attached alkyl group is. In each case there is only one linkage to an alkyl group from the CH2 group holding the -OH group.

There is an exception to this. Methanol, CH3OH, is counted as a primary alcohol even though there are no alkyl groups attached to the carbon with the -OH group on it.

In a secondary (2°) alcohol, the carbon with the -OH group attached is joined directly to two alkyl groups, which may be the same or different.

In a tertiary (3°) alcohol, the carbon atom holding the -OH group is attached directly to three alkyl groups, which may be any combination of same or different.

In alkanes, the only intermolecular forces are van der Waals dispersion forces. Hydrogen bonds are much stronger than these and therefore it takes more energy to separate alcohol molecules than it does to separate alkane molecules.

That’s the main reason that the boiling points are higher.

. . . on the boiling points of the alcohols:

Hydrogen bonding isn’t the only intermolecular force in alcohols. There are also van der Waals dispersion forces and dipole-dipole interactions.

The hydrogen bonding and the dipole-dipole interactions will be much the same for all the alcohols, but the dispersion forces will increase as the alcohols get bigger.

These attractions get stronger as the molecules get longer and have more electrons. That increases the sizes of the temporary dipoles that are set up.

. . . on the comparison between alkanes and alcohols:

Even if there wasn’t any hydrogen bonding or dipole-dipole interactions, the boiling point of the alcohol would be higher than the corresponding alkane with the same number of carbon atoms.

Ethanol is a longer molecule, and the oxygen brings with it an extra 8 electrons. Both of these will increase the size of the van der Waals dispersion forces and so the boiling point.

If you were doing a really fair comparison to show the effect of the hydrogen bonding on boiling point it would be better to compare ethanol with propane rather than ethane. The length would then be much the same, and the number of electrons is exactly the same.

Solubility of alcohols in water

The small alcohols are completely soluble in water. Whatever proportions you mix them in, you will get a single solution.

However, solubility falls as the length of the hydrocarbon chain in the alcohol increases. Once you get to four carbons and beyond, the fall in solubility is noticeable, and you may well end up with two layers in your test tube.

The solubility of the small alcohols in water

Consider ethanol as a typical small alcohol. In both pure water and pure ethanol the main intermolecular attractions are hydrogen bonds.

However, when the molecules are mixed, new hydrogen bonds are made between water molecules and ethanol molecules.

The energy released when these new hydrogen bonds are made more or less compensates for that needed to break the original ones.

In addition, there is an increase in the disorder of the system – an increase in entropy. That is another factor in deciding whether things happen or not.

The lower solubility of bigger alcohols

Imagine what happens when you have got, say, 5 carbon atoms in each alcohol molecule.

That means that quite a lot of the original hydrogen bonds being broken aren’t replaced by new ones.

All you get in place of those original hydrogen bonds are van der Waals dispersion forces between the water and the hydrocarbon “tails”. These attractions are much weaker. That means that you don’t get enough energy back to compensate for the hydrogen bonds being broken. Even allowing for the increase in disorder, the process becomes less feasible.

As the length of the alcohol increases, this situation just gets worse, and so the solubility falls.