This unit gives introduction about Homeostasis

Homeostasis is the state of steady internal conditions maintained by living things. This dynamic state of equilibrium is the condition of optimal functioning for the organism and includes many variables, such as body temperature and fluid balance, being kept within certain pre-set limits (homeostatic range).

Homeostasis therefore, refers to any self-regulating process by which biological systems tend to maintain stability while adjusting to conditions that are optimal for survival. If homeostasis is successful, life continues; if unsuccessful, disaster or death ensues. The stability attained is actually a dynamic equilibrium, in which continuous change occurs yet relatively uniform conditions prevail.

Other variables include the pH of extracellular fluid, the concentrations of sodium, potassium and calcium ions, as well as that of the blood sugar level, and these need to be regulated despite changes in the environment, diet, or level of activity. Each of these variables is controlled by one or more regulators or homeostatic mechanisms, which together maintain life.

Homeostasis is brought about by a natural resistance to change in the optimal conditions, and equilibrium is maintained by many regulatory mechanisms. All homeostatic control mechanisms have at least three interdependent components for the variable being regulated: a receptor, a control centre, and an effector.

The receptor is the sensing component that monitors and responds to changes in the environment, either external or internal. Receptors include thermoreceptors, and mechanoreceptors. Control centres include the respiratory centre, and the renin–angiotensin system.

An effector is the target acted on, to bring about the change back to the normal state. At the cellular level, receptors include nuclear receptors that bring about changes in gene expression through up-regulation or down-regulation, and act in negative feedback mechanisms. An example of this is in the control of bile acids in the liver.

The tendency to maintain a stable, relatively constant internal environment is called homeostasis. The body maintains homeostasis for many factors in addition to temperature. For instance, the concentration of various ions in your blood must be kept steady, along with pH and the concentration of glucose. If these values get too high or low, you can end up getting very sick.

Homeostasis is maintained at many levels, not just the level of the whole body as it is for temperature. For instance, the stomach maintains a pH that’s different from that of surrounding organs, and each individual cell maintains ion concentrations different from those of the surrounding fluid. Maintaining homeostasis at each level is key to maintaining the body’s overall function.

So, how is homeostasis maintained? Let’s answer this question by looking at some examples.

Biological systems like those of your body are constantly being pushed away from their balance points. For instance, when you exercise, your muscles increase heat production, nudging your body temperature upward. Similarly, when you drink a glass of fruit juice, your blood glucose goes up. Homeostasis depends on the ability of your body to detect and oppose these changes.

How does this work? First, high temperature will be detected by sensors—primarily nerve cells with endings in your skin and brain—and relayed to a temperature-regulatory control center in your brain. The control center will process the information and activate effectors—such as the sweat glands—whose job is to oppose the stimulus by bringing body temperature down. 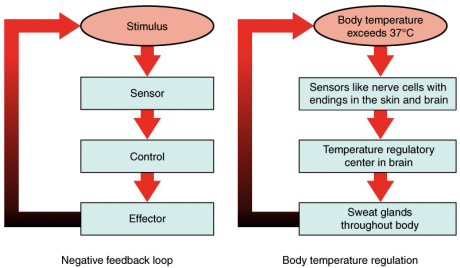 To make this idea more concrete, let’s take a closer look at the opposing feedback loops that control body temperature.

If you get either too hot or too cold, sensors in the periphery and the brain tell the temperature regulation center of your brain—in a region called the hypothalamus—that your temperature has strayed from its set point.

For instance, if you’ve been exercising hard, your body temperature can rise above its set point, and you’ll need to activate mechanisms that cool you down. Blood flow to your skin increases to speed up heat loss into your surroundings, and you might also start sweating so the evaporation of sweat from your skin can help you cool off. Heavy breathing can also increase heat loss. 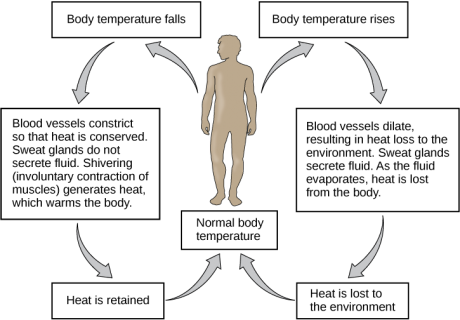 On the other hand, if you’re sitting in a cold room and aren’t dressed warmly, the temperature center in the brain will need to trigger responses that help warm you up. The blood flow to your skin decreases, and you might start shivering so that your muscles generate more heat. You may also get goose bumps—so that the hair on your body stands on end and traps a layer of air near your skin—and increase the release of hormones that act to increase heat production.

Notably, the set point is not always rigidly fixed and may be a moving target. For instance, body temperature varies over a 24-hour period, from highest in the late afternoon to lowest in the early morning.^22 Fever also involves a temporary increase in the temperature set point so that heat-generating responses are activated at temperatures higher than the normal set point.

Homeostasis depends on negative feedback loops. So, anything that interferes with the feedback mechanisms can—and usually will!—disrupt homeostasis. In the case of the human body, this may lead to disease.

To appreciate how diabetes occurs, let’s take a quick look at the basics of blood sugar regulation. In a healthy person, blood sugar levels are controlled by two hormones: insulin and glucagon.

Insulin decreases the concentration of glucose in the blood. After you eat a meal, your blood glucose levels rise, triggering the secretion of insulin from β cells in the pancreas. Insulin acts as a signal that triggers cells of the body, such as fat and muscle cells, to take up glucose for use as fuel. Insulin also causes glucose to be converted into glycogen—a storage molecule—in the liver. Both processes pull sugar out of the blood, bringing blood sugar levels down, reducing insulin secretion, and returning the whole system to homeostasis. 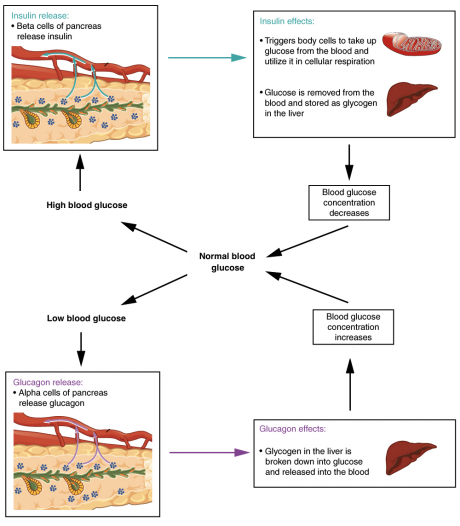 Glucagon does the opposite: it increases the concentration of glucose in the blood. If you haven’t eaten for a while, your blood glucose levels fall, triggering the release of glucagon from another group of pancreatic cells, the α cells. Glucagon acts on the liver, causing glycogen to be broken down into glucose and released into the bloodstream, causing blood sugar levels to go back up. This reduces glucagon secretion and brings the system back to homeostasis.

Diabetes happens when a person’s pancreas can’t make enough insulin, or when cells in the body stop responding to insulin, or both. Under these conditions, body cells don’t take up glucose readily, so blood sugar levels remain high for a long period of time after a meal. This is for two reasons:

A positive feedback loop comes into play during childbirth. In childbirth, the baby’s head presses on the cervix—the bottom of the uterus, through which the baby must emerge—and activates neurons to the brain. The neurons send a signal that leads to release of the hormone oxytocin from the pituitary gland.

Oxytocin increases uterine contractions, and thus pressure on the cervix. This causes the release of even more oxytocin and produces even stronger contractions. This positive feedback loop continues until the baby is born. 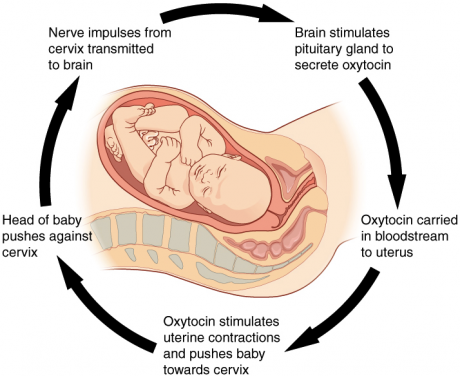