This unit explains the principles of Homeostasis

Homeostasis is the process of keeping the body environment in a steady state. The importance of this is that a great deal of the hormone system and autonomic nervous system is dedicated to homeostasis. The factors that need to be control are water, PH, oxygen, temperature, nutrients (glucose, ions), urea, and salinity.

The basic principle of homeostasis is when a condition deviate from a set point or norm, the corrective mechanism is triggered by the entity which is to be regulated. In the case of glucose regulation an increase in the amount of glucose trigger a process to decrease it. Conversely a decrease in the glucose in the blood glucose level triggers a process to increase it. In both cases the result is at reasonable constant level of glucose when a change in an entity brings about the opposite effect this is referred to as the negative feedback system most have receptors capable of detecting the change a control mechanism capable of initiating the appropriate corrective measure and effectors which will carry out theses corrective measures.

Thermoregulation is controlled by the thermoregulatory centre in the hypothalamus it receive input from two set of thermo receptors. The receptors detect the temperature of the blood as it passes through the brain and the skin monitors the external temperature. Both receptors are needed so that the body can make the appropriate adjustment. Mammals maintain a fairly constant body temperature and are called homoiotherms and have a temperature at around 37°C.

THIS VIDEO IS ABOUT THE PRINCIPLES OF HOMEOSTASIS 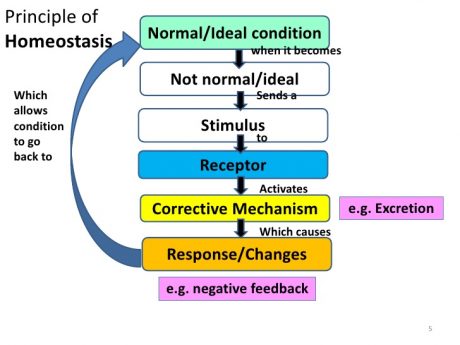 The renal capsule is for ultrafiltration of the blood. The renal artery is split into numerous arterioles, each feeding a nephron. The arterioles the splits into numerous capillaries, forming a knot refers to as the glomerulus. This is enclosed by the renal capsule, the first part of the nephron. The arterioles leading into the glomerlus is wider than the one leading out therefore there is a higher blood pressure in the capillaries of the glomerlus. This pressure forces the plasma out of the blood by ultrafiltration so all the molecular mass of less than 70K is filtered out of the blood to form a filtrate in the renal capsule.

THIS VIDEO EXPLAINS THE PRINCIPLES OF HOMEOSTASIS

In the distal convoluted tubule certain substances are actively transported from the blood into the filtrate. The important point about this secretion is that it is regulating by hormones, this is the homeostatic part of the kidney. Substances secreted include H+ (for pH homeostasis), K+ (for salt homeostasis), ethanol, toxins, drugs and other foreign substances. The function of this is homeostasis and secretion. 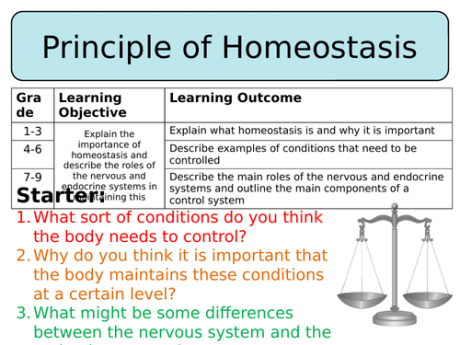 As the collecting duct passes through the hypertonic salt bath in the medulla, water leaves the filtrate by osmosis, so concentrating the urine and conserving water. The water leaves through special water channels in the cell membrane called aquaporins. These aquaporins channels can be controlled by the hormone antiduretic hormone, so allowing the amount of water in the urine to be controlled. More antiduretic hormone opens the channels, so more water is conserved in the body and more concentrated urine is produced.

The water potential of the blood must be regulated to prevent loss or gain of water from cells. It is controlled by the hypothalamus which contains osmorecepto cells, these receptors detect changes in the water potential of the blood passing through the brain, the hypothalamus controls the sensation of thirst and secrets the hormone antiduretic hormone. This is stored in the pituitary gland and it target cells of the collecting duct of the kidney nephrons.