Le Chatelier’s principle states that changes to an equilibrium system will result in a predictable shift that will counteract the change. 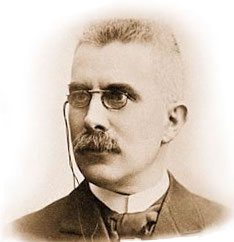 Le-Chatelier, a French Chemist, made a generalization to explain the effect of changes in concentration, temperature or pressure on the state of system in equilibrium. The generalization is known as Le-Chatelier’s Principle. It states that:

If a system in equilibrium is subjected to a change of concentration, pressure or temperature, the equilibrium shifts in the direction that tends to undo the effect of the change.

Let us consider the effect of these variables in the light of Le-Chatelier’s Principle, in the case of a few well known equilibria.

EFFECT OF CHANGE OF CONCENTRATION

In order to understand the effect of change of concentration on equilibrium, let us consider the reaction,

The same point can be understood in terms of the reaction quotient, Qc. 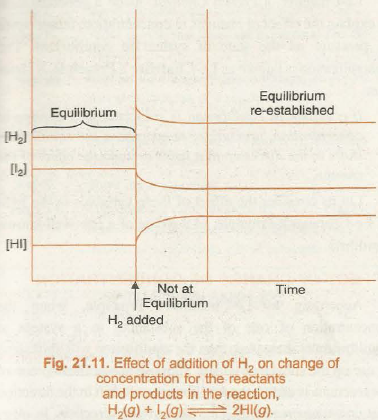 Similarly, we can say that removal of a product also favours the forward reaction and increases the concentration of the products. For example, in the large scale production of CaO, by calcination of lime stone (CaCO3), CO2 is continuously removed from the klin to shift the reaction in forward direction. Continuous removal of one of the products maintains Qc at a value less than Kc and thus reaction keeps on proceeding in the forward direction.

The effect of concentration on equilibrium can be demonstrated with the help of the following reaction:

A reddish colour appears on adding 2-3 drops of0.002 M potassium thiocynate solution to 5 mL of 0.2 M iron(ID) trioxonitrato (V) solution due to the formation of [Fe(SCN)]2+. The intensity of the red colour becomes constant when equilibrium is attained. This equilibrium can be shifted in either forward or backward directions depending on our choice of adding a reactant or a product.

Suppose, some iron(ill) salt is added to this equilibrium. The colour of the solution deepens immediately showing that there is increase in the concentration of the coloured complex ion [FeSCN]2+. This change is in accordance with Le-Chatelier’s principle. Addition of more of Fe3+ ions has resulted in increasing the concentration of the complex [FeSCN]2+ ions. Similarly, if some potassium thiocyanate is added at the equilibrium, the colour deepens again due to the formation of more of the [FeSCN]2+ ions.

EFFECT OF CHANGE IN PRESSURE

The change of pressure has effect only on those equilibria which involve gaseous substances and proceed with a change in the number of moles of the gases. According to Le-Chatelier’s principle, increase of external pressure should affect the equilibrium in such a way as to reduce the pressure. This implies that the equilibrium will shift in the direction which has smaller number of moles of the gaseous substances. This can be easily understood from the following equilibrium representing the formation of ammonia.

On increasing the pressure, the volume occupied by the system will decrease. As such there will be greater number of moles per unit volume. The effect of this change can be counteracted if the equilibrium shifts in the direction involving a decrease in the number of moles. This can happen only if nitrogen and hydrogen combine to form ammonia. Thus, increase in pressure in this case will favour the forward reaction

As the value of~ is less than Kc, the  reaction proceeds in the forward direction.

Now, let us consider some reactions which do not involve any change in number of moles of gaseous species:

In such reactions pressure does not have any effect on equilibrium.

Let us explain the effect of pressure on solubility of gases in liquid solvents on the basis of Le-Chatelier’s principle. As an example, let us study the equilibrium involving dissolution of CO2 in water. The equilibrium may be represented as:

Certain reactions such as formation of ammonia from nitrogen and hydrogen cannot be carried out at high temperatures because high temperature favours the backward reaction. So such reactions give poor yields at high temperatures and therefore, have to be carried out at low temperature. But at low temperature the rate of reaction becomes very slow and it takes very long time to attain the equilibrium. In order to increase the rates of such reactions, generally, catalysts are used so that equilibrium is attained early. For example, in case of formation of ammonia, a catalyst consisting of iron, is used to catalyse the reaction.