This unit explains Excretion in Human beings, plants and animals

Excretion refers to the process by which cells of living organisms rid themselves of waste products and of the nitrogenous by-products of metabolism. Through excretion organisms control osmotic pressure the balance between inorganic ions and water and maintain acid-base balance. The process thus promotes homeostasis, the constancy of the organism’s internal environment.

Every organism, from the smallest protist to the largest mammal, must rid itself of the potentially harmful by-products of its own vital activities.

THIS VIDEO EXPLAINS EXCRETION IN ANIMALS

This process in living things is called elimination, which may be considered to encompass all of the various mechanisms and processes by which life forms dispose of or throw off waste products, toxic substances, and dead portions of the organism. The nature of the process and of the specialized structures developed for waste disposal vary greatly with the size and complexity of the organism.

Four terms are commonly associated with waste-disposal processes and are often used interchangeably, though not always correctly: excretion, secretion, egestion, and elimination.

Excretion is a general term referring to the separation and throwing off of waste materials or toxic substances from the cells and tissues of a plant or animal.

The separation, elaboration, and elimination of certain products arising from cellular functions in multicellular organisms is called secretion. Though these substances may be a waste product of the cell producing them, they are frequently useful to other cells of the organism. Examples of secretions are the digestive enzymes produced by intestinal and pancreatic tissue cells of vertebrate animals, the hormones synthesized by specialized glandular cells of plants and animals, and sweat secreted by glandular cells in the skins of some mammals.

Secretion implies that the chemical compounds being secreted were synthesized by specialized cells and that they are of functional value to the organism. The disposal of common waste products should not, therefore, be considered to be of a secretory nature.

Egestion is the act of excreting unusable or undigested material from a cell, as in the case of single-celled organisms, or from the digestive tract of multicellular animals.

As defined above, elimination broadly defines the mechanisms of waste disposal by living systems at all levels of complexity. The term may be used interchangeably with excretion.

As you probably know, plants engage in something called photosynthesis, where they absorb carbon dioxide from the air and water from the soil and then, by utilizing energy absorbed from the sun, create sugars and oxygen as a byproduct. So, unlike humans who need to eat to acquire sugars for energy, plants produce their own food. In photosynthesis, oxygen is the metabolic waste and is excreted into the environment through little pores called stomata. Of course, this is very lucky for us because we depend on that very oxygen for our respiration (inhaling and exhaling).

However, did you know that plants also ‘respire?’ Of course, their respiration is quite a bit different from our own. Plants don’t breathe, but they do engage in a metabolic process, called respiration, to break down the sugars created by photosynthesis. It is similar to our own metabolic action because it also requires oxygen. In respiration, plants metabolize the sugars they produce in photosynthesis by combining them with oxygen to result in producing carbon dioxide and water. In plants, photosynthesis and respiration are divided between day and night, so they can spend the day utilizing the sun’s energy to make sugars and then break down those sugars at night.

THIS VIDEO EXPLAINS EXCRETION IN PLANTS

Excess water created by respiration or drawn up through the roots is also excreted into the environment, providing about 10% of the world’s air moisture. Through a process called transpiration, plants excrete water through stomata along their stems and the underside of their leaves, which then evaporates into the air. So, that morning dew that you see on plants when you wake up is actually the metabolic waste of plant respiration. Fun fact: one large oak tree alone can transpire up to 40,000 gallons of water into the air a year!

Single-celled organisms, such as amoebas and paramecium as well as bacteria, yeasts, and the cells of your body, all excrete molecular waste through a process called exocytosis. In exocytosis, little vesicles, or membrane-bound collections of molecules, are transported to the cell’s outer membrane. The two membranes join and then merge, which results in emptying, or excreting, the vesicle’s contents into the extracellular (outside the cell) environment.

Many unicellular organisms like Amoeba throw out their wastes by diffusion from their body surface. Protozoan’s have no organs for excretion. As they live in an aquatic habitat, their wastes are eliminated by diffusion through the plasma membrane.

The excretory organs of insects (e.g., grasshopper, cockroach and housefly) are also tubular. They remove nitrogenous wastes from the body fluid and help in maintaining the water balance in the body.

In vertebrates, the main organs of excretion and maintenance of water balance are the kidneys.

Although the kidneys are the main organs of excretion, the skin, lungs and liver also help in excretion.

Our skin has sweat glands, through which we excrete small amounts of water, urea and salts.

The liver excretes bile, which contains bile pigments. These are produced by the breakdown of old RBCs in the liver. As hemoglobin breaks down, its iron is retained, while the pigment (haem) is excreted with the bile. The liver also excretes cholesterol.

The lungs help in getting rid of carbon dioxide, formed as a result of cellular respiration, through exhalation.

Our excretory system consists of kidneys, blood vessels that join them, ureters, urinary bladder and urethra. They help produce and excrete urine.

There are two bean-shaped kidneys that lie in the abdominal cavity, one on either side of the vertebral column. The kidneys are reddish brown. Each of them is about 10 cm long and weighs about 150 g. Although they weigh less, they receive a lot of blood for filtration.

A volume of blood nearly equivalent to that in the whole body passes through the kidneys every four or five minutes. The kidneys produce urine to filter out the waste products, like urea and uric acid, from the blood. 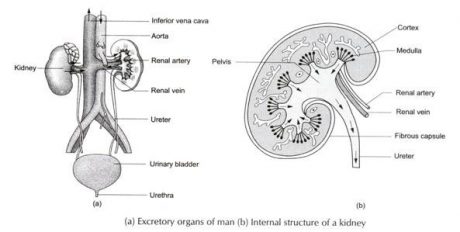 Internal Structure of a Kidney

Each kidney is enclosed in a thin, fibrous covering called the capsule. A renal artery brings blood into the kidney, along with nitrogenous waste materials. After filtration in the kidney, the purified blood leaves the kidney through a renal vein.

(1) An outer, dark, granular cortex and (2) an inner, lighter medulla. The hollow space from where the ureter leaves the kidney is called the pelvis. Each kidney is made up of numerous (about one million) coiled excretory tubules, known as nephrons, and collecting ducts associated with tiny blood vessels. A nephron is the structural and functional unit of a kidney, having three functions— filtration, reabsorption and secretion.

Structure and Function of a Nephron

THIS VIDEO EXPLAINS THE FUNCTION OF NEPHRON 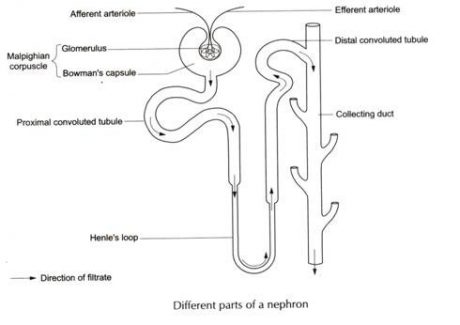 The process of excretion in nephron

The process of excretion may be divided into three stages- tubular secretion.

Water and small molecules are forced out of the walls of the capillaries of the glomerulus and Bowman’s capsule and enter the tubule of the nephron. Large molecules remain in the blood of the glomerulus. The filtrate contains water, glucose, salts, urea, vitamins, etc. It is called the glomerular filtrate.

These are reabsorbed by a process, which requires energy. Without reabsorption, these nutrients could have been lost with the urine. The filtrate now contains urea, some salts and water. Reabsorption of solutes into the blood increases the water concentration of the filtrate.

Then water is reabsorbed into the blood by the process of osmosis, and the osmotic balance is restored. The amount of water reabsorbed depends on the amount of excess water in the body and that of the dissolved waste to be excreted.

This reabsorption of water from the filtrate to maintain the water balance of the body fluid is known as osmoregulation. In this way the kidneys serve as water-conserving organs. After reabsorption from 180 L of filtrate in the kidney, only 1-2 L of urine is produced.

Some nitrogenous waste products like creatinin and some other substances like potassium ions are removed from the blood by the distal convoluted tubule, and are then added to the urine. This is called tubular secretion.

The urine that is formed continually collects in the urinary bladder. As the bladder expands, its pressure creates an urge to pass urine through the urethra. As the bladder is muscular, the urge to urinate is under voluntary nervous control. 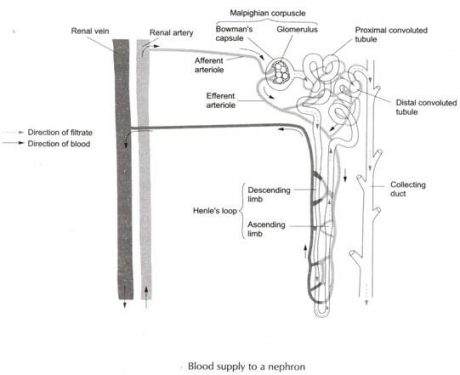 Kidney Failure and the Survival Kit—Haemodialysis

The kidneys may be damaged due to infection, injury, diabetes, and extremes of blood pressure. A damaged kidney cannot function efficiently to remove urea, ions, water, etc., from the blood. This malfunctioning results in the accumulation of toxic wastes like urea (uremia), which can lead to death.

One of the ways to treat kidney failure is to use a ‘dialysis machine’ that acts as an artificial kidney. It has a long tube like structure made of Cellophane suspended in a tank (dialyser) of a fresh dialysis fluid (dialysis). The Cellophane tube is partially permeable and therefore allows solutes to diffuse through. The dialysis fluid has the same concentration as normal tissue fluid, but nitrogenous wastes and excess salts are absent.

During dialysis, the blood of the patient is withdrawn from an artery and cooled at 0°C. It is maintained in a liquid state by adding an anticoagulant and by other special treatments. It is pumped through the dialysis machine. Here, the nitrogenous waste products from the blood diffuse into the dialysis fluid. The purified blood is then warmed to the body temperature and pumped back into the patient’s body through a vein.

The dialyser is specific for each patient to avoid infections. Dialysis through an artificial kidney has to be carried out at frequent intervals. This process of purification of blood is called haemodialysis.

A dialysis machine works like a kidney except that no selective reabsorption takes place in the former.

(3) Maintains the balance of sodium and potassium salts in a patient whose kidneys have failed. 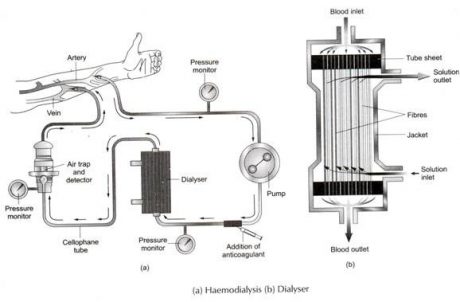