If the wire is then wound into a coil, the magnetic field is greatly intensified producing a static magnetic field around itself forming the shape of a bar magnet giving a distinct North and South pole.

The magnetic flux developed around the coil being proportional to the amount of current flowing in the coils windings as shown. If additional layers of wire are wound upon the same coil with the same current flowing through them, the static magnetic field strength would be increased. 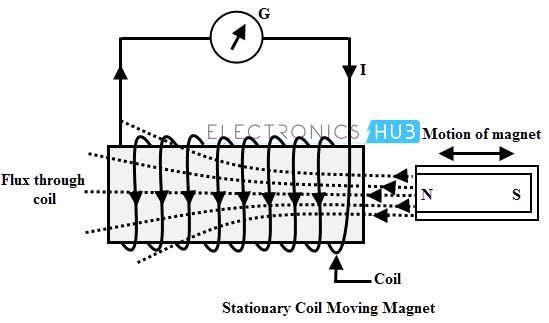 But what if we reversed this idea by disconnecting the electrical current from the coil and instead of a hollow core we placed a bar magnet inside the core of the coil of wire. By moving this bar magnet “in” and “out” of the coil a current would be induced into the coil by the physical movement of the magnetic flux inside it.

Likewise, if we kept the bar magnet stationary and moved the coil back and forth within the magnetic field an electric current would be induced in the coil. Then by either moving the wire or changing the magnetic field we can induce a voltage and current within the coil and this process is known as Electromagnetic Induction and is the basic principle of operation of transformers, motors and generators.

Electromagnetic Induction was first discovered way back in the 1830’s by Michael Faraday. Faraday noticed that when he moved a permanent magnet in and out of a coil or a single loop of wire it induced an ElectroMotive Force or emf, in other words a Voltage, and therefore a current was produced.

So what Michael Faraday discovered was a way of producing an electrical current in a circuit by using only the force of a magnetic field and not batteries. This then lead to a very important law linking electricity with magnetism, Faraday’s Law of Electromagnetic Induction. So how does this work?.

When the magnet shown below is moved “towards” the coil, the pointer or needle of the Galvanometer, which is basically a very sensitive centre zero’ed moving-coil ammeter, will deflect away from its centre position in one direction only. When the magnet stops moving and is held stationary with regards to the coil the needle of the galvanometer returns back to zero as there is no physical movement of the magnetic field.

Electromagnetic Induction by a Moving Magnet 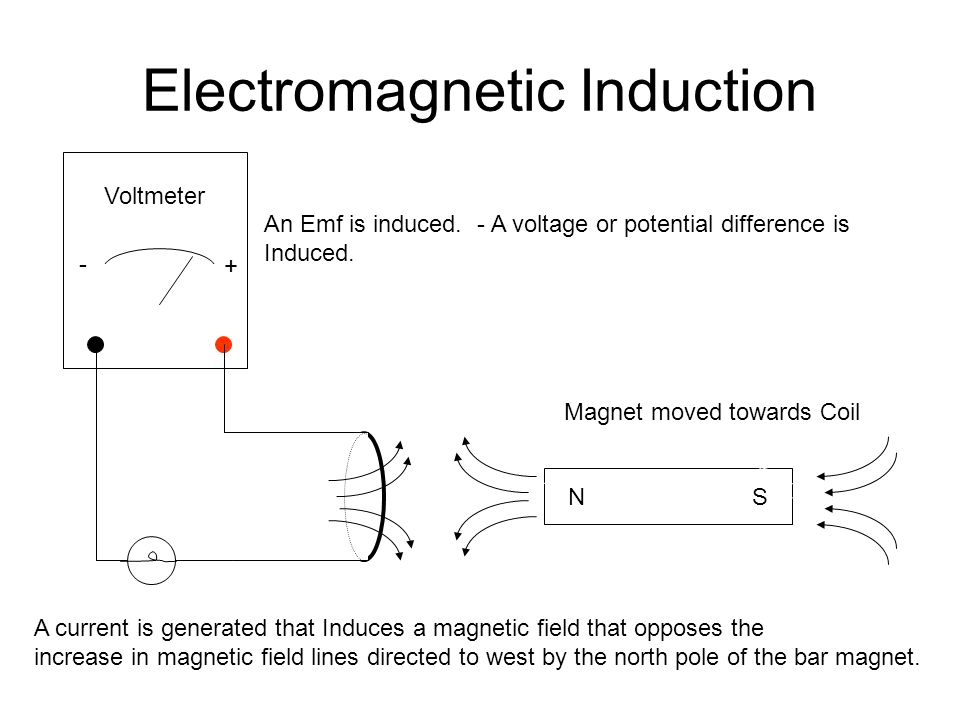 Likewise, if the magnet is now held stationary and ONLY the coil is moved towards or away from the magnet the needle of the galvanometer will also deflect in either direction. Then the action of moving a coil or loop of wire through a magnetic field induces a voltage in the coil with the magnitude of this induced voltage being proportional to the speed or velocity of the movement.

From the above description we can say that a relationship exists between an electrical voltage and a changing magnetic field to which Michael Faraday’s famous law of electromagnetic induction states: “that a voltage is induced in a circuit whenever relative motion exists between a conductor and a magnetic field and that the magnitude of this voltage is proportional to the rate of change of the flux”.

In other words, Electromagnetic Induction is the process of using magnetic fields to produce voltage, and in a closed circuit, a current.

So how much voltage (emf) can be induced into the coil using just magnetism. Well this is determined by the following 3 different factors.

If we were able to move the magnet in the diagram above in and out of the coil at a constant speed and distance without stopping we would generate a continuously induced voltage that would alternate between one positive polarity and a negative polarity producing an alternating or AC output voltage and this is the basic principle of how an electrical generator works similar to those used in dynamos and car alternators.

In small generators such as a bicycle dynamo, a small permanent magnet is rotated by the action of the bicycle wheel inside a fixed coil. Alternatively, an electromagnet powered by a fixed DC voltage can be made to rotate inside a fixed coil, such as in large power generators producing in both cases an alternating current. 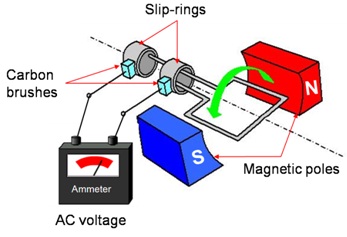 The simple dynamo type generator above consists of a permanent magnet which rotates around a central shaft with a coil of wire placed next to this rotating magnetic field. As the magnet spins, the magnetic field around the top and bottom of the coil constantly changes between a north and a south pole. This rotational movement of the magnetic field results in an alternating emf being induced into the coil as defined by Faraday’s law of electromagnetic induction.

The magnitude of the electromagnetic induction is directly proportional to the flux density, β the number of loops giving a total length of the conductor, l in meters and the rate or velocity, ν at which the magnetic field changes within the conductor in meters/second or m/s, giving by the motional emf expression:

If the conductor does not move at right angles (90°) to the magnetic field then the angle θ° will be added to the above expression giving a reduced output as the angle increases:

Lenz’s law is one of the basic laws in electromagnetic induction for determining the direction of flow of induced currents and is related to the law of conservation of energy.

According to the law of conservation of energy which states that the total amount of energy in the universe will always remain constant as energy can not be created nor destroyed. Lenz’s law is derived from Michael Faraday’s law of induction.

One final comment about Lenz’s Law regarding electromagnetic induction. We now know that when a relative motion exists between a conductor and a magnetic field, an emf is induced within the conductor.

Eddy currents generated by electromagnetic induction circulate around the coils core or any connecting metallic components inside the magnetic field because for the magnetic flux they are acting like a single loop of wire. Eddy currents do not contribute anything towards the usefulness of the system but instead they oppose the flow of the induced current by acting like a negative force generating resistive heating and power loss within the core. However, there are electromagnetic induction furnace applications in which only eddy currents are used to heat and melt ferromagnetic metals.

Eddy Currents Circulating in a Transformer 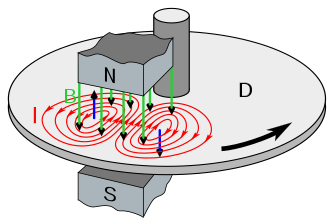 Eddy current and hysteresis losses can not be eliminated completely, but they can be greatly reduced. Instead of having a solid iron core as the magnetic core material of the transformer or coil, the magnetic path is “laminated”.

These laminations are very thin strips of insulated (usually with varnish) metal joined together to produce a solid core. The laminations increase the resistance of the iron-core thereby increasing the overall resistance to the flow of the eddy currents, so the induced eddy current power-loss in the core is reduced, and it is for this reason why the magnetic iron circuit of transformers and electrical machines are all laminated.