This unit dwells on how the eco system works

Ecology is the study of inter-relationships between organisms and their environment. Its aim it to explain why organisms live where they do. To do this ecologists study ecosystems, areas that can vary in size from a pond to the whole planet.

One of the most fundamental problems faced by community and population ecologists is that of measuring population sizes and distributions. The data is important for comparing differences between communities and species.  It is necessary for impact assessments (measuring effects of disturbance) and restoration ecology (restoring ecological systems).  It is also used to set harvest limits on commercial and game species (e.g. fish, deer, etc.).

In most cases it is either difficult or simply not possible to census all of the individuals in the target area.  The only way around this problem is to estimate population size using some form of sampling technique.  There are numerous types of sampling techniques.  Some are designed for specific types of organisms (e.g. plants vs. mobile animals).  As well there are numerous ways of arriving at estimates from each sampling technique.  All of these procedures have advantages and disadvantages.  In general, the accuracy of an estimate depends on 1) the number of samples taken, 2) the method of collecting the samples, 3) the proportion of the total population sampled.

Sampling is viewed by statistical ecologists as a science in its own right.  In most cases, the object is to collect as many randomly selected samples as possible (so as to increase the proportion of the total population sampled).  The accuracy of an estimate increases with the number of samples taken.  This is because the number of individuals found in any given sample will vary from the number found in other samples.  By collecting numerous samples, the effect of these variations can be averaged out.  The purpose for collecting the samples randomly is to avoid biasing the data.  Data can become biased when individuals of some species are sampled more frequently, or less frequently, than expected at random.  Such biases can cause the population size to be either over estimated or under estimated, and can lead to erroneous estimates of population size.

Population size generally refers to the number of individuals present in the population, and is self-explanatory.  Density refers to the number of individuals in a given area.  For ecologists density is usually a more useful measure.  This is because density is standardized per unit area, and therefore, can be correlated with environmental factors or used to compare different populations.

Communities are assemblages of many species living in a common environment.  Interactions between species can have profound influences of their distributions and abundances.  Comprehensive understanding of how species interact can contribute to understanding how the community is organized.  One way to look at species interactions is to evaluate the level of association between them.  Two species are said to be positively associated if they are found together more often than expected by chance.  Positive associations can be expected if the species share similar microhabitat needs or if the association provides some benefit to one (commensualisms) or both (mutualism) of the species involved.  Two species are negatively associated if they are found together less frequently than expected by chance.  Such a situation can arise if the species have very different microhabitat requirements, or if one species, in some way, inhibits the other.  For example, some plants practice allelopathy, the production and release of chemicals that inhibit the growth of other plant species.  Allelopathy results in a negative association between the allelopathic species and those species whose growth is inhibited.

The quadrat method is used primarily in studies of plant populations, or where animals are immobile.  The principal assumptions of this technique are that the quadrats are chosen randomly, the organisms do not move from one quadrat to another during the census period, and that the samples taken are representative of the population as a whole.  It is often conducted by dividing the census area into a grid.  Each square within the grid is known as a quadrat and represents the sample unit. Quadrats are chosen at random by using a random number generator or a random number table to select coordinates.  The number of individuals of the target species is then counted in each of the chosen quadrats.

This method of sampling is most useful when dealing with an animal population that moves around.  Ecologists must always ensure minimum disturbance of the organism if results are to be truly representative and that the population will behave as normal.   In this method individual organisms are captured, unharmed, using a quantitative technique.  They are counted and then discretely marked or tagged in some way, and then released back into the environment. After leaving time for dispersal, the population is then recaptured, and another count is made.  This gives the number of marked animals and the number unmarked.   This can allow ecologists to estimate of the entire population in a given habitat.

An index of diversity is used as a measure of the range and numbers of species in an area.  It usually takes into account the number of species present and the number of individuals of each species.  It can be calculated by the following formulae: 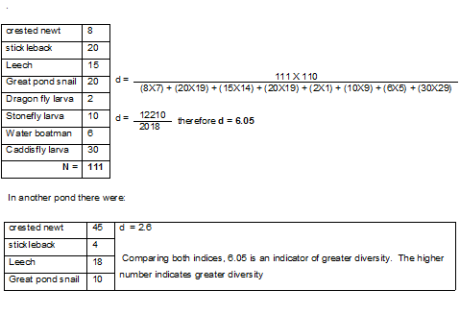 In extreme environments the diversity of organisms is usually low (has a low index number).  This may result in an unstable ecosystem in which populations are usually dominated by abiotic factors.  The abiotic factor(s) are extreme and few species have adaptations allowing them to survive.  Therefore food webs are relatively simple, with few food chains, or connections between them – because few producers survive.  This can produce an unstable ecosystem because a change in the population of one species can cause big changes in populations of other species.

In less hostile environments the diversity of organisms is usually high (high index number).  This may result in a stable ecosystem in which populations are usually dominated by biotic factors, and abiotic factors are not extreme.  Many species have adaptations that allow them to survive, including many plants/producers.  Therefore food webs are complex, with many inter-connected food chains.  This results in a stable ecosystem because if the population of one species changes, there are alternative food sources for populations of other species.
Population Ecology

Population Ecology is concerned with the question: why is a population the size it is? This means understanding the various factors that affect the population.

When a species is introduced into a new environment its population grows in a characteristic way. This growth curve is often seen experimentally, for example bees in a hive, sheep in Tasmania, bacteria in culture. The curve is called a logistic or sigmoid growth curve.

The growth curve has three phases, with different factors being responsible for the shape of each phase. The actual factors depend on the ecosystem, and this can be illustrated by considering two contrasting examples: yeast in a flask (reproducing asexually), and rabbits in a field (reproducing sexually).

At the end of phase 3 the population is stable. This population is called the carrying capacity of the environment (K), and is the maximum population supported by a particular ecosystem.

Many abiotic factors vary with the seasons, and this can cause a periodic oscillation in the population size.

This is only seen in species with a short life cycle compared to the seasons, such as insects. Species with long life cycles (longer than a year) do not change with the seasons like this

Interspecific competition is competition for resources (such as food, space, water, light, etc.) between members of different species, and in general one species will out-compete another one. This can be demonstrated by growing two different species of the protozoan Paramecium in flasks in a lab. They both grow well in lab flasks when grown separately, but when grown together P.aurelia out-competes P.caudatum for food, so the population of P.caudatum falls due to interspecific competition:

Intraspecific competition is also the driving force behind natural selection, since the individuals with the “best” genes are more likely to win the competition and pass on their genes. Some species use aggressive behaviour to minimise real competition. Ritual fights, displays, threat postures are used to allow some individuals (the “best”) to reproduce and exclude others (the “weakest”). This avoids real fights or shortages, and results in an optimum size for a population.

The populations of predators and their prey depend on each other, so they tend to show cyclical changes. This has been famously measured for populations of lynx (predator) and hare (prey) in Canada, and can also be demonstrated in a lab experiment using two species of mite: Eotetranchus (a herbivore) and Typhlodromus (a predator). If the population of the prey increases, the predator will have more food, so its population will start to increase. This means that more prey will be eaten, so its population will decrease, so causing a cycle in both populations:

A population’s niche refers to its role in its ecosystem. This usually means its feeding role in the food chain, so a particular population’s niche could be a producer, a predator, a parasite, a leaf-eater, etc. A more detailed description of a niche should really include many different aspects such as its food, its habitat, its reproduction method etc, so gerbils are desert seed-eating mammals; seaweed is an inter-tidal autotroph; fungi are asexual soil-living saprophytes. Identifying the different niches in an ecosystem helps us to understand the interactions between populations. Members of the same population always have the same niche, and will be well-adapted to that niche, e.g. nectar feeding birds have long thin beaks. 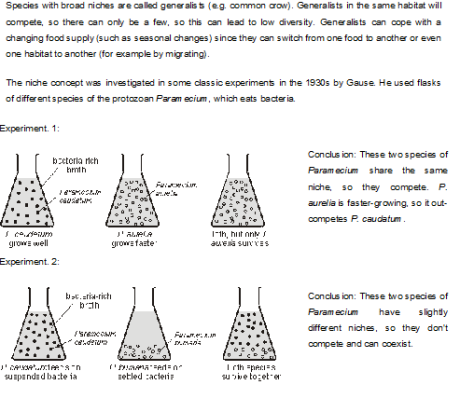 The niche concept is summarised in the competitive exclusion principle: Two species cannot coexist in the same habitat if they have the same niche.
Succession

Ecosystems are not fixed, but constantly change with time. This change is called succession. Imagine a lifeless area of bare rock. What will happen to it as time passes?

2.       Pioneer species such as grasses and ferns grow in the thin soil and their roots accelerate soil formation. They have a larger photosynthetic area, so they grow faster, so they make more detritus, so they form better soil, which holds more water.

These stages are called seral stages, or seral communities, and the whole succession is called a sere. Each organism modifies the environment, so creating opportunities for other species. As the succession proceeds the community becomes more diverse, with more complex food webs being supported. The final seral stage is stable (assuming the environment doesn’t change), so succession stops at the climax stage. In England the natural climax community is oak or beech woodland (depending on the underlying rock), and in the highlands of Scotland it is pine forests. In Roman times the country was covered in oak and beech woodlands with herbivores such as deer, omnivores such as bear and carnivores such as wolves and lynxes. It was said that a squirrel could travel from coast to coast without touching ground.

Humans interfere with succession, and have done so since Neolithic times, so in the UK there are few examples of a natural climax left (except perhaps small areas of the Caledonian pine forest in the Scottish Highlands). Common landscapes today like farmland, grassland, moorland and gardens are all maintained at pre-climax stages by constant human interventions, including ploughing, weeding, herbicides, burning, crop planting and grazing animals. These are examples of an artificial climax, or plagioclimax.

Secondary succession starts with soil, but no (or only a few) species, such as in a forest clearing, following a forest fire, or when soil is deposited by a meandering river.