This Unit is about the frequently asked questions in Economics and also the PFF curve.

In an economy, these are the questions that individuals/ firms have to deal with in making decisions. They arise from the fundamental economic questions of scarcity, choice and opportunity. They include:

When to produce or consume

Producers mainly produce more in periods of high and increasing demand but may postpone production when current demand is very low but is expected to be high in the future.

Consumers also decide when to consume, now or in future depending on the rate of time preference.

This is the question that refers to the location of the production unit/land. Producers usually take decisions on whether locate their enterprise near market or the source of raw materials. Generally firms are located where the cost of production is lowest.

For whom to produce

This is the targeted consumers of goods and services that are produced by a firm. In capitalist economies, production is aimed as satisfying the rich who can pay high taxes and the producers get profits but in command economies, the state directs production for the benefit of all individuals in the country.

The PPF curve is a locus of points or a curve which shows alternative combinations of two commodities that can be produced by a country or firm when all existing resources are maximally and efficiently used in a given state of technology.

PPF SCHEDULE OF A AGAINST B 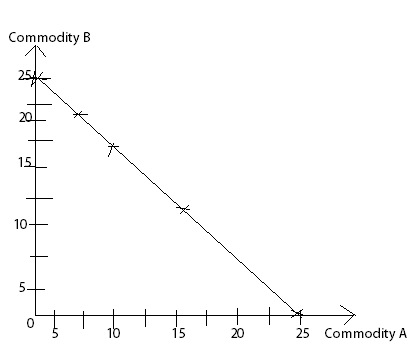 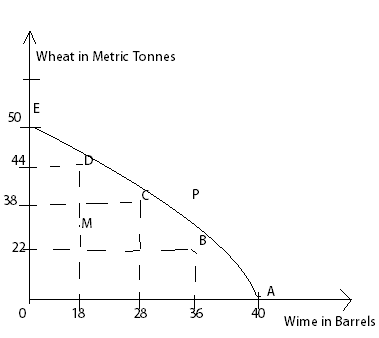 A conventional PPF curve should show the relationship between the two commodities produced and is concave in nature.

This brings in the idea of the marginal rate of transformation which shows how much of one commodity must be given up in order to increase the production of one commodity by an additional unit.

It shows that combinations outside the PPF indicated by ‘’p’’ are not attainable in existing resources and technology.

It also shows that combinations inside the PPF shown by M imply inefficient use of resources.

Only the points on the curve as shown by the PPF curve EDCD indicate efficient use of resources.

ASSUMPTION ON WHICH THE PPF CONCEPT WAS FORMULATED.

+USES OF THE PPF

THE PPF AND ECONOMIC GROWTH 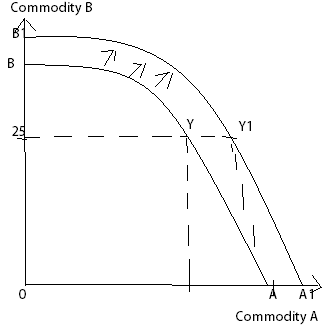 The out ward bodily shift of the PPF from AB to A, B, indicates economic growth which is the increase.

THE PPF SHIFTS OUTWARDS UNDER THE FOLLOWING CIRCUMSTANCES 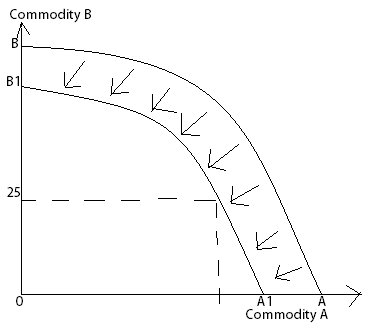 This situation may occur when there is depletion/ exhaustion in resource

THIS VIDEO EXPLAINS MORE ABOUT THE PPF CURVE.