In Local Area Networks, we are interested in “connectivity”, connecting computers together to share resources. Even though the computers can have different disk operating systems, languages, cabling and locations, they still can communicate to one another and share resources.

At the end of 1996, there was a major milestone where more data was communicated in North America’s telecommunications system than voice. Currently, in 2005, the majority of communication on telephony circuits is data and the minority is voice. This doesn’t mean that the voice traffic is reducing in volume, it means that the data communications side has added a whole new dimension to telephony. In addition, there is even more voice communications now due to the explosion of use of cellular phones.

There are two main methods of sending data over telephone services: voice channels and data channels.

First thing that comes to mind when discussing telephone systems, is the phone at home. The dialup phone is called the Plain Old Telephone Set or System and uses the acronym POTS. A voice conversation using a POTS line uses the most basic of telephony services: the Voice Channel. This initially doesn’t seem to have much to do with Networks!

Data channels are dedicated lines for communicating digitized voice and data. There are many different protocols (rules and standards) for data channels. Some common data channel services are T-1 lines, Frame Relay, X.25 and ADSL.

Data Channels are special communications channels provided by the “common carriers” such as Telus, Sprint, Bell Canada, etc… for transferring digital data. Data Channels are also called “Leased Lines”. They are “directly” connected and you don’t have to dial a connection number. The connections are up and running 24 hours per day. They appear as if there were a wire running directly between the source and destination. Typical transfer rates for data communication are: 56 k, 128k, 1.544 M, 2.08 M, 45M and 155 Mbps. 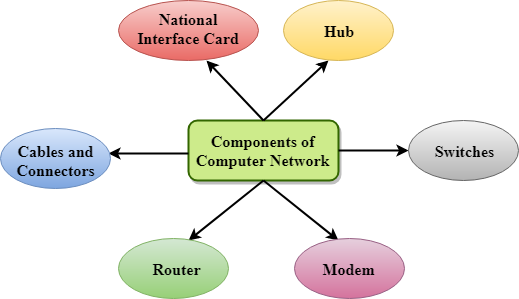 Major components of a computer network are:

NIC is a device that helps the computer to communicate with another device. The network interface card contains the hardware addresses, the data-link layer protocol use this address to identify the system on the network so that it transfers the data to the correct destination.

There are two types of NIC: wireless NIC and wired NIC.

Hub is a central device that splits the network connection into multiple devices. When computer requests for information from a computer, it sends the request to the Hub. Hub distributes this request to all the interconnected computers.

Cable is a transmission media that transmits the communication signals. There are three types of cables: