This unit explains Introduction to Computer

A computer is an electronic device, operating under the control of instructions stored in its own memory that can accept data (input), process the data according to specified rules, produce information (output), and store the information for future use.

Functionalities of a computer

Any digital computer carries out five functions in gross terms:

Any kind of computers consists of HARDWARE AND SOFTWARE.

Computer hardware is the collection of physical elements that constitutes a computer system. Computer hardware refers to the physical parts or components of a computer such as the monitor, mouse, keyboard, computer data storage, hard drive disk (HDD), system unit (graphic cards, sound cards, memory, motherboard and chips), etc. all of which are physical objects that can be touched.

Input device is any peripheral (piece of computer hardware equipment to provide data and control signals to an information processing system such as a computer or other information appliance. Input device Translate data from form that humans understand to one that the computer can work with. Most common are keyboard and mouse. 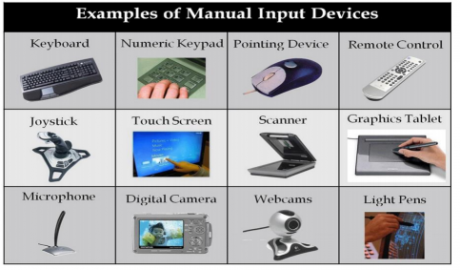 A CPU is brain of a computer. It is responsible for all functions and processes. Regarding computing power, the CPU is the most important element of a computer system.

The CPU is comprised of three main parts:

*Registers: Stores the data that is to be executed next, “very fast storage area”.

Stores data and programs permanently: its retained after the power is turned off.

A storage module made of flash memory chips. A Flash disk have no mechanical platters or access arms, but the term “disk” is used because the data are accessed as if they were on a hard drive. The disk storage structure is emulated.

An output device is any piece of computer hardware equipment used to communicate the results of data processing carried out by an information processing system (such as a computer) which converts the electronically generated information into human readable form.

Software is a generic term for organized collections of computer data and instructions, often broken into two major categories: system software that provides the basic nontask-specific functions of the computer, and application software which is used by users to accomplish specific tasks.

Storage measurements: The basic unit used in computer data storage is called a bit (binary digit). Computers use these little bits, which are composed of ones and zeros, to do things and talk to other computers. All your files, for instance, are kept in the computer as binary files and translated into words and pictures by the software (which is also ones and zeros). This two number system, is called a “binary number system” since it has only two numbers in it. The decimal number system in contrast has ten unique digits, zero through nine.

Speed measurement: The speed of Central Processing Unit (CPU) is measured by Hertz (Hz), Which represent a CPU cycle. The speed of CPU is known as Computer Speed.

Computers can be generally classified by size and power as follows, though there is Considerable overlap:

LAPTOP: A laptop is a battery or AC-powered personal computer that can be easily carried and used in a variety of locations. Many laptops are designed to have all of the functionality of a desktop computer, which means they can generally run the same software and open the same types of files. However, some laptops, such as netbooks, sacrifice some functionality in order to be even more portable.

Netbook: A netbook is a type of laptop that is designed to be even more portable. Netbooks are often cheaper than laptops or desktops. They are generally less powerful than other types of computers, but they provide enough power for email and internet access, which is where the name “netbook” comes from.

Mobile Device: A mobile device is basically any handheld computer. It is designed to be extremely portable, often fitting in the palm of your hand or in your pocket. Some mobile devices are more powerful, and they allow you to do many of the same things you can do with a desktop or laptop computer. These include tablet computers, e-readers, and smartphones.

Tablet Computers: Like laptops, tablet computers are designed to be portable. However, they provide a very different computing experience. The most obvious difference is that tablet computers don’t have keyboards or touchpads. Instead, the entire screen is touch-sensitive, allowing you to type on a virtual keyboard and use your finger as a mouse pointer. Tablet computers are mostly designed for consuming media, and they are optimized for tasks like web browsing, watching videos, reading e-books, and playing games. For many people, a “regular” computer like a desktop or laptop is still needed in order to use some programs. However, the convenience of a tablet computer means that it may be ideal as a second computer.

Smartphones: A smartphone is a powerful mobile phone that is designed to run a variety of applications in addition to phone service. They are basically small tablet computers, and they can be used for web browsing, watching videos, reading e-books, playing games and more.

Data: Facts and figures which relay something specific, but which are not organized in any way and which provide no further information regarding patterns, context, etc. So data means “unstructured facts and figures that have the least impact on the typical manager.”

Information: For data to become information, it must be contextualized, categorized, calculated and condensed. Information thus paints a bigger picture; it is data with relevance and purpose. It may convey a trend in the environment, or perhaps indicate a pattern of sales for a given period of time. Essentially information is found “in answers to questions that begin with such words as who, what, where, when, and how many”.

Knowledge: Knowledge is closely linked to doing and implies know-how and understanding. The knowledge possessed by each individual is a product of his experience, and encompasses the norms by which he evaluates new inputs from his surroundings.

The content of the human mind can be classified into four categories:

We need to understand that processing data produced Information and process Information produces Knowledge and so on.

Computer cannot do any work without instructions from the user. It executes instructions as specified by the user and does not take its own decisions.

Viruses: A virus is a small piece of software that piggybacks on real programs. For example, a virus might attach itself to a program such as a spreadsheet program. Each time the spreadsheet program runs, the virus runs, too, and it has the chance to reproduce (by attaching to other programs) or wreak havoc.

What are some tips to avoid viruses and lessen their impact?

A VIDEO BELOW EXPLAINS THE INTRODUCTORY PART OF COMPUTER