Introduction to the Internet

The Internet is a worldwide system of interconnected computer networks. The computers and computer networks exchange information using TCP/IP (Transmission Control Protocol/Internet Protocol) to communicate with each other. The computers are connected via the telecommunications networks, and the Internet can be used for e-mailing, transferring files and accessing information on the World Wide Web.

The World Wide Web is a system of Internet servers that use HTTP (Hypertext Transfer Protocol) to transfer documents formatted in HTML (Hypertext Mark-up Language). These are viewed by using software for web browsers such as Netscape, Safari, Google Chrome and Internet Explorer. Hypertext enables a document to be connected to other documents on the web through hyperlinks. It is possible to move from one document to another by using hyperlinked text found within web pages.

Communication is becoming much easier than before due to the appearance of Internet. One of the conveniences is that messages, in the forms of email, can be sent at any corner of the world within fractions of seconds. Besides that, email also facilitated mass communication which means that one sender reaches many receivers. Some of the services made available due to Internet include video conferencing, live telecast, music, news, e-commerce, etc.theese communication network are widely used across the globe.

Three principal uses of the Internet are:

The rapid development of Internet started at the early 1960, paralleled with the developments of the computers. Those scientists and researcher started to realize a great vision, a future that everyone will be able to communicate by using their computers. J.C.R. Licklider of MIT, first proposed a global network of computers in 1962 and followed by Leonard Kleinrock from MIT, who published the first paper on packet switching theory.

ARPANET, which is the former of Internet, was a project launched by Military Department of USA. It was brought online at Oct 29, 1969 by Charley Kline at UCLA, when he attempted to perform a remote login from UCLA to SRI. In order to get attentions from public, they made the first public demonstration of ARPANET at an international conference at October 1972.

The initial ARPANET was a single,closed network. In order to communicate with an ARPANET, one had to be attached to another ARPANET IMP (interface message processor). Hence, the disadvantages of single network were realized and lead the development of open-architecture network and also different protocols of internetworking, which enable multiple networks, can be joined together. E-mail was adapted for ARPANET by Ray Tomlinson of BBN in 1972. The telnet protocol, enabling logging on to a remote computer, was published as a Request for Comments (RFC) in 1972. RFC’s are a means of sharing developmental work throughout community. The FTP protocol, enabling file transfers between Internet sites, was published as an RFC in 1973, and from then on RFC’s were available electronically to anyone who had use of the FTP protocol.

Before the TCP/IP protocol was introduced by BoB Kahn, the networking protocols used for the ARPANET was NCP, Network Control Protocols. NCP did not have the ability to address networks further downstream than a destination IMP on ARPANET. By 1980, the Internet had reached a certain level of maturity and started to exposed to public usage more and more often. At the same time, French launched the Minitel project to bring data networking into everyone’s home by gave away a free terminal to each household requested.

At the 1990s, the Internet predecessor, ARPANET finally came to an end, and replaced by the NSFNET which serve as a backbone connecting regional networks in USA. However, the most significant changes of Internet at 1990s was the World Wide Web (WWW) application which truly brought Internet to our daily life. Various technologies such as VoIP, HTML, web browsers with graphical user interfaces, P2P file sharing, instant messaging which is very familiar to us nowadays.

How can Internet be explored?

To access the Internet, you’ll need a personal computer, a modem (or direct link to a network), telecommunications software, a telephone line, and an Internet account. Don’t worry–this is easier than it sounds, but it still helps when you’re getting started to have a few good books on the subject, or better yet, a friend who’s an experienced “cyber surfer.” Many universities provide Internet accounts to their faculty and students at little or no cost. Commercial vendors will provide Internet service for a fee. Make sure that you access your Internet provider with a local telephone call–otherwise, long distance charges will apply.

The easiest way for new users to navigate the Internet may be through the “gopher,” a navigational system that uses a series of menus to organize and provide access to information. Unfortunately, “gopher,” while easy to use, provides text-only information. It is much more rewarding to take full advantage of the multimedia opportunities available on the World-Wide Web (WWW). This system organizes information to provide for linkages to related documents (hypertext links), which allow users to move quickly and easily to related documents.

THIS VIDEO EXPLAINS THE INTRODUCTION TO INTERNET

Internet Services allows us to access huge amount of information such as text, graphics, sound and software over the internet. Following diagram shows the four different categories of Internet Services.

There are various Communication Services available that offer exchange of information with individuals or groups. The following table gives a brief introduction to these services:

There exist several Information retrieval services offering easy access to information present on the internet. The following table gives a brief introduction to these services:

The web services are offered using concept of Utility Computing.

WWW is also known as W3. It offers a way to access documents spread over the several servers over the internet. These documents may contain texts, graphics, audio, video, hyperlinks. The hyperlinks allow the users to navigate between the documents.

Video conferencing or Video teleconferencing is a method of communicating by two-way video and audio transmission with help of telecommunication technologies.

This mode of conferencing connects two locations only. 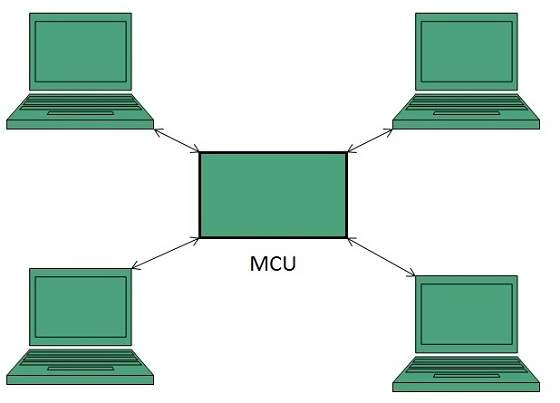 The World Wide Web (WWW) is combination of all resources and users on the Internet that are using the Hypertext Transfer Protocol (HTTP).

“The World Wide Web is the universe of network-accessible information, an embodiment of human knowledge.”

The Web, as it’s commonly known, is often confused with the internet. Although the two are intricately connected, they are different things. The internet is, as its name implies, a network — a vast, global network that incorporates a multitude of lesser networks. As such, the internet consists of supporting infrastructure and other technologies. In contrast, the Web is a communications model that, through HTTP, enables the exchange of information over the internet.

Tim Berners-Lee is the inventor of the Web and the director of the W3C, the organization that oversees its development. Berners-Lee developed hypertext, the method of instant cross-referencing that supports communications on the Web, making it easy to link content on one web page to content located elsewhere. The introduction of hypertext revolutionized the way people used the internet.

In 1989, Berners-Lee began work on the first World Wide Web server at CERN. He called the server “httpd” and dubbed the first client “WWW.” Originally, WWW was just a WYSIWYG hypertext browser/editor that ran in the NeXTStep environment.

By October of 1990, Tim had written the three fundamental technologies that remain the foundation of today’s web (and which you may have seen appear on parts of your web browser):

As the web began to grow, Tim realised that its true potential would only be unleashed if anyone, anywhere could use it without paying a fee or having to ask for permission.

The World Wide Web has been widely available since 1991.

The World Wide Web gained rapid acceptance with the creation of a Web browser called Mosaic, which was developed in the United States by Marc Andreessen and others at the National Center for Supercomputing Applications at the University of Illinois and was released in September 1993. Mosaic allowed people using the Web to use the same sort of “point-and-click” graphical manipulations that had been available in personal computers for some years.

In April 1994 Andreessen cofounded Netscape Communications Corporation, whose Netscape Navigator became the dominant Web browser soon after its release in December 1994. BookLink Technologies’ InternetWorks, the first browser with tabs, in which a user could visit another Web site without opening an entirely new window, debuted that same year. By the mid-1990s the World Wide Web had millions of active users.

The software giant Microsoft Corporation became interested in supporting Internet applications on personal computers and developed its own Web browser (based initially on Mosaic), Internet Explorer(IE), in 1995 as an add-on to the Windows 95 operating system. IE was integrated into the Windows operating system in 1996 (that is, it came “bundled” ready-to-use within the operating system of personal computers), which had the effect of reducing competition from other Internet browser manufacturers, such as Netscape. IE soon became the most popular Web browser.

Apple’s Safari was released in 2003 as the default browser on Macintosh personal computers and later on iPhones (2007) and iPads (2010). Safari 2.0 (2005) was the first browser with a privacy mode, Private Browsing, in which the application would not save Web sites in its history, downloaded files in its cache, or personal information entered on Web pages.

The first serious challenger to IE’s dominance was Mozilla’s Firefox, released in 2004 and designed to address issues with speed and security that had plagued IE. In 2008 Google launched Chrome, the first browser with isolated tabs, which meant that when one tab crashed, other tabs and the whole browser would still function. By 2013 Chrome had become the dominant browser, surpassing IE and Firefox in popularity. Microsoft discontinued IE and replaced it with Edge in 2015.

In the early 21st century, smartphones became more computer-like, and more-advanced services, such as Internet access, became possible. Web usage on smartphones steadily increased, and in 2016 it accounted for more than half of Web browsing.