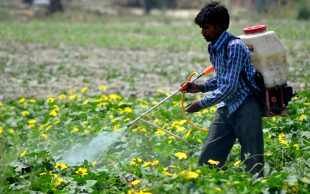 Crops are vulnerable to attack, damage, and competition. Insects, plant disease, nematodes, rodents, weeds, and air pollution are among the many enemies that can reduce crop yields and deny man the use of some of his farm-stored crops.

Insects, for example, can destroy a crop in a relatively short time. Control measures for many years have engaged the attention of farmer and scientist, yet full success has not been achieved, and the battle continues. The problem is further complicated by the fact that control measures not only kill unwanted insects, but also may harm honey bees as well as the parasites and predators that destroy insect pests.

At least 10,000 species of insects are classed as unwanted. Of these, several hundred species are particularly destructive and require some degree of control. They destroy food as well as the forage, pasture, and grain needed to produce livestock; and, in addition, they carry and transmit many diseases of plants and animals.

Insecticides generally are effective, cheap, and safe if handled correctly; the good derived from them, however, can be partly offset by adverse effects. Chlorinated hydrocarbon insecticides such as DDT, for example, may leave residues toxic to beneficial insects, fish, and other wildlife; the insecticides may be found in meat and milk, or they may persist in the soil. Another problem is that some species of insects build up resistance to chlorinated hydrocarbon, organic phosphate, and carbamate insecticides. These disadvantages can be overcome only by the persistent search for new and safer insecticides accompanied by a wide use of nonchemical insect control.

A wide range of organophosphate and carbamate materials is now available. These can be applied to avoid most of the problems related to residues. Malathion and carbaryl, for example, are used to control insects in areas where persistent materials might appear later in meat or milk and can also be applied in areas where fish and wildlife might be affected. Those two chemicals offer a broad range of toxicity to insect pests. Unlike chlorinated hydrocarbons, they can be applied up to within a day or so of harvest without harm to many crops; they are dangerous, however, to those who apply them and must be handled with care.

Some insecticides are effective in very small amounts. This fact has stimulated the development of ultralow-volume technology, where special equipment permits dispersal of low volumes of undiluted chemicals, which offers cost advantages as well as drastic reduction of the chemicals in the environment. For example, six to 16 ounces (170 to 450 grams) per acre of Malathion may be effective against grasshoppers, boll weevil, cereal-leaf beetle (Oulema melanopus), mosquitoes, and the beet leafhopper (Circulifer tenellus). Formulation of chemicals in granules rather than sprays offers some advantages in use and applications; among others, it reduces the amount needed and also lessens the chance of adverse effects on beneficial insects and wildlife.

Certain insects that attack cotton, vegetables, and forage crops may be controlled by chemicals absorbed by the plant. Called systemics, they are placed with the seed at planting time. The chemical is taken up by the plant, and insects die when they attempt to feed on the leaf or stem. Beneficial insects that do not feed on the plant remain unharmed.

Light traps that give off radiation that attracts insects have been under test for many years. They have been somewhat successful in controlling the codling moth (Carpocapsa pomonella) and the tobacco hornworm (Protoparce sexta).

Use of reflective aluminum strips, placed like mulch in vegetable fields, has reduced or prevented aphid attack and thus protected cucumbers, squash, and watermelons from mosaic diseases. This technique may supplant insecticides, which frequently do not kill aphids quickly enough to prevent crop losses from a virus transmitted by them. 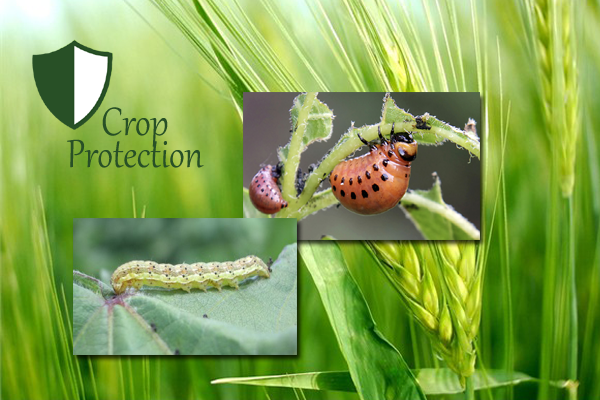 For stored products, heat or cold can control many insects that frequent such places. Also, changing the proportions of oxygen, nitrogen, and carbon dioxide in the storage atmosphere can provide control.

It has been discovered that, if adult Indian-meal moths (Plodia interpunctella) were exposed to certain wavelengths of sound during the egg-laying period, their reproduction was reduced by 75 percent. The sound waves had a similar effect on flour beetles (Tribolium species). Further development is needed, but this method offers potential as a nonchemical control. Other types of physical energy can also kill insects. Light waves, high-frequency electric fields, high-intensity radio frequencies, and gamma radiation have been investigated; some offer promise.

Certain cultural practices can prevent or reduce insect crop damage. These include the destruction of crop residues, deep ploughing, crop rotation, use of fertilizers, strip-cropping, irrigation, and scheduled planting operations. Such practices are useful but cannot be relied upon entirely to eliminate severe infestations.

The question of using biological controls has always been of considerable public interest. The control agents include parasites, predators, diseases, protozoa, and nematodes that attack the insect pests. Biological controls cannot replace insecticides entirely, because nature provides for the survival of both beneficial and destructive insects. Before the population of a parasite or predator can expand, a high population of the host species must also be present. Sometimes the control agents are far outnumbered by the pest insect. Parasites and predators have furnished good control of the Japanese beetle (Popillia japonica), European corn borer (Pyrausta nubilalis), alfalfa aphid (Therioaphis maculata), alfalfa weevil (Hypera postica), and several others.

Microbial agents can be used for control. There exist about 1,100 viruses, bacteria, fungi, protozoa, rickettsiae, and nematodes that parasitize insects. Many pathogens are specific to a particular insect but are harmless to man and domestic animals. It is a possibility that insect pathogens can be produced, packaged, distributed, and applied in much the same way as insecticides.

The ideal solution to insect-control problems is to plant crop varieties that are resistant to attack. The only difficulty is that such varieties are not universally available, and development entails a very long process.

Sterilization of male insects by gamma radiation and their release into a population of wild insects is a promising approach. It has proved successful in control of screwworms and fruit flies, replacing chemicals in some areas. Chemical attractants, which lure insects into contact with small amounts of insecticide or a sterilant, also offer much promise.

All aspects of insect control considered, it is possible that “integrated control,” coordinated employment of more than one method, maybe the answer. Combining resistant varieties with a systemic insecticide that leaves the parasites and predators unharmed, for example, has been successful in combatting the spotted alfalfa aphid in California. A preliminary reduction of heavy infestation by chemical spray combined with bait, followed by the sterile insect technique, provides another example of integrated control. Use of sex attractant in light traps, plus special management of postharvest residues, has controlled the tobacco hornworm. Other examples might be cited, but the principal value of such control methods lies in using less insecticide and thus contributing to maintenance of a good environment.

Control of plant diseases and nematodes

Insects, of course, are not the only agents hazardous to crops. Plant diseases and the microscopic worms called nematodes have the potential of creating wholesale destruction of crops, especially those grown in regions of wide weather fluctuation. In fact, these plant pests sometimes limit the kinds and varieties of crops that can be grown. The damage they cause may sometimes be mistaken for that caused by unfavourable weather. Epidemics may destroy crops completely.

As with insects, control of plant diseases and nematodes covers a broad spectrum of measures: use of chemicals, resistant varieties, quarantine, forecasting and warning, cultural practices, heat treatment, and others. Furthermore, most plant virus diseases are transmitted by insect carriers, so control of insects is linked to control of disease.

Nematodes and plant disease can at times be controlled fairly well by crop rotation, deep ploughing, and burning of stubble and debris that remain after harvest. Though burning destroys aboveground organisms and permits economical control by chemicals, it contributes to air pollution and destroys organic matter. In another technique, a propane-gas flame is applied to living plants as well as stubble to kill disease spores. A virus disease of sugarcane is controlled by heating diseased cuttings in hot-air ovens. Stem rot disease of peanuts (groundnuts) can be controlled by ploughing under dead plant debris or by planting the seed on a raised bed followed by application of a preemergence weed killer.

Successful control of epidemic plant disease may depend on the prompt application of chemicals before the disease outbreak. Many governments operate plant-disease forecasting and warning services for farmers. The service is based primarily on an analysis of temperature, rainfall, humidity, and dew—all factors that can create conditions favourable to disease outbreaks.

Early methods of weed control included mowing, flooding, cultivating, smothering, burning, and crop rotation. Though these methods are still important, other means are perhaps more typical today, particularly the use of herbicide (plant-killing) chemicals. Another technique is to introduce insects that attack only the unwanted plant and destroy it while leaving the crop plants unharmed.

The inadequacy of the cultural, mechanical, and biological control systems, however, stimulated the rapid development of chemical usage since World War II. Herbicides have had an impact on crop production, changing many cultural and mechanical agricultural operations.

Herbicides are formulated as wettable powders, granular materials, emulsions, and solutions. Any of them may be applied as a spot treatment, broadcast, placed in bands, or put directly on a specific plant part. When formulated as solutions or emulsions, the chemical is mixed with water or oil.

Spraying is the most common method, permitting extremely small amounts to be applied uniformly because of dilution. Sprays can be accurately directed underneath growing plants, and calibration and rate control are easier with spray machines than with granular applicators. Granular formulations have advantages under some conditions, however. The use of herbicides must be integrated into the overall farm program because the optimum date and application rate depend on the crop stage, the weed stage, weather conditions, and other factors.

Careful use of herbicides in farm production lowers cost, resulting in a more economical product for the consumer. Herbicides cut the costs of raising cotton, for example, by reducing labour requirements for weed control up to 60 percent. Herbicides replace hand labour in growing crops, labour that is no longer available in developed nations at costs the farmer can afford. Machines for chemical application are widely available.

When used as directed, herbicides are generally safe, not only for the operator but also for wildlife and livestock. The greatest difficulty lies in accidental injury to crop plants resulting from drift and from residues in the soil, particularly if residues enter watercourses.

The future of chemical pesticides and herbicides is under debate by those who manufacture, sell, and use them and by those who are concerned about environmental quality. The value of an assured food and fibre supply at a reasonable cost is undeniable, and chemicals contribute much toward this. These substances also cause undesirable effects upon the environment, however, and indeed can be toxic to a wide range of organisms. This fact will demand an increasing amount of care in using chemicals, perhaps enforced by law, along with the increasing use of nonchemical control techniques.