Agroforestry is a land use management system in which trees or shrubs are grown around or among crops or pastureland. This intentional combination of agriculture and forestry has varied benefits, including increased biodiversity and reduced erosion.Agroforestry practices have been successful in sub-Saharan Africa and in parts of the United States.

The theoretical base for agroforestry comes from ecology, via agroecology. From this perspective, agroforestry is one of the three principal agricultural land-use sciences. The other two are agriculture and forestry.

Agroforestry shares principles with intercropping. Both place two or more plant species (such as nitrogen-fixing plants) in close proximity and both provide multiple outputs. As a consequence, overall yields are higher and because a single application or input is shared, costs are reduced.

Agroforestry systems can be advantageous over conventional agricultural, and forest production methods. They can offer increased productivity, economic benefits, and more diversity in the ecological goods and services provided. (An example of this was seen in trying to conserve Milicia excelsa.)

Depending upon the application, positive impacts of agroforestry comprise different topics.

Biodiversity in agroforestry systems is typically higher than in conventional agricultural systems. Two or more interacting plant species in a given area create a more complex habitat that can support a wider variety of fauna.

Agroforestry is important for biodiversity for different reasons. It provides a more diverse habitat than a conventional agricultural system. Tropical bat and bird diversity for instance can be comparable to the diversity in natural forests. Although agroforestry systems do not provide as many floristic species as forests and do not show the same canopy height, they do provide food and nesting possibilities. A further contribution to biodiversity is that the germplasm of sensitive species can be preserved. As agroforests have no natural clear areas, habitats are more uniform. Furthermore, agroforests can serve as corridors between habitats. Agroforestry can help to conserve biodiversity by having a positive influence on other ecosystem services.

Depleted soils can be protected from soil erosion by groundcover plants such as naturally growing grasses in agroforestry systems. These help to stabilise the soil as they increase cover compared to short-cycle cropping systems. Soil cover is a crucial factor in preventing erosion. Cleaner water through reduced nutrient and soil surface runoff can be a further advantage of agroforestry. The runoff can be reduced by decreasing its velocity and increasing infiltration into the soil. Compared to row-cropped fields nutrient uptake can be higher and reduce nutrient loss into streams.

Carbon sequestration is an important ecosystem service. Trees in agroforestry systems, like in new forests, can recapture some of the carbon that was lost by cutting existing forests. They also provide additional food and products. The rotation age and the use of the resulting products are important factors controlling the amount of carbon sequestered. Agroforests can reduce pressure on primary forests by providing forest products.

Agroforestry practices may realize a number of associated environmental goals, such as:

Especially in recent years, poor smallholder farmers turned to agroforestry as a mean to adapt to climate change. A study from the CGIAR research program on Climate Change, Agriculture and Food Security (CCAFS) found from a survey of over 700 households in East Africa that at least 50% of those households had begun planting trees in a change from earlier practices. The trees were planted with fruit, tea, coffee, oil, fodder and medicinal products in addition to their usual harvest. Agroforestry was one of the most widespread adaptation strategies, along with the use of improved crop varieties and intercropping.

A well-studied example of an agroforestry hillside system is the Quesungual Slash and Mulch Agroforestry System (QSMAS) in Lempira Department, Honduras. This region was historically used for slash and burn subsistence agriculture. Due to heavy seasonal floods, the exposed soil was washed away, leaving infertile barren soil exposed to the dry season. Farmed hillside sites had to be abandoned after a few years and new forest was burned. The Food and Agriculture Organization of the United Nations (FAO) helped introduce a system incorporating local knowledge consisting of the following steps:

Parklands are visually defined by the presence of widely scattered trees . The trees are usually of a single species with regional favorites. The trees offer shade to grazing animals, protect crops against wind bursts, provide tree prunings for firewood, and host insect or rodent-eating birds.

Research with Faidherbia albida in Zambia showed that mature trees can sustain maize yields of 4.1 tonnes per hectare compared to 1.3 tonnes per hectare without these trees. Unlike other trees, Faidherbia sheds its nitrogen-rich leaves during the rainy crop-growing season so it does not compete with the crop. The leaves regrow during the dry season and provide land cover and shade for crops

With shade applications, crops are purposely raised under tree canopies within the shady environment. The understory crops are shade tolerant or the overstory trees have fairly open canopies. A conspicuous example is shade-grown coffee. This practice reduces weeding costs and improves coffee quality and taste. The shade does not necessarily translate into lost or reduced yields. This is because the rate of photosynthesis hardly increases once the light intensity is over about one tenth that of direct overhead sunlight and declines with increasing light intensity. This means that shaded plants can grow well. Planting more than one level of vegetation can increase total photosynthesis and overall yields.

Crop-over-tree systems employ woody perennials in the role of a cover crop. For this, small shrubs or trees pruned to near ground level are utilized. The purpose is to increase in-soil nutrients and/or to reduce soil erosion.

With alley cropping, crop strips alternate with rows of closely spaced tree or hedge species. Normally, the trees are pruned before planting the crop. The cut leafy material is spread over the crop area to provide nutrients. In addition to nutrients, the hedges serve as windbreaks and reduce erosion.

Alley cropping is advantageous in Africa, particularly in relation to improving maize yields in the sub-Saharan region. Use relies upon the nitrogen-fixing tree species Sesbania sesban, Euphorbia tricalii, Tephrosia vogelii, Gliricidia sepium and Faidherbia albida. In one example, a ten-year experiment in Malawi showed that, by using the fertilizer tree Gliricidia (Gliricidia sepium) on land on which no mineral fertilizer was applied, maize yields averaged 3.3 tonnes per hectare as compared to one tonne per hectare in plots without fertilizer trees or mineral fertilizers.

In tropical areas of North and South America, various species of Inga such as I. edulis and I. oerstediana have been used for alley cropping.

Silvopasture over the years (Australia)

Trees can benefit fauna. The most common examples are silvopasture where cattle, goats, or sheep browse on grasses grown under trees. In hot climates, the animals are less stressed and put on weight faster when grazing in a cooler, shaded environment. The leaves of trees or shrubs can also serve as fodder.

Similar systems support other fauna. Deer and hogsgain when living and feeding in a forest ecosystem, especially when the tree forage nourishes them. In aquaforestry, trees shade fish ponds. In many cases, the fish eat the leaves or fruit from the trees. 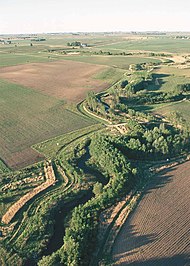 A riparian buffer bordering a river in Iowa

Multiple applications use a boundary system. These include living fences, riparian buffers, and windbreaks.

Taungya is a system originating in Burma. In the initial stages of an orchard or tree plantation, trees are small and widely spaced. The free space between the newly planted trees accommodates a seasonal crop. Instead of costly weeding, the underutilized area provides an additional output and income. More complex taungyas use between-tree space for multiple crops. The crops become more shade tolerant as the tree canopies grow and the amount of sunlight reaching the ground declines. Thinning can maintain sunlight levels.

Trellises are a relatively recent addition to agriculture. Earlier, grapes and other vine crops were grown atop pruned trees. Variations of the physical support theme depend upon the type of vine. The advantage is greater in-field biodiversity and control of weeds, diseases and insect pests.

Since the 1950s, 3/4 of Swiss orchards have disappeared. Increasing costs drove conversion to more intensive agriculture. Agroforestry there plants trees together with annual crops.

Crops include wheat, barley and grass.

Although, agroforestry systems can be advantageous compared to conventional agriculture/forestry, it is not widespread in the US as of November, 2013.

As suggested by a survey of extension programs in the United States, obstacles (ordered most critical to least critical) to agroforestry adoption include:

Some solutions to these obstacles have been suggested.

THIS VIDEO EXPLAINS MORE ABOUT AGRO-FORESTRY

USE THESE LINKS FOR MORE INFORMATION