CROP PRODUCTION I: Soil Fertility I

Soil fertility refers to the ability of a soil to sustain agricultural plant growth, i.e. to provide plant habitat and result in sustained and consistent yields of high quality. 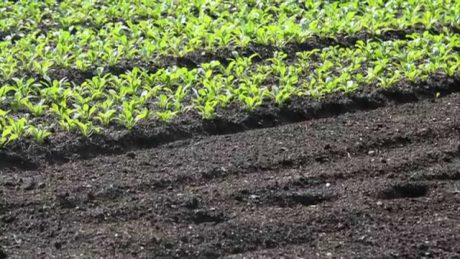 A fertile soil has the following properties:

The following properties contribute to soil fertility in most situations:

In lands used for agriculture and other human activities, maintenance of soil fertility typically requires the use of soil conservation practices. This is because soil erosion and other forms of soil degradation generally result in a decline in quality with respect to one or more of the aspects indicated above.

Soil scientists use the capital letters O, A, B, C, and E to identify the master horizons, and lowercase letters for distinctions of these horizons. Most soils have three major horizons—the surface horizon (A), the subsoil (B), and the substratum (C). Some soils have an organic horizon (O) on the surface, but this horizon can also be buried. The master horizon, E, is used for subsurface horizons that have a significant loss of minerals (eluviation). Hard bedrock, which is not soil, uses the letter R.

Bioavailable phosphorus is the element in soil that is most often lacking. Nitrogen and potassium are also needed in substantial amounts. For this reason these three elements are always identified on a commercial fertilizer analysis. For example, a 10-10-15 fertilizer has 10 percent nitrogen, 10 percent (P2O5) available phosphorus and 15 percent (K2O) water-soluble potassium. Sulfur is the fourth element that may be identified in a commercial analysis—e.g. 21-0-0-24 which would contain 21% nitrogen and 24% sulfate.

Soil fertility is a complex process that involves the constant cycling of nutrients between organic and inorganic forms. As plant material and animal wastes are decomposed by micro-organisms, they release inorganic nutrients to the soil solution, a process referred to as mineralization. Those nutrients may then undergo further transformations which may be aided or enabled by soil micro-organisms. Like plants, many micro-organisms require or preferentially use inorganic forms of nitrogen, phosphorus or potassium and will compete with plants for these nutrients, tying up the nutrients in microbial biomass, a process often called immobilization. The balance between immobilization and mineralization processes depends on the balance and availability of major nutrients and organic carbon to soil microorganisms. Natural processes such as lightning strikes may fix atmospheric nitrogen by converting it to (NO2). Denitrification may occur under anaerobic conditions (flooding) in the presence of denitrifying bacteria. Nutrient cations, including potassium and many micronutrients, are held in relatively strong bonds with the negatively charged portions of the soil in a process known as cation exchange.

Photosynthesis is the process whereby plants use light energy to drive chemical reactions which convert CO2 into sugars. As such, all plants require access to both light and carbon dioxide to produce energy, grow and reproduce.

While typically limited by nitrogen, phosphorus and potassium, low levels of carbon dioxide can also act as a limiting factor on plant growth. Peer-reviewed and published scientific studies have shown that increasing CO2 is highly effective at promoting plant growth up to levels over 300 ppm. Further increases in CO2 can, to a very small degree, continue to increase net photosynthetic output.

Soil depletion occurs when the components which contribute to fertility are removed and not replaced, and the conditions which support soil’s fertility are not maintained. This leads to poor crop yields. In agriculture, depletion can be due to excessively intense cultivation and inadequate soil management.

Soil fertility can be severely challenged when land use changes rapidly.

One of the most widespread occurrences of soil depletion is in tropical zones where nutrient content of soils is low. The combined effects of growing population densities, large-scale industrial logging, slash-and-burn agriculture and ranching, and other factors, have in some places depleted soils through rapid and almost total nutrient removal.

The depletion of soil has affected the state of plant life and crops in agriculture in many countries. In the middle east for example, many countries in that find it difficult to grow produce because of droughts, lack of soil, and lack of irrigation. Many countries in Africa also undergo a depletion of fertile soil. In regions of dry climate like Sudan and the countries that make up the Sahara Desert, droughts and soil degradation is common. Cash crops such as teas, maize, and beans that require a variety of nutrients in order to grow healthy. Soil fertility has decline in the farming regions of Africa and the use of artificial and natural fertilizers has been used to regain the nutrients of ground soil.

Topsoil depletion occurs when the nutrient-rich organic topsoil, which takes hundreds to thousands of years to build up under natural conditions, is eroded or depleted of its original organic material. Historically, many past civilizations’ collapses can be attributed to the depletion of the topsoil.

Depletion may occur through a variety of other effects, including overtillage (which damages soil structure), underuse of nutrient inputs which leads to mining of the soil nutrient bank, and salinization of soil.

The quality of irrigation water is very important to maintain soil fertility and tilth, and for using more soil depth by the plants. When soil is irrigated with high alkaline water, unwanted sodium salts build up in the soil which would make soil draining capacity very poor. So plant roots can not penetrate deep into the soil for optimum growth in Alkali soils. When soil is irrigated with low pH / acidic water, the useful salts ( Ca, Mg, K, P, S, etc.) are removed by draining water from the acidic soil and in addition unwanted aluminium and manganese salts to the plants are dissolved from the soil impeding plant growth. When soil is irrigated with high salinity water or sufficient water is not draining out from the irrigated soil, the soil would convert into saline soil or lose its fertility. Saline water enhance the turgor pressure or osmotic pressure requirement which impedes the off take of water and nutrients by the plant roots.

Top soil loss takes place in alkali soils due to erosion by rain water surface flows or drainage as they form colloids (fine mud) in contact with water. Plants absorb water-soluble inorganic salts only from the soil for their growth. Soil as such does not lose fertility just by growing crops but it lose its fertility due to accumulation of unwanted and depletion of wanted inorganic salts from the soil by improper irrigation and acid rain water (quantity and quality of water). The fertility of many soils which are not suitable for plant growth can be enhanced many times gradually by providing adequate irrigation water of suitable quality and good drainage from the soil. 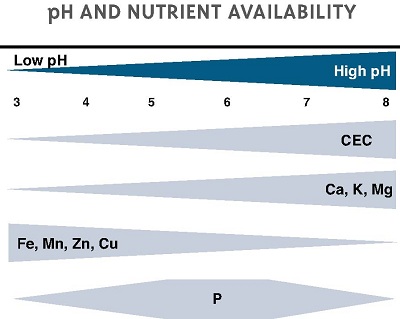 Soil scientists that focus on soil fertility are interested in managing nutrients to improve crop production.  They focus on using commercial fertilizers, manures, waste products, and composts to add nutrients and organic matter to the soil.  Sometime they also add chemicals that change the pH to a more optimum level for nutrient availability to plants.  Soil fertility experts must also be careful to ensure that practices are environmentally sustainable.  Inappropriate management of nutrients can lead to contamination of lakes, rivers, streams, and groundwater.  In addition, adding amendments to the soil is expensive and cuts into the profitability of farming operations, not to mention that toxic levels of nutrients can be as bad as or worse than too little nutrients for the plants. 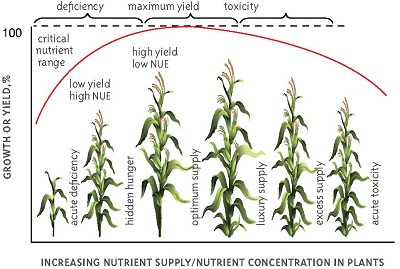 The goal of soil nutrient management is to sustainably produce profitable crops.  This means that factors such as cost (amendments, fuel, and equipment) must be evaluated for their contribution to increased yields.  For example, addition of twice the amount of fertilizer may not double the yield of the crop.  So, a farmer must determine if the cost of additional fertilizer will be repaid by the predicted additional yield.  Furthermore, the farmer must always be thinking about how inadequate or excessive management practices will affect the soil over time.  One of the major causes of erosion or soil loss is due to destruction of soil structure, which can be attributable to practices such as intensive tillage (soil mixing), excessive vehicular traffic, excessive removal of plant material (fallow fields), and depletion of soil nutrients, especially nitrogen.