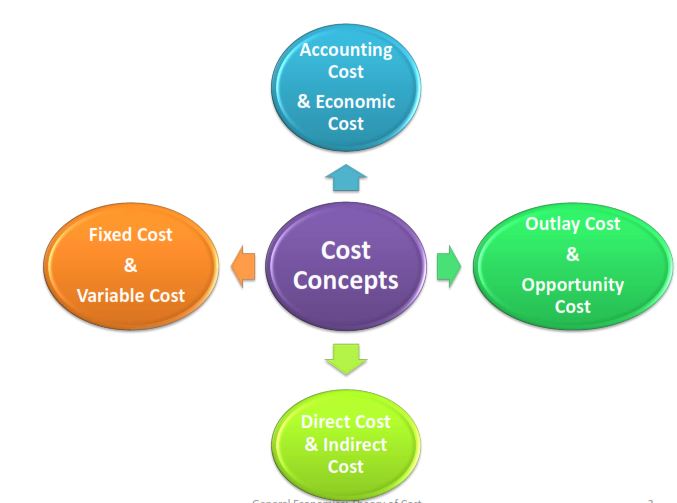 Fixed cost (FC): Fixed costs are those costs which do not change in magnitude as the amount of output produced changes and are incurred even when production is not undertaken. These are also called sunk costs. These could be fixed cash costs such as land taxes, interest, insurance premiums, permanently hired labour, etc. Non-cash fixed costs include depreciation on buildings, machinery interest on capital investment, cost of family labour & management, etc.

Variable costs (VC): The costs that are incurred on variable inputs and hence vary with the level of production are called variable costs. Higher the production more will be VC and vice-versa. Expenses on fertilizer, seed, chemical fuel consumption, etc.

Opportunity cost: Farm resources are limited but these can be put to different uses. When these are used in our product, some alternative usage is always forgone. The opportunity cost is the value of best alternative forgone.

Cost Function: Cost function (or TC curves) represents the functional relationship between output and total cost. That is what happens to cost structure when different quantities of a commodity are produced. The cost function can be represented by (i) arithmetically (tabular form), (ii) Geometrically or (iii) Algebraically. Exact nature (curvature) of cost function depends on the corresponding production function provided the prices for inputs do not change with the quality of inputs purchased.

Shape of TVC depends on shape of production function.

TC or AFC +AVC; shape of ATC depends upon shape of production function. ATC decreases as output increases, attains a minimum and increases thereafter. ATC is often referred to as ‘unit cost’ of production – the cost of producing the unit of output. The initial decrease in ATC is caused by the spreading of FC among an increasing number of units of output and the increasing efficiency with which the variable input is used. As output increases further, ATC attains a minimum & begins to increase, as increase in AVC can no longer be offset by decrease in AFC. ATC curve has the same slope as AVC. Difference is that the lowest point in case of AVC reaches earlier as compared to ATC.

Economic Principles applied to the Organization of Farm Business

In the short run, MC = MR point may be at a level of input use that may involve a loss instead of profit. Yet at this point loss will be minimized. This situation of operating the farms when MR is > AVC but < ATC is common in agriculture. This explains why farmers keep on doing farming even when they run into losses.

When resources are unlimited, farmer can produce all products under the rule,

But resources are limited, expansion of one enterprise requires contraction of other. The big question is which enterprise combination will give the greatest income? Such an optimum choice of enterprises is made based on the principle of equi-marginal return or the opportunity cost principle. Profit will be the greatest if each unit of labour, capital and land is used where it adds the most to the returns. In other words, this principle lays down: the best combination of enterprises or practices will be where limited resources are allocated in a manner that one cannot change the use of a simple unit without reducing the income. Thus, the resources should be used where they give not the highest average returns but the greatest marginal returns. Thus, the best combination of enterprises is obtained not when we select profitable crops but most profitable crops. The profitability of an enterprise depends on the price of the product, the direct costs attached to it & the amount of product sacrificed as one enterprise gets replaced with others. Budgeting & programming techniques take this principle into account for working out an optimum plan.

Example: A farmer has Rs 5000 to invest in crops, dairy or poultry. What amount of capital he should invest in each enterprise to get the highest profit?

Marginal Return to capital on these enterprises are;

The marginal return will however dictate spending as

When resources are limited and there is more than one enterprise where a farmer can invest. When recourses are used in one product some alternative is always forgone. The opportunity cost is the value of the next best alternative forgone. The value of one enterprise sacrificed is the cost of producing another enterprise. This principle thus refers to the advantages (returns) which might have been obtained from any factor if it had not been used in producing that commodity but would have been used for other next best purpose. Thus, it is the cost equivalent to the returns from the next best alternative forgone.

There are two types of investments: (1) Investments in operating inputs & (2) Investment on capital assets (land, farm building, machinery, equipment, etc). Analysis of these investments involves not only the comparison of costs and returns associated with it but also the timings of occurrence of costs & returns. The costs & returns from investments in operating resources occur with a production period of a year or less. The marginal principles are used to determine the optimum level of operating resources & there is no need to bring in time element here. But in the case of capital assets where the costs & returns are in different time periods and also capital expenditure involves costs & returns over time (orchards). Some expenditure may be recurring & some non- recurring. To examine the profitability of these investments it requires the recognition of time value of money. Money has time value for the following reasons.

Thus, farm management involves dynamic adjustments in the organization & operation of farm business by taking into account (a) time element in the valuation of the present value of future incomes by discounting future returns.

For discounting one needs to know the future & the capital position of the farmer. This implies the exact future income/cost should be known. The capital position of the farmer affects the interest rate to be used for discounting and the (b) risks & uncertainties in farm operations over time (natural calamities, price fluctuations, technical changes). Two aspects of the problem are considered under such situations: (a) Growth of a cash outlay over time i.e. compounding & (b) Discounting of future incomes.

For unlimited capital use market rate of interest. And for limited capital use the r that capital may fetch for the farmer. Law of diminishing returns applies to agriculture in general but its operation can be postponed under the following conditions: (i) Improved technology (2) New soils & (3) Scarcity of Capital (as on stage I) – all lead to the produce of increasing returns.

Reasons for the law of diminishing returns in agriculture: (1) Excessive dependence on weather, (2) less scope for division of labour, a farmer is the labour manager & capitalist (3) Less scope of machinery (4) cultivation of inferior/ marginal lands (5) Continuous cultivation leading to fertility loss.