The molecule of benzene is symmetrical and the six carbon atoms as well as the hydrogen atoms occupy similar positions in the molecule. If one atom of hydrogen is substituted by a monovalent group or a radical (say methyl group), the resulting monosubstitution product exists in one form only. The position assigned to the substituent group does not matter because of the equivalent positions of the six hydrogen atoms. Thus, we have only one compound having the formula C6H5X where X is some monovalent group.

Some examples of monosubstituted derivatives of benzene are given below: 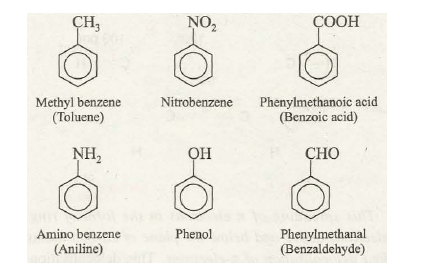 Chlorine or bromine react with benzene in the presence of Lewis acids like ferric or aluminium salts of the corresponding halogen, which act as catalysts. 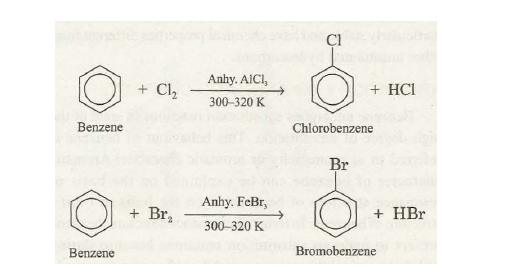 The replacement of hydrogen atom of benzene by a sulphonic acid group ( -SO3H) is known as sulphonation. The reaction is carried out by treating benzene with concentrated tetraoxosulphate (VI) acid containing dissolved sulphur(VI) oxide or with chlorosulphonic acid.

A nitro group ( – N02) can be introduced into a benzene ring using a nitrating mixture (a mixture of concentrated tetraoxosulphate(VI) acid and concentrated trioxonitrate(V) acid).

On treatment with an alkyl halide in the presence of Lewis acids, such as anhydrous aluminium chloride as catalyst, benzene forms an alkylbenzene.

This reaction is called Friedel-Craft’s alkylation.

1. The substituents or groups which direct the incoming group to ortho and para positions are called orlho and para directing groups. Some examples are:

For example, if we carry out nitration of toluene, the mixture of 2 and 4 nitrotoluene is formed

2. The substituents or groups which direct the incoming group to meta position are called meta directing groups. Some examples are:

Benzene and its homologues undergo some addition reactions characteristic of alkenes and alkynes, but under more drastic conditions (like higher temperature and pressure). This is due to the fact that these compounds are relatively more stable and behave like saturated hydrocarbons.

Benzene reacts with hydrogen in the presence of catalyst, nickel or platinum at 475-500 K or produce cyclohexane.

Arenes on combustion give carbon (IV) oxide and water, and large amount of heat is produced.

Aromatic hydrocarbons burn with sooty flame due to high carbon content of these compounds.

Among arenes, benzene is too stable to be oxidised even with hot KMnO4 solution. The higher homologues, however, can be oxidised. During this reaction, the ring remains intact but the side alkyl chain is oxidised to – COOH group irrespective of the length of the side chain. Some examples are: