CHEMICAL PROPERTIES AND USES OF AMINES

(i) Basic nature: It is more basic than ammonia. Following reactions prove its basic nature.

(a) It forms ethyl ammonium hydroxide when dissolved in water.

(b) It reacts with acids to form salts.

These double salts decompose on heating to pure metal and this method is used to determine the molecular mass of amines.

This reaction is used for the detection of primary amines.

(v) Reaction with sodium: Hydrogen is evolved when ethylamine is heated with sodium.

(vii) Hofmann’s mustard oil reaction: Carbon disulphide reacts with ethylamine in the presence of HgCl2 to form ethyl isothiocyanate which has a mustard oil like smell.

(viii) Reaction with aldehydes: Ethylamine reacts additively with aldehydes to form α-hydroxyl amines which are changed to Schiff bases with the elimination of water molecule.

But the diazonium ions of aliphatic amines are very unstable and produce carbocation immediately, which can produce different products. 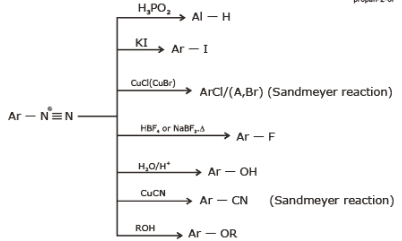 1. Halogenation: For monohalogenation, —NH2 is first acetylated, because

is only moderately activating and p-director in nature.

will not exist as a dipolar into since -COOH is too weakly acidic to transfer an H to the weakly basic -NH2 attached to the electron withdrawing benzene ring. When attached to an aliphatic C, the NH2 is sufficiently basic to accept H– from COOH.

(i) The Hinsberg Test

This test can be used to demonstrate whether an amine is primary, secondary or tertiary. Primary amines react with benzenesulfonyl chloride to form N-substituted benzenesulfonamides. These, in turn, undergo acid-base reactions with the excess potassium hydroxide to form water-soluble potassium salt. Acidification of this solution will, cause the water-soluble in the next stage, cause the water-insoluble N-substituted sulfonamide to precipitate.

Disubstituted sulfonamides do not dissolve in aqueous potassium hydroxide.

If the amine is a tertiary amine and if it is water-insoluble, no apparent change will take place in the mixture as we shake it with benzenesulfonyl chloride and aqueous KOH. When we acidify the mixture, the tertiary amine dissolves because it forms a water-soluble salt.