Are those which precede with the evolution of heat energy o the surroundings e.g. burning of substances like charcoal on the charcoal stove?

They involve a decrease in the energy content of the system i.e;-

These involve the absorption of heat energy from the surroundings. They are associated with a temperature fall. An endothermic reaction involves an increase in the energy content of the system i.e. the energy of products is greater than the energy of reactions.

Delta is always written in connection with a chemical equation representing the reaction to which the energy changes are associated.

Unless otherwise stated, the magnitude of delta it corresponds to mole reacting quantities as expressed in the equations of the reactions. By conversion, Δ H is given a negative sign in exothermic reactions and a positive sign for endothermic reactions.

Interpretation of the equations

When one mole of hydrogen gas reacts with ½ a mole of oxygen to give one mole of liquid water the heat liberated is 286 KJ.

When half a mole of Nitrogen gas combines with ½ sample of oxygen gas to give mole of nitrogen heat observed is 90.3KJ.

Is heat change measured under a standard condition of temp and pressure?

It is always negative (is, Ts exothermic and heat is always given off when burnt in oxygen.

The heat of combustion is an important quantity used for industrial and domestic sources of energy concerning burning material.

The heat of combustion is the heat change which taxes place when one-mole substance completely burns in oxygen among their quantities good fuel must burn to liberate a lot of heat energy per unit mass.

To measure the heat of precipitation of silver chloride

If 500 cm3 of each solution had been used, the temperature rise would still be t0c because the heat change is 20times greater than with only 25cm3 but there is 20 times more product to heat (however, heat losses to the plastic container and the air are not so important when larger volume, are used and the results with more accurate) If the concentrations of solutions had been 2.0M instead of 0.5M, clearly the temperature.

Device for converting the energy of a chemical reaction into electrical energy. Galvani or voltaic. The common galvanic or voltaic cell is that of zinc and copper strips deeper into 2M sulphuric acid and dipped in connected to a voltmeter by wire.

The voltmeter indicates the voltage of 1.0 the zinc being more electropositive than copper losses two electronics to form Zn 2+ which enter the solution. 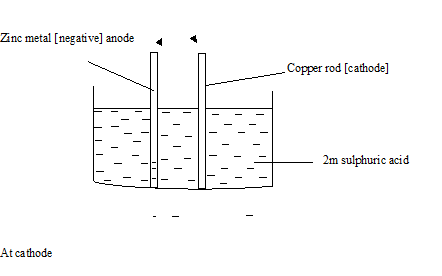 The electrons of zinc move through a wire to strip and hence hydrogen ions from the acid take up the electrons and form hydrogen gas bubbles. (bubbles of hydrogen formed on the surface of the copper metal) Hence the overall reaction is Reddox.

Note: copper is the cathode.

Anode        Electrons are negatively charged they move the negative to positive.

The hydrogen bubbles can be removed by

The cell can’t be moved from place to place without spilling content. (Robouk)

Is the modified galvanic or voltaic cell

Equation of the overall change   -Is got by combining equation for cathode and anode reactions.

It separates the two electricals. It allows 2-way movements of ions thus completing the circuit. 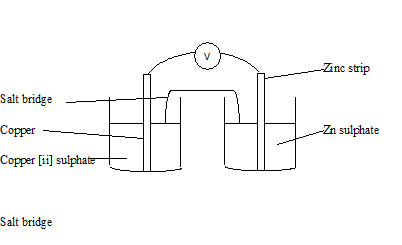 It provides electrical contact between the two electrical and problems of the salt bridge Daniel cell.

It can’t be moved from place to place but it does suffer from polarization.

Is the cheapest and most convenient cell used today? It’s portable.

Summary of reactions which occur

The zinc container is the negative electrode.

The carbon rod is the positive electrode, at which ammonium chloride is reduced to ammonia gas and hydrogen gas.

Problems of the leclanche dry cell.