Organic chemistry is a chemistry subdiscipline involving the scientific study of the structure, properties, and reactions of organic compounds and organic materials, i.e., matter in its various forms that contain carbon atoms.
Study of structure includes many physical and chemical methods to determine the chemical composition and the chemical constitution of organic compounds and materials.
Study of properties includes both physical properties and chemical properties, and uses similar methods as well as methods to evaluate chemical reactivity, with the aim to understand the behaviour of the organic matter in its pure form (when possible), but also in solutions, mixtures, and fabricated forms.
The study of organic reactions includes probing their scope through use in the preparation of target compounds (e.g., natural products, drugs, polymers, etc.) by chemical synthesis, as well as the focused study of the reactivities of individual organic molecules, both in the laboratory and via theoretical (in silico) study.

The range of chemicals studied in organic chemistry include hydrocarbons (compounds containing only carbon and hydrogen), as well as myriad compositions based always on carbon, but also containing other elements, especially oxygen, nitrogen, sulfur, phosphorus (these included in many organic chemicals in biology) and the radio stable elements of the halogens.

It is chemistry of carbon compounds expect oxides of carbon, carbonates, hydrogen carbonates and carbides.

Why Carbon is unique compared to other elements?

It has the ability to bond with itself to form long and short chain molecules.

The ability of an element to bond with itself to form long chain molecules is termed. Catenation.

Examples of hydrocarbon are;-

It’s series of a compound with a similar structure that can be represented by the same general formula. They have similar chemical properties and they are prepared by similar methods. Their physical properties are different depending on molecular size and molecular mass.

This is one in which all carbon-carbon bonds are single bonds, C-C. 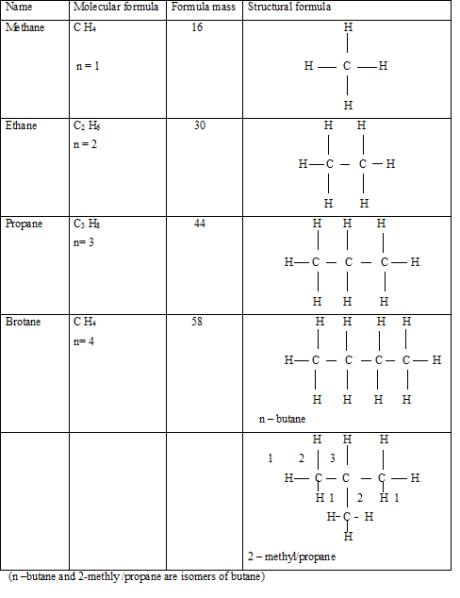