CHE3: NITROGEN AND ITS COMPOUNDS

The remaining part of air is mainly nitrogen. 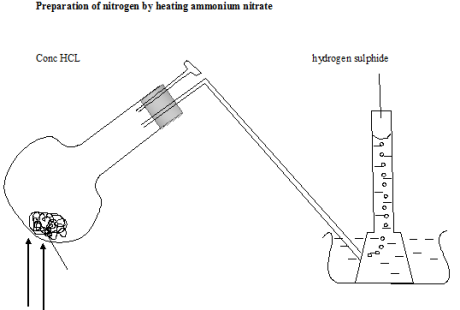 The apparatus is set up as shown in the diagram above. On heating, sodium nitrate reacts ammonium nitrate which decomposes to give nitrogen gas?

The gas is collected over water.

A VIDEO ABOUT ION FORMATION

Other methods for the preparation of nitrogen

The action of chlorine on excess ammonia

Reduction of oxides of nitrogen by heated copper

Nitrogen is chemically inert. It doesn’t support burning, has no smell. It has no effects on litmus and no effect on the lime water.

It’s slightly less dense than air and is only slightly soluble in water.

Under ordinary conditions, nitrogen is chemically inert. Inert nature of nitrogen is due to strong bonding n the nitrogen molecules.

The energy required to break the triple bond is high

In the presence of iron catalyst the moderate temperature (450 – 5000C) at high pressure. Nitrogen reacts with hydrogen gas to form ammonia.

Nitrogen reacts with magnesium calcium and lithium metals to form the corresponding metal which appears as white solids.