CHE3: CARBON AND ITS COMPOUNDS

CARBON AND ITS COMPOUNDS

Carbon is a non metallic element of group four of the period table with atomic number of 6 and electronic configuration of 2:4

The allotropes of carbon are;

It has two dimensional hexagonal layer structure in which each carbon atom is covalently bonded to three other therefore 3 out of 4 of the valency electrons are used in bonding (localised). The remaining electron is decalised outer the whole structure.

The vander waals forces can break and adjuscent layers can slide relative to each  other. This explains why graphite is soft and slippery.

Also used in pencil lids (mixture of graphite and clay)

Diamond has a tetrahedral structure in which carbon atom is covalently bonded to four other atoms as shown in the figure above.

All the valency electrons of carbon are used in the formation of covalent bond, therefore, are localized. This explains why diamond s a non – conductor of heart and electricity. (it doesn’t have free mobile electrons).

Diamond has a giant structure in 3 dimensions. The strength of diamond and uniformity of bonding make it very hard, not volatile and resistant to chemical attack. 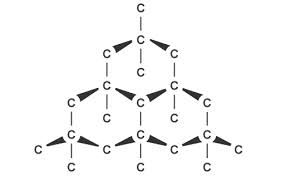 It is impure carbon it occurs in form of animal charcoal, wood, charcoal, soot coke, coal etc. it is make up  of sall crystals of graphite. It’s a black opaque solid.

It has a good absorption power and is used to purity substances especially solutions and gases. Impurities in solutions can be removed by boiling the solution with activities charcoal and filtering the mixture.

Granular amorphpous carbon has ability to absorb gases particularly the one of the most of the known toxic one.

The absorption property finds application in industries especially in sugr industry to remove the brown colour form sugar and in the manufacture of gas masks used in mine and by riot police.

It is prepared by heating woon in absence of air so that it doesn’t burn. (distrctive distillation of wood.) it is used as fuel.

Prepared by distrcive distillation of bones. Heating in absence of air. To remove brown colour from sugar.

Is a form of carbon

Used as a fuel because it burns to liberate a lot of heat energy. 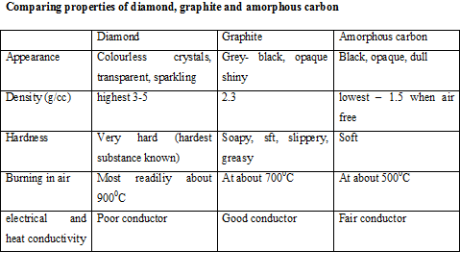 Therefore, used as a fuel

is a substance which burns to give heat energy.

They are either carbon or forms of  carbon.

Gas is a mixture of alkanes (carbon and hydrogen)

it is a mixture of carbonomoxide and nitrogen.

Criteria for a goo fuel (qualities).

Should burn easily without leaving a lot of solid residue

The biggest pool of carbon dioxide is in the atmosphere. It comprises of about 0.03% by volume of air.

T is also produced as waster product of respiration by plants and animals. It is also formed during combustion (burning) of fuels with contain carbon like charcoal, wood, petrol etc.

Some carbon dioxide occurs in solution in water like Lake Victoria, Kyoga, Albert.

Set up of apparatus for preparation of carbon dioxide gas

Calcium carbonate dissolves in the acid with effervescence evolving a colorless gas. Carbon dioxide which can be collected over water in which it is slightly soluble to give a weakly acidic solution.

If required dry, the gas is bubbled through water to remove hydrogen chloride gas and then through concentrated sulphuric acid to dry it. It is then collected by down ward delivery. (Carbon dioxide is denser than air.)

It is a colourless gas which turns blue litmus faint pink.

a combination of marble chips or (lime stone) with dilute sulphuric acid is not suitable for the laboratory preparation of carbon dioxide gas.

This is because marble chips or limestone react with dilute sulphuric acid to form insoluble calcium sulphate which stops further chemical reaction.

Therefore, reaction starts but stops after a short time.

In industries, carbon dioxide is obtained as a by – product of fermentation of sugars to 9alcohol and from the manufacture of cement.

Is incomplete of sugars to ethanol, carbon dioxide and heat energy.

It is slightly soluble in water forming carbonic acid

Effect of carbondioxide on burning magnesium

When a piece of burning magnesium is lowered into a gas jar of carbon dioxide gas. It continues burning for a short time wth spluttering flame forming black particle and white arsh of magnesium oxide.

Magnesium burns liberating a lot of heat energy which decomposes carbon dioxide to carbon and oxygen.

Therefore overall question is got by combining equations  (i) and  (ii)

When carbondioxide is bubbled into lime water the solution turns milky due to formation of insoluble calcium carbonate.

With excess carbondioxide, the milk solution turns colourless due to formation of soluble calcium hydrogen carbonate.

The white precipitate is filtered off and washed with hot water and is heated to constant mass.

Anhydrous sodium carbonate is a white powder referred to as soda ash. It is used in glass manufacture, soap preparation, sodium hydroxide and for softening water

Properties that make it a good fire extinguisher 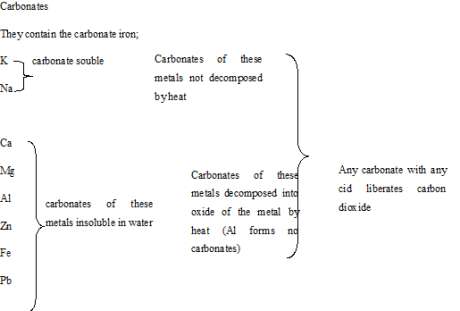 Effect of heat on carbonates

Carbonates of sodium and potassium are not affected by heating (do not decompose.) carbonates of calcium, magnesium, zinc, irom, lead ad copper decompose on heating to give the oxide of metal and a colourleess gas that turns blue litmus faint pink ad lime water milky. (carbondioxide)

It is a white powder, it decomposes on strong heating to give a colorless gas which turns blue litmus faint and lime water milky.

The residue is reddish- brown (orange when hot and yellow on cooling (lead (II) oxide).

White soli. On heating there is no colour change. This is because the carbonate and  oxide are white. Colourless gas is given off which turns blue litmus faint pink and lime water milky.

Preparation of some carbonates

A green precipitate is formed which is filtered, washed and dries.

The white precipitate is filtered off, washed with hot distilled water and dries.

It is prepared as a sublimate by heating ammonium sulphate with calcium carbonate.

Ammonium carbonate is used as a constituent of smelling salts because it decomposes readily to give ammonia which stimulates reaching.

The white precipitate is filtered ff and washed with cold distilled water.

Colourless (transparent) crystals of sodium carbonate, ten water, Na2CO3.10H2O (l) are obtained by dissolving anhydrous sodium carbonate in the minimum volum of hot ware and cooling the solution to obtain the transparent crystals.

It consists of large translucent crystals

On exposure to air, the crystals reduce mass and become coated with a fne white powder render then opaque.

Explanation; on exposure to air, Na2CO3·10H2O lose water of crystallization

Aqueous sodium carbonate is alkaline due to hydrolysis

Brine (concentrated sodium chloride solution) is saturated with ammonia and then carbondioxide. Carbondioxide reacts with ammonia solution to give ammonium hydrogen carbonate.

A VIDEO ABOUT EFFLORESCENCE

Less soluble sodium hydrogen carbonate is precipitated; the white precipitate is filtered off and is heated to constant mass.

The calcium oxide is warmed with ammonium chloride to regenerate the ammonium for further use.