Is one which absorbs water vapor from the atmosphere but not enough to development dissolve it to become wet or form a solution examples are; cement, milk powder, cigarettes, biscuits, anhydrous copper (II) sulphate, calcium oxide, copper (II) oxide.

Hygroscopic substances do not undergo a change of state when the absorb water from the air.

Deliquescent and hygroscopic substances are used as drying agents.

In the laboratory, some the hygroscopic and deliquescent substance are used to dry gases

This is one which gives up water of crystallization when it is exposed to air.

Iron rust is very important because: 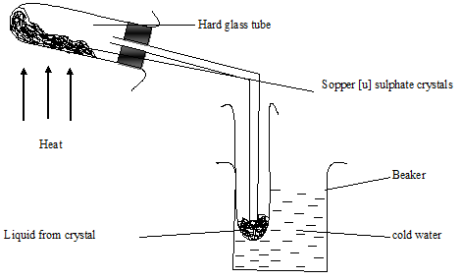 Deliquescent are solid that absorb water from the copper atmosphere until they dissolve in it example copper nitrate, anhydrous calcium chloride semi nitrate

Zinc oxide is yellow when hot and white when cold.

A crystal is a solid that has solidified in a definite regular shape.

Solids that area in crystal is called crystalline solids and those in power form are a amorphous solids, (shapeless).

Is none which cannot dissolve more solute at a given temperature in contact with un dissolved solute.

Solubility of substances depends on temperatures.

However, solubility of gases decreases with increase in temperature.

Nature of the solvent

It is one which contains more solute than it can hold at given temperature in presence of undisclosed solute.